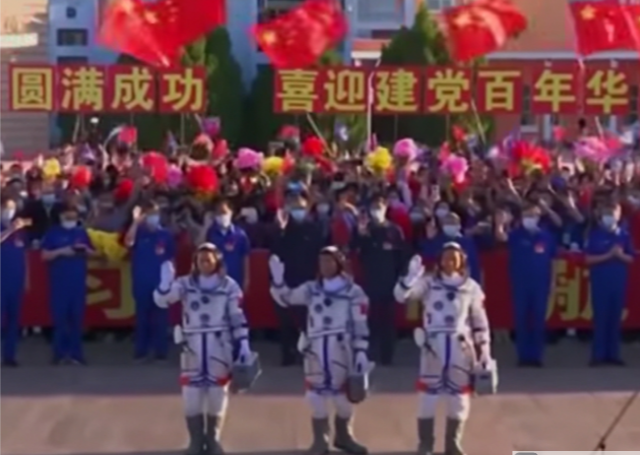 As NASA rolls out an “equity” mission aimed at recruiting “persons of color” and those belonging to the “LGBTQ+” community, Communist China has announced its plans to set up a base on the Moon and send a manned mission to Mars.

China has teamed up with Russia to build a lunar base. Earlier this month, the China National Space Administration (CNSA) and the Russian space agency, Roscomos, announced their intention to start the construction of a joint moon base as early as 2026.

Russia and China have presented a plan to build the joint International Lunar Research Station (ILRS). The proposed lunar base is intended to be ready for crewed visits by 2036 (…).

The development of ILRS is split into three phases. Reconnaissance is taking place now with missions such as Chang’e-5, which returned lunar rock samples to the Earth on 16 December 2020, and future Chinese and Russian missions. One or more sites will be chosen in the coming years and then the construction phase will begin. This will last almost a decade, with cargo and equipment being transported to the lunar surface via uncrewed ships.

Finally, in 2036, human visitors will arrive to begin scientific work and further building of the base.

China’s ambitions are not limited to the Moon. The Communist regime is working on a crewed mission to Mars. “China aims to launch its first manned mission to Mars in 2033 and build a base on the red planet in the following missions,” China’s state-run TV network CGTN declared on Wednesday.

China unveiled ambitious plans to send humans to Mars and build a base on the red planet at a recent space exploration conference.

Wang Xiaojun, the head of the state-run China Academy of Launch Vehicle Technology, shared a “roadmap of human Mars exploration” during a virtual lecture at the Global Space Exploration Conference held in Russia this week. (…)

The new plans for human exploration of Mars come shortly after China’s success with its Tianwen-1 mission, which reached Mars earlier this year and landed its rover last month, making China one of only three nations to successfully land a spacecraft on Mars. (…)

As part of the plan, Wang unveiled that China hopes to build a base on Mars and the development of a “large-scale Earth to Mars transportation fleet.”

The Chinese plans go hand in hand with its space militarization program. China has developed an array of space-based weapons that can be deployed in a military conflict.

Chinese armed forces, the “PLA continues to acquire and develop a range of counterspace capabilities and related technologies, including kinetic-kill missiles, ground-based lasers, and orbiting space robots, as well as expanding space surveillance capabilities, which can monitor objects in space within their field of view and enable counterspace actions,” the 2020 U.S. Defense Department reports on China disclosed.

China’s offensive space weaponry is aimed at the United States and it allies. “China is working to weaponize space with an array of capabilities intended to target U.S. and allied satellites as part of its ambitious plans to displace the U.S. in space,” the Defense News weekly reported in April citing the U.S. intelligence community’s 2021 Global Risk Assessment report.

China’s aggressive militarization of space comes as NASA has embarked on so-called “Mission Equity.” Not focusing on getting the best talent, NASA this month announced that is its looking to hire more “Black, Latino, and Indigenous and Native American persons, Asian Americans and Pacific Islanders and other persons of color” as well as “lesbian, gay, bisexual, transgender, and queer (LGBTQ+) persons.”

NASA reports that all astronauts have completed CRT. Mission accomplished! After reaching the top of Mt Affirmative Everest, what else is there to climb?

Quick show of hands, folks: how many of you want to fly in airplanes or drive across bridges designed by CRT-trained engineers who believe math is an example of “white supremacy”?

Have any of you seen “For all Mankind “ on Apple plus?
Excellent space/ NASA series as to what could have happened to our Space program if we hadn’t stopped and made NASA into a woke Muslim outreach and focused on the job at hand
Really inspiring

The Malaysian Space Agency (huh? who knew), a part of the Dept of Islamic Development Malaysia, wrestled with the greatest technical problem of the entire then-upcoming flight of going beyond the earth’s atmosphere. That problem, How to face Mecca from outer space?

The result, A Guideline of Performing Ibadah [worship] at the International Space Station (ISS), which concludes, “It is hoped that this guideline could assist the Muslim Astronaut to ensure the success of the mission and at the same time attaining the redha (pleasure) of Allah SWT.”

Liberal America Leading from the rear buy paying for it all.

This is simply the Democrat plan called surrender to the CCP.

NASA hasn’t done jack shit for real science in decades. It’s filled with ‘diversity’ hires and political toadies sitting on the government dole that couldn’t science their way out of a paper bag. EVERYTHING meaningful is done by contractors on the taxpayer dime.

Kids used to dream of being astronauts. Now NASA is a bad joke.

“EVERYTHING meaningful is done by contractors on the taxpayer dime.”

And once those contractors go Full Woke even that pittance will stop. Forget the Moon and Mars: in a few years the planes will start falling from the skies, the bridges and dams will start collapsing, and the water and lights will start going out.

That’s simply not true. NASA has landed numerous landers on Mars – they just landed one last month. They did the first flight of a helicopter on Mars, which has almost no atmosphere. They have launched missions to collect samples from asteroids, so we will know if they can be mined. Those samples are on their way to earth right now. They will launch a mission around the Moon as a test of the Orion capsule. They have the Artemis mission planned in the next few years to land on the moon again, and they will have an orbiting Lunar Gateway, which is a space station that will enable easy moon access. They will soon launch the James Webb telescope into space, that will revolutionize and replace the aging Hubble telescope. They are doing lots of science, including lots of missions to figure out where planets are around other suns, what dark matter and energy are, they have sent orbiters to Jupiter and Saturn and found amazing things. They are doing real science. The only question is whether Democrats will screw NASA up so bad by focusing on “The First WOMAN on the moon” or the first BIPOC on the moon, etc. If they do that, NASA Is finished.

The Cassini mission in 2017 found an ocean of water under the ice of Saturns‘ moon, Enceladus.
This ocean was erupting geysers into space.
The probe then flew through the geysers sending water into space and analyzed it.
Since the discovery was unexpected, Cassini had no instruments to detect life.
A follow on mission, Enceladus life finder, will fly through these plumes and look for signs of life.
Future missions will land, radar map the ocean, and maybe drill through the ice and launch an underwater drone to look for life.
If that is not science, I don’t know what is science.

Just imagine where we would be if the black community made Dr. R. McNair (who tragically died in the Challenger disaster) a hero to be emulated instead of some person pretending to be a performer screaming obscenities into a microphone.

At least MIT has a building associated with the space efforts on campus named after him.

Thanks to decades of industrial espionage and the bizarro decision by US politicians and plutocrats of both parties to fund Chinese labs and businesses, the first humans to reach Mars will almost certainly be carrying the Chinese flag.

Meanwhile, the Communists who have seized power here will struggle to keep the lights on and the water running. The only spacefaring organization left in the US is SpaceX, and it is only a matter of time before the Communists demolish that company through taxation and regulation. The Biden* regime will succeed in building concentration camps and exterminating “white supremacists” instead of lunar bases.

But the important thing is: no more mean Tweets, amiright?!

Pete Buttigieg, as secretary of transportation, has announced his intention to leapfrog the Chinese. He has pledged his intention to, within this decade, land a man in Uranus and return him safely to Fire Island.

I’ll believe in people settling Mars at about the same time I see people settling the Gobi Desert. The Gobi Desert is about a thousand times as hospitable as Mars and five hundred times cheaper and easier to reach. Nobody ever writes “Gobi Desert Opera” because, well, it’s just kind of plonkingly obvious that there’s no good reason to go there and live. It’s ugly, it’s inhospitable and there’s no way to make it pay. Mars is just the same, really. We just romanticize it because it’s so hard to reach.” — Bruce Sterling

All of this Moonbase and Mars Colony bollocks is nonsense CCP propaganda intended to distract you from this:

the “PLA continues to acquire and develop a range of counterspace capabilities and related technologies, including kinetic-kill missiles, ground-based lasers, and orbiting space robots, as well as expanding space surveillance capabilities, which can monitor objects in space within their field of view and enable counterspace actions,”

LEO is the ultimate high ground.

Lots of people are going to die before any of them even successfully land on Mars no less return alive. It might as well be Chinese. Personally, I believe this is a huge waste of money with most of that money spent on technology required to keep people alive on manned flights. We can learn plenty with unmanned missions accomplishing the same things using robots and other technology. Save the manned stuff for the moon base. We need that platform.