“Protesters had previously tackled and punched the man, who fled to the hotel for safety.” 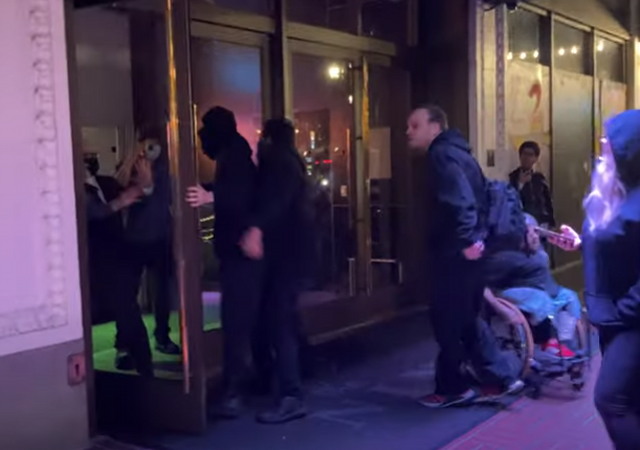 This weekend, an angry Antifa mob surrounded a hotel in Portland because they thought journalist Andy Ngo was there. So they screamed and banged on the windows. Ngo is known for his reportage on the left-wing group.

The NBA team, the Denver Nuggets, was staying at the hotel at the time.

Before the mob formed at the hotel, some Antifa members chased down the man they believed was Ngo and punched him on the sidewalk.

The Denver Nuggets basketball team was staying in The Nines hotel in downtown Portland on Friday night when leftist activists surrounded the building in pursuit of a man they believed to be conservative author Andy Ngo, WW has learned.

Riot police arrived at the hotel shortly before midnight on May 28 and formed a perimeter at the intersection of Southwest Morrison Street and 6th Avenue for the next 30 minutes.

Sources familiar with the Nuggets’ travel arrangements say the NBA team stayed at The Nines during its two-game road trip to Portland for the playoff series with the Trail Blazers. The Nuggets arrived in Portland on May 26 and left May 29.

That means the team was inside the hotel when the crowd pursued the man they believed to be Ngo to the concierge desk of the hotel, then pulled on the doors and confronted Nines staff in a chaotic scene. Protesters had previously tackled and punched the man, who fled to the hotel for safety.

The man the crowd sought rode up an elevator into the hotel as people banged on the windows outside. At 11:55 pm, police secured the nearby intersection in order to make an arrest.

After police left the scene at 12:30 am, they used a sound truck to broadcast a warning to the crowd: “Anyone who is not a guest of The Nines may not enter the hotel. Do not enter or damage The Nines hotel property.…Move away from The Nines hotel now.”

Here’s a short video showing some of the Antifa folks screaming like lunatics outside the hotel:

Why is this group allowed to act out in this way? They’re a menace to their community.

“He ran for blocks until someone in the pursuing group tackled him—at Southwest 4th Avenue and Morrison Street—and punched him several times after his head hit the brick sidewalk.”

Antifa brutally assaulted an Asian man they believed to be Andy Ngo. https://t.co/f8g4aeqRuN

Will the woke NBA say anything about this?

I expect full throated condemnation from the NBA any minute now. https://t.co/dRt7HR7DZN

ANTIFA assaults an Asian Journalist, chases him in to a hotel, and forms a lynch mob outside and the mainstream media only covers the story because the Denver Nuggets happen to have been in the hotel at the time.

You mean the team didn’t head downstairs and go outside to take a knee with the sniveling little anarchist punks? I guess that’s only important when they’re safely inside a sports arena with the cameras on them.

Charges against Ngo for inciting this regrettable activity are pending.

Andy has also been silent on Twitter since the incident. Hoping he is ok.

Portland is the canary in the coal mine.

Portland doubles down on its collapse,

Portland’s collapse is our collapse.

We are battling the left, the swamp, Red China and OUR OWN GOVERNMENT.

Worse, we are battling the Republican establishment, who wish us as much horror as the left and Red China.

We live in an ungovernable nation now. We do have a leader we trust (Donald Trump) and we are 75,000,000 strong (and of good stock, possessing good work ethic and excellent skill sets). We need to get the hell out of what is posing as America.

We need to secede. Our lives will be great again.

I agree. We are beyond unity

Worse, we are being targeted by our own government:

Joe Biden: ‘Terrorism from White Supremacy’ the ‘Most Lethal Threat to the Homeland’

They’re looking for their Reichstag Fire moment. And it’s coming.

Nothing says Andy Ngo overreacts and does shock reporting like chasing the man down with a mob of your soyboy beta buddies and trying to beat him senseless…..yeah, he totally overreacts lol!

Andy’s got balls the size of Trumps’.

“…an angry Antifa mob surrounded a hotel in Portland…”

I don’t think so. This should read–

“…a hired Antifa mob surrounded a hotel in Portland…”

This is an army on an assignment. “Angry” = BS narrative. We are helping them when we use their BS.

Antifa and Blm are not different than the Brownshirts of Nazi Germany, or the Red Guard of Communist China.

We’re at this point. Face it.

“This is an army on an assignment.”

I think you give them too much credit . . . at least their rank-and-file.

Their anger is a result of the angst and alienation of contemporary life, fed by an endless stream of propaganda and horror from our “fourth estate” that has encouraged them to play with violent revolution and so they join antifa. They join because the teachers of these affluent children (no coincidence that they are mostly white 18-30-year-olds) and the majority of those with any cultural influence, including virtually all of our public institutions, have told them that the source of their problems is the Great White Capitalist Devil.

These dilettantes will eventually get a dose of realpolitik if this keeps up, but I am getting impatient.

As long as the Propaganda Wing of the Democratic party remains a source of positive PR for these criminals, they will continue to act (at least in Portland and their other strongholds) with impunity, and any serious street-fighting opposition will be labelled as “far-right extremists,” “white supremacists,” the “alt-right,” or, of course, “Fascists,” since anyone opposed to a presumably “anti-Fascist” organization must be “pro-Fascist,” right?

Look what happened to Gavin McInnes.

But then again we already knew just how racist Leftist/Progressives are.

The leftists are always talking about “white supremacism,” like it is a real thing, while ignoring the outright violence and destruction, based on mob mentality, against the left’s perceived enemies.

Does this say more about Portland or pantifa?

Is this “stupid supremacy” or the left redirecting its history against minorities towards Asians?

I note that the article said:

“The man the crowd sought rode up an elevator into the hotel as people banged on the windows outside. At 11:55 pm, police secured the nearby intersection in order to make an arrest.”

Note that there is absolutely nothing to say that the person arrested was part of the lynch mob. And even if he/she/it was arrested as part of the lynch mob or for other crimes connected with said mob, in Portland you will never see anything in court records that said person was formally charged with anything, or that any bail was required. They do that deliberately. When things finally break down, do not expect or give any quarter.

Worse, “in order to make an arrest” doesn’t actually imply they necessarily managed to make one.

Yeah it wouldn’t be impossible to send 30 LEO down with a bus, create a cordon and arrest a dozen of these yahoos. Full booking, take prints and photos. Run the names through and see what pops up for warrants ECT.

That response isn’t ‘heavy handed’ its basic. That the political leadership in some locations refuse to do so sends a clear message that they are not serious about stopping the mobs.

“Why is this group allowed to act out in this way? They’re a menace to their community.”

Personally I’m gonna laugh my ass off when a whole bunch of these antifa fucks get massacred. Somebody is going to have enough, and getting these stupid pricks to walk themselves into an ambush would be mighty easy.

From your lips to God’s ears.

When it does happen, my guess is that it will be the action of one disgruntled citizen, who will immediately be labelled any, several, or all of the usual epithets: “white supremacist,” “alt-right,” “white nationalist” and . . . yes . . . the dreaded “Fascist.”

We need to win, or at least gain some advances in, the propaganda war before any anti-antifa street action gets any credibility or support.

I basically agree, though, that “turn the other cheek” no longer applies when you run out of cheeks.

This is the dictionary definition of terrorism, but naturally the deep state loves it.

All of this is completely sanctioned violence by the government of the City of Portland and Oregon’s Governor.

I can’t believe more aren’t calling it that.

If Smollet said a mob of MAGA hat wearers chased him (again), they would actually investigate it with more rigor than they do this.

Well they sure as shit had the resources to shut down a Christian Baker for not baking a gay wedding cake. Maybe that team should go after antifa.

The Dhimmi-crats have, at every opportunity, enabled, whitewashed, lionized and otherwise empowered the goose-stepping, jackbooted terrorist-thugs of their paramilitary cadres in “Anti-fa” and in “Black Lives Matter.”

Does dishonest, feckless and morally stupid AG, Merrick Garland, still contend with a straight face that “white supremacists” allegedly constitute the greatest domestic security threat to the U.S. and to civil order, while turning a blind eye towards the Dhimmi-crats’ vengeful terrorist-thugs and their thuggish violence and intimidation? Undoubtedly.

Hey ho, hey ho, Andy has got to Ngo. Cancelled, that is. Lynch mobs. One step forward, two steps backward.

Looks like an out take from “The Omega Man…”

Please stop referring to Ngo as “conservative”. Ngo describes himself as a liberal who leans left on many issues.Using the term conservative feeds into Antifa’s narrative.They want themselves portrayed as fighting the right when in reality they are against any sane discourse and despise sane leftists as much as they hate the conservative, the right, Republicans…. ..