“We are the people, we have a voice, our votes are our weapons, and we will use them in 2022 and beyond” 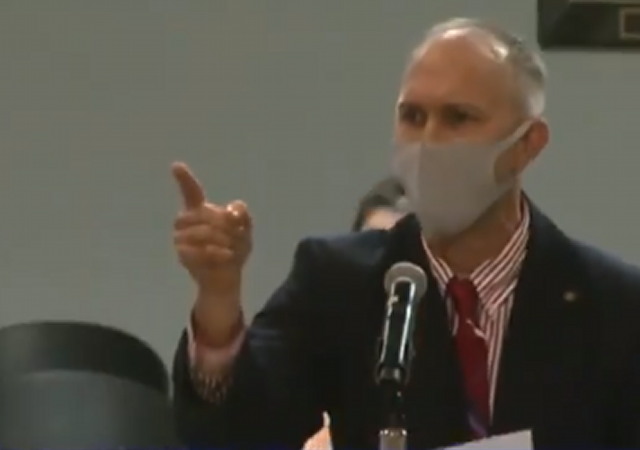 One positive thing to come out of the pandemic and school closures is that people’s eyes have been opened to what is being taught in American schools.

Angry citizens are speaking out and getting more involved with school boards.

In Florida, a video of a veteran reacting to his school board’s ‘racial equity statement’ is going viral.

Andrew Mark Miller of the Washington Examiner has details:

A Florida military veteran went viral this week after delivering an impassioned speech at a school board meeting railing against the district’s recent racial equity statement.

“The school board recently adopted an equity statement. Why? Your only job is education, not indoctrination,” the unidentified man shouted at the Palm Beach County school board, resulting in cheers from the audience.

“Attention board members: Our nation is a republic! We are the people, we have a voice, our votes are our weapons, and we will use them in 2022 and beyond,” the man continued. “We in the military, our blood, our sweat, is the equity. It is courage, character; not color, not gender, that makes this nation great. Working Americans are united, we are not divided. Stop trying to incite division among us.”

“We are Americans first, and we will be free always,” he said at the end of the clip.

“Your only job is education, not indoctrination!” pic.twitter.com/gx75XZz2t2

At least Florida has Governor Ron DeSantis. He has been pretty clear on his views of this.

Governor Ron DeSantis denounced Critical Race Theory during a press conference in Pensacola Friday morning, saying he would stop it from being taught in Florida’s public schools.

DeSantis held the press conference to announce a series of tax breaks for consumers. When asked about Critical Race Theory, DeSantis responded, “You can put lipstick on a pig, it’s still a pig.”

Critical Race Theory examines the ways in which race and racism influence American politics, culture and the law.

The governor said it was offensive to taxpayers to teach Critical Race Theory in schools, claiming the theory teaches children to hate their country and each other. According to Purdue University, Critical Race Theory scholarship shows how racism continues to be persuasive and why it denies individuals their constitutional rights.

“Your only job is education, not indoctrination”

They don’t see any difference. The sentiment falls on deaf ears.

Yes, a nominally “secular” religion (i.e. behavioral protocol), traditions and parades, priests and priestesses, inculcating the principles of the Pro-Choice religion (e.g. diversity dogma, inequity, and exclusion) as dictated by mortal gods and goddesses under the government umbrella.

While I agree with what he said I have a couple of things. First, stop the damn pounding on the podium. Does nothing but distract and is annoying. Also instead of fumbling around with that face diaper, sorry, “mask
simply take it off, make your statement and then put it back on. And three, no need to fucking yell at the end. I’m sure the school board wrote you off and were ignoring you from the beginning of your statment. Just my 2¢

The more noise—the better. And I say that as a 50+ year practicing psychiatrist and neurologist, from the standpoint that the left doesn’t give an Adam Schiff about appearances—it’s all about the noise that opposition creates. And you are a naive jerk for suggesting otherwise!

A lot of us are getting too old to care much about governmental punishments, and are out of patience with traitors trying to tear down what our ancestors built up.

You reach a certain age where Life in Prison is no longer much of a deterrent.

Sometimes nasty internal corporate fights entangle decent people. One case I ran into involved a man who happened to be black. It was not about racism. I tried and was unable to save his job, but I did help him find another, he did improve his wages.

MLK wanted justice, I bet he would really, those who followed are just users, they tarnish his legacy.

I grew up with the pledge of alligence, it needs to return.

The mask sort of diminishes the message. If you want to start a revolution, you have to learn to rebel against governmental overreach.

Citizens don’t run the schools, the school board does, at least nominally. In actual fact the teacher’s union runs the school, and they can basically teach what they want since they can’t be fired. What is the parent going to do if they can’t afford private school on top of their substantial property taxes? Nothing, that’s what, since they can’t send their child to a different public school (which is probably teaching CRT too).