Another man watched the guy beat one of the women before he slipped out of the store. 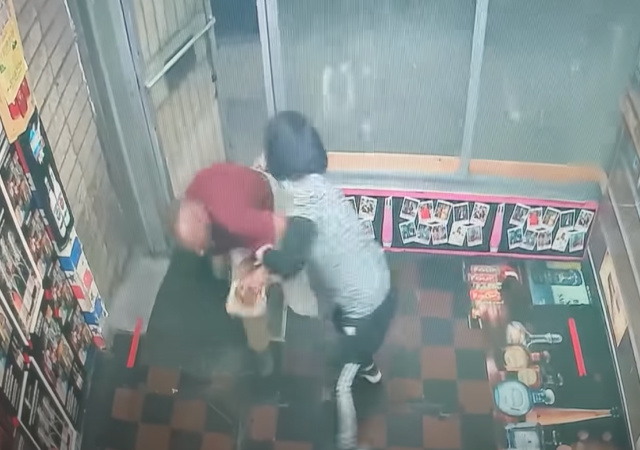 The victims were liquor store employees who were closing up shop Tuesday morning when Daryl Doles, 50, allegedly broke into the store and attacked them, according to the report.

Surveillance video shared by the outlet shows the man wrestling one worker to the floor and hitting her with the cinder block, while an unidentified cowardly man in the store appears to step aside and watch the attack before calmly walking outside.

The other woman tried to help the woman on the floor, but the attacker then hit her with the cinder block. He took off after the fight went outside the store.

Authorities charged Doles with two counts of aggravated assault and a weapons offense. They have not said yet if they will seek hate crime charges.

The two women did not have life-threatening injuries:

Both women were taken to the hospital and treated for non-life-threatening injuries, police said.

Photos posted on a GoFundMe fundraising page for the victims showed the women’s bruised and swollen faces. John Yun, who said he is the son of one of the victims and nephew of the other, wrote that his aunt suffered black eyes and had to get more than 25 stitches on her head.

“We are relieved that both of their CT scans came back good and were discharged hours later,” Yun wrote.

“First and foremost, our family would like to sincerely thank everyone for the support during these tough times for my mother and aunt,” Yun wrote on the page. “Words cannot express all the love and compassion my family has received during this extremely tough time. It is truly comforting to know there is still good in this world. We are grateful to know we have family, friends, and even supporters who will stand by our side.

“Our family would like to thank everyone from the bottom of our hearts.”

Seems you found the supremacist and he ain’t white.

Characters like this deserve to die on the spot. Most of our social problems come from recycling scum to repeat their crimes.

But, but… they were just starting to get their life turned around! Think of the volunteer work they do at the old folks home!

Have we seen kindergarten graduation photos of the perps yet?

He gonna be a doctor.

One should be behind the counter and have access to a gun.

I’m not going to judge the customer who booked at first opportunity.

In today’s society, the moral duty to defend an innocent stranger is overwhelmed by the justice system tyranny that inevitably follows.

One instructor phrased it this way: if the convenience store lady told you she needed a huge sum of money for chemo, you wouldn’t offer to empty your bank account to save her life, impoverishing your wife and kids; why would you make precisely the same deal to shoot her attacker? Immensely harsh, but logical.

This. So much this.

And, it’s sad. Helping someone in danger and end up in court.

not quite an accurate comparison vis a vis the video in this post–more accurate, one of the women in this video, under violent attack, appeals directly to you for help–now what?

refuse to be constrained by the “legal system” in coming to the aid of an innocent person under attack–the issue is not concealed carry–the issue is whether or not you’d feel compelled to introduce lethal force into the situation when, based on your training(or lack thereof), it may not in fact be necessary

there may be instances in this life where you will be forced/compelled to act without having a firearm at hand and those are the times(in addition,of course, to armed confrontations)you need to train for–and train regularly

said another way, and perhaps just my personal view, would not have felt the need to shoot this guy(he’s swinging a rock, for kryst’s sake) but rather to
seriously phuck him up

Not just the lack of a hate crime enhancement, though in this case it isn’t clear that he attacked that store because it was staffed by Asians.

Given that he was striking those women in the head with that cinder block, aggravated assault is a gift.

There can not be a hate crime enhancement because the victims are not a specifically listed “identity group”.

This is just one of the reasons why black people are never charged with hate crimes.

They aren’t written in a neutral manner as “bias crimes” where you get the enhanced penalty if you are targeting someone because of their identity group. Instead, they specifically list the protected identity groups that the law protects, and omits all others.

Yup, this is an assumption that we on the right routinely make, but we’re wrong. Not only are hate crimes committed by blacks at more than twice the rate of any other ethnic group, but it appears that law enforcement statistics officially confirm this.
Take a look at the sixth graph here.

Hmm, it’s interesting that #STOPASIANHATE is no longer trending. Wonder why that is…?🤔

For those unaware, this is sarcasm. We all know #STOPASIANHATE is no longer trending.

Funny how this sort of shit rarely happens in locales where people conceal carry and otherwise exercise their 2A rights.

This could have been George Floyd had he lived.

consider weapons of opportunity–bottles of liquor/wine upside the head, a broomstick to the eye, car/store keys to the throat–and train yourself, train yourself

agree to an extent on intervening to help/save a stranger but if the assailant is armed(with an edged weapon or a firearm) and you’re in close proximity, then there is a very real possibility that you will be next

This dude is trash, manure, pure grade A manure!

My kid can beat up your honor student bumper sticker.

. . . while an unidentified cowardly man in the store appears to step aside and watch the attack before calmly walking outside.

I don’t know. That guy looks more drunk than cowardly to me. But that’s my opinion.

if Obama had a son,
well maybe the criminal is a little too dark skinned for biracial Barrie

It is worth mentioning that the victims were Asian, but not that the assailant was Black?

Interesting. That is what I expect from the media, but I thought LI was better than that.

These are not the white supremacists you are looking for.

Too bad the women didn’t have a LTC, this vermin deserved “2 in the hat”.

Can someone explain why this isn’t assault with a deadly weapon and attempted murder?