“Rutgers deplores hatred and bigotry in all forms. We have not, nor would we ever, apologize for standing against anti-Semitism,” Rutgers University President Jonathan Holloway posted sometime Saturday in response to the backlash. 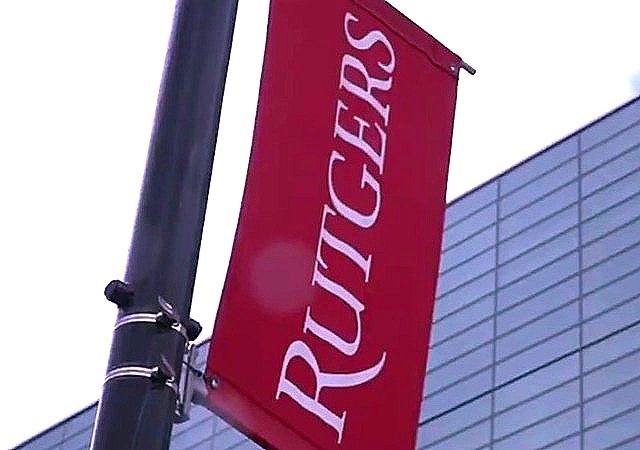 We reported Saturday that both the chancellor and provost of Rutgers-New Brunswick issued an apology to students the day after penning a letter condemning and pointing out the rise of anti-Semitism in America.

In the condemnation letter they posted Wednesday, Rutgers-New Brunswick Chancellor Christopher J. Molloy and Provost Francine Conway wrote that the “recent resurgence of anti-Semitism demands that we again call out and denounce acts of hate and prejudice against members of the Jewish community and any other targeted and oppressed groups on our campus and in our community.”

The letter referenced the current Israeli-Hamas conflict but in neutral terms while noting they hoped Rutgers could “serve as a model for institutions that respect and value the dignity of every human being.”

Not long after that letter went out, the Rutgers-New Brunswick chapter of the Students for Justice in Palestine group complained about how the letter of condemnation focused primarily on anti-Semitism instead of focusing on the alleged experiences of the Palestinian people. The group also demanded an apology.

They got one the following day. In it, Molloy and Conway said that “while the intent of our message was to affirm that Rutgers–New Brunswick is a place where all identities can feel validated and supported, the impact of the message fell short of that intention.”

“In hindsight,” they continued, “it is clear to us that the message failed to communicate support for our Palestinian community members. We sincerely apologize for the hurt that this message has caused.”

Not surprisingly, the apology letter was not enough for the members of the SJP, who are also proponents of the anti-Semitic BDS movement.

But sometime Saturday, Jonathan Holloway, who is the president of Rutgers, The State University of New Jersey, stepped in to address the controversy by overriding the apology letter from the New Brunswick leadership and posting a statement of his own:

Rutgers deplores hatred and bigotry in all forms. We have not, nor would we ever, apologize for standing against anti-Semitism.

Neither hatred nor bigotry has a place at Rutgers, nor should they have a place anywhere in the world. At Rutgers we believe that anti-Semitism, anti-Hinduism, Islamophobia and all forms of racism, intolerance and xenophobia are unacceptable wherever and whenever they occur.

In addition to posting Holloway’s letter to their website, we learned via longtime blogger and Legal Insurrection reader Gary Fouse that Rutgers also apparently redirected the original two links from last week to his Saturday statement, which is why I’ve included the archived links to the original letters throughout this post.

Well isn't that something. The Rutgers chancellor has locked down his Twitter account for some strange reason.🤔 pic.twitter.com/yWYUZDi0bv

Holloway’s statement was posted after the Jewish on Campus group went off on the university for reversing course on their original statement condemning anti-Semitism:

Regardless of what Holloway had to say, these comments from Ben Shapiro still hold true in my opinion, at least as far as Rutgers-New Brunswick is concerned:

In which the chancellor of Rutgers says the quiet part out loud: that anti-Semitism and hatred of Israel are intertwined, and that you can't condemn anti-Semitism without offending the Israel-haters https://t.co/yT6G5aHWZI

The moral of the story here? As conservative talk show host Dana Loesch often says, never, ever bend the knee to left-wing outrage mobs. Ever.

Note: The headline and body of this post have been updated to reflect the precise campus. The original two letters came from Rutgers-New Brunswick. Holloway is the Rutgers University president.

Rutgers could save mucho dinero by firing their top administration and replacing them with a Magic 8 Ball.

In addition, Mr. HB, when speaking of “mucho dinero,” I’m curious as to how many Jewish alums called rutgers to threaten future donations to the school’s endowment and scholarship programs? Money talks….old money shouts!

That’s what you get when you try to serve two masters.

Serving ones principles is a better path whan serving a master.

When the inmates run the institution, the product produced is distinctly of a poor grade. While I am not in a position to hire these days, a degree from Rutgers would be a blackball in my opinion.

It’s so hard when you can get your virtue signally right.

One thing all at Rutgers agree upon – all problems can be traced back to “white privilege” and to Trump.

Give it another day or so and they will come up with a new Press Release that blames whites or Trump for not being able to get their virtue signaling right.

So they unapologized? Is that allowed? It isn’t even a word, yet.

Rutgers has never had much of a reputation, but what it did have is now gone.

Apologies will never be sufficient. No amount of groveling will be enough to satisfy the people who elevate tribalism. A simple ‘no thank you’ is the best response to their demands.

Are there those who love Jews but hate Israel?

I doubt it, I value Jews, I see no reason to hate Israel. I have empathy for them, surrounded by stupid, psychotics. What would we do in America if someone was intentionality terrorizing us in they way they have done with Israel?

I appreciate people with spunk, those vigoursly defend themselves.

There are some, but they don’t support the “Palestinians” either.

I can think of only three non-antisemitic reasons to oppose zionism:

1. Anarchy. If you oppose all states, then naturally you oppose Israel too. Israel is a state, and therefore anarchists think it shouldn’t exist. But of course they are also against replacing it with a “Palestinian” state.

2. Pacifism. If you’re a Mennonite, or a Jain, or for any other reason you believe it is always wrong to use violence, even in self defense; if your heroes are the Moravians who allowed themselves to be massacred by Indians rather than raise a hand to harm their attackers, then you obviously think the Jews have no right to defend Israel. Of course you also think the Arabs have no right to attack it, and you oppose an Arab state even more than you oppose Israel, because it would kill more people.

3. Religion. The vast majority of religious Jews and of rabbis opposed zionism and the establishment of the State of Israel, on the grounds that God exiled the Jews and they must wait for Him to release them; reestablishing Jewish independence by force of arms is like a prisoner breaking out of prison and returning home before his sentence is up. After the fact of independence, most religious Jews reluctantly accepted that however much the state shouldn’t have been established, it is now a reality and must be dealt with and supported, A small but loud minority continue to oppose it.

PS: There is also a very small group (something like 40 individuals worldwide) of religious Jews who publicly support the “Palestinians” and Iran; but they are clinically insane and not representative of anyone.

How about 4) Policy … you can be critical of the Israeli state and its policies without being anti-Semitic. Its pretty daft to conflate criticism of Israeli policy with ant Semitism without reference to the policy specifics.

This is inaccurate. They are not chancellor and provost of Rutgers University, but only of the New Brunswick campus.

Feckless dhimmitude and kowtowing to Muslim supremacists/terrorists/Jew-haters by school administrators is now standard operating procedure at every single American university.

When Rutgers apologized for the statement against anti-Semitism, who were they attempting to mollify, student Trump supporters?

It’s the whipped dog that yelps.

LOL student trump supporters the equivalent of the Easter bunny