The White House Press Corps would not have giggled or even smiled if Trump made this remark. Oh, it’s just Joe being Joe! 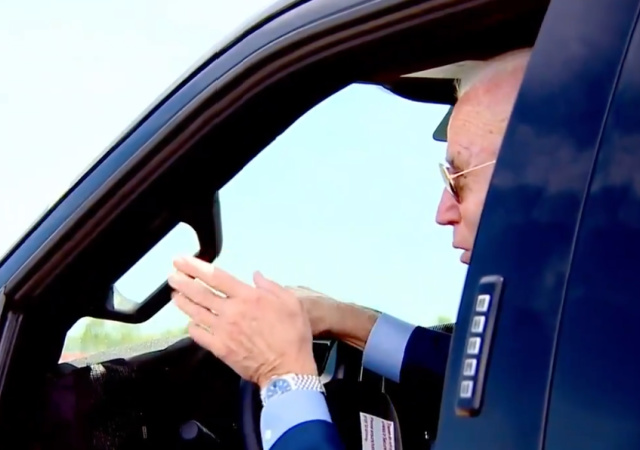 Normally I would let this go, but I have to point out the hypocrisy of the media whenever I see it.

REPORTER: Mr. President, can I ask you a quick question on Israel before you drive away since it’s so important?

BIDEN: No you can’t. Not unless you get in front of the car as I step on it. I’m only teasing.pic.twitter.com/A3jrsIi5mR

The most disturbing part? The media.

The media cried and whined from their crosses about Orange Man Bad calling them the enemy of the people. The martyred journalists screamed that Orange Man Bad committed violence when he called them fake news.

Biden tells a female reporter she can only ask a question on Isreal if she steps in front of the truck as he floors it.

The media? Laughter and giggles!

Surely one would think the White House Press Corps would have jumped to protect their own after Biden threatened her. He not only threatened a reporter, but he threatened a female reporter!

But hey! At least we don’t have Orange Man Bad mean tweets!

Then: "Trump said mean things to a CNN reporter"

Now: "Joe Biden wants to run reporters over with a truck, isn't he such a hoot? What a great guy" https://t.co/bPZqJRa5Q9

tbh the craziest part of this is not that Biden threatened to run them over with the car but the fact that the reporters there were just like “oh ok no more questions the man said so!” https://t.co/6c0BMdNraj

Laughing was NOT the appropriate response. If anything, these people should be pissed that Biden wanted to run one of their own over. It was Trump everyone would be like "oMg! oRanGe MaN bAd!" https://t.co/xUEMyH3LNU

Joe Biden: “I’m going to run you over with a pickup truck.”

This would’ve been regarded as a legitimate threat less than a year ago. https://t.co/GyTJbf3awM

Biden joking about running down a reporter for asking about Israel in an F-150 truck is a pretty good tell about just how performative the "how dare he" fainting spells of the past 4 years actually were.

Reaction from the gaggle at 1:29 is nausea-inducing. https://t.co/NGsJKaJtEG

How is this senile doofus allowed to drive?

He’s not. He just doesn’t remember he can’t.

A Bit Off Topic – But Topical

NY AG is looking at filing criminal charges against TRUMP.

The Progressives will hound him to his death. They want to Gaddafi him (knife up his a$$) if they can. They are insanely triggered by him.

The Progressive hellbent attitude to get Trump is summed by what Hilary Clinton said of her agenda to get Gaddafi – “we came, we saw – he died”

He probably had the left turn signal on the whole time

80 million people trust him with the nuclear codes and to execute the laws of this country? But you wouldn’t trust the President elected with the most votes in history to drive you somewhere? It must be you who is mistaken.

Sometimes I think his Alzheimer’s is a joke on us

Cruel joke that is

Reporters getting run over is cosmic payback for being awful people.

Proper response: Yes sir! Don’t worry. I always try to avoid getting in front of vehicles driven by senile old bastards. Definitely not good for the longevity.

As adorable as those nauseating images of Michelle Obama sweating in the White House:

Racial crime against whites and Asains has reached a critical stage. It is totally out of control becuase they have told over and over that they been wronged and they are full of anger and hatred and feel justified in doing so.

Michelle Obama is in a postition she could do something about it if she wanted to. For eight long years she and her husand did nothing positive, not one thing. And now she is going around speaking out at every opportunity fanning the flames and doing her utmost to make things worse.

On the other side of the spectrum, opposite the filthy ofal behind the wheel of that car:

With each passing day, the Dhimmi-crat media lackeys/lemmings/prostitute-propagandists further embarrass themselves with their obsequious fawning over Dhimmi-crats and hagiographic treatment of Dhimmi-crats, their brazen dishonesty and biased attitudes and their slavish antics; constantly singing hosannas to the vile Dhimmi-crats, while doing their utmost to denigrate and vilify Americans who reject Dhimmi-crat orthodoxies.

They are not capable of embarrassment.

If he actually ran over the reporter would we hear about from the drive by media?

In other news, a woman was arrested by Secret Service when he tried to interrupt an official government function. The woman, a reporter, was hospitalized and is in critical, but stable, condition. She will be arraigned on May 27. Secret Service is investigating the woman’s possible links to Trump and to White Supremacy groups and say she has known connections with anti-Palestinian, Jewish extremist groups.

That’s the headline if he had actually run over a reporter.

“May I ask you an important question?” words never heard during the Trump administration.

Reporters probably had to strain to keep from gagging while addressing POTUS Trump as Mr. President during any of his many press conferences.

I would have been one of those people !

Yet compared to this senile, dementi-ridden, retarded pedophile Trump now looks like a genius and moral paragon.

It was only to take a picture. He got out of the car as soon as the reporters left. And by the way, he was not joking. Since he got alzheimers he neither laughs nor jokes and can only produce the faintest of smiles.

Joe probably got the idea of running over a reporter during a recent watching of Death Race 2000, the 1975 sci-fi movie about a trans-continental race where the participants get points for every hit-and-run they commit. Sylvester Stallone was hilarious as the villain with severe anger management issues.

Remember when the Lightning was a cool truck? Now it’s a battery-powered joke.