Number of Births in U.S. Hits Lowest Mark Since 1979

Number of Births in U.S. Hits Lowest Mark Since 1979

“It’s not just Covid. It’s the fact that the birthrates never recovered from the Great Recession.” 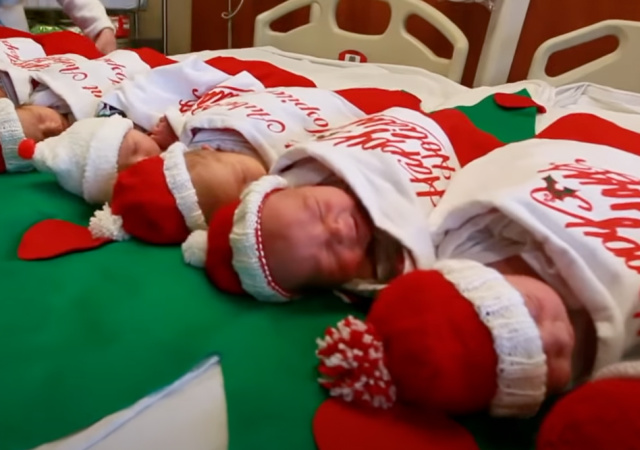 The Centers for Disease Control and Prevention (CDC) reported females in the U.S., Washington, D.C., Puerto Rico, and the Northern Mariana Islands only gave birth to 3.6 million babies in 2020.

It marks the sixth straight year of declining birth rates. It’s also the lowest since 1979.

It looks like the decline in births spans across all races:

Yes, you guessed it. The decline in GFR hit every race as well.

The provisional total fertility rate (TFR) is an estimate of “the number of births that a hypothetical group of 1,000 women would have over their lifetime, based on the age-specific birth rate in a given year.” 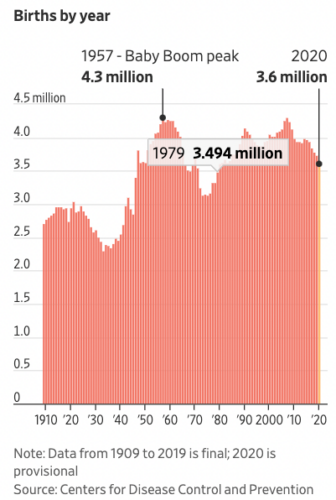 The world had a COVID-19 pandemic in 2020, but is that the real cause? It certainly did not help:

“It’s not just Covid. It’s the fact that the birthrates never recovered from the Great Recession,” said Kenneth Johnson, senior demographer at the University of New Hampshire. “I’ve been waiting for years to see a big jump in fertility to women in their 30s and it hasn’t happened.”

Prof. Johnson estimates that about 7.6 million fewer babies have been born as a result of lower fertility rates since 2007. He said separately released provisional monthly data from the CDC showed births declined about 7.7% in December. That shows a drop that was already under way before the pandemic and accelerated once the pandemic took hold.

I mentioned above how the stats show a steady decline of 2% every year since 2014.

The study’s co-author Dr. Brady Hamilton said “it was too soon to gauge the exact impact the pandemic had on fertility.”

Millennials chose to postpone family life years before the pandemic. They’re marrying later in life, which results in late pregnancies.

But nobody wants to mention the elephant in the room.

I agree. Marriage has become a dangerous proposition for men. They marry, father some kids. Then the militant feminist he married bleeds him dry in court and his kids are alienated. So, MGTOW..

Yes, funny how “feminists” are so fond of cutting men out of the child’s life (including the ability to have input on aborting his child against his wishes), demanding support, rejecting any moral or ethical input, and basically making men sperm factories with wallets. I’m not a fan.

Masculinists on one side. Feminists on the other. Neither have the best interests of men and women who are trapped in the middle in mind.

Miss Slippers: a thought. How many Amber Alerts involve a father who was cut off from his kids, then, finally lost patience, picked the kid(s) up at school and took them for a burger or for a good time at the local laser tag place?

I shut off the Amber Alert things on my mobile, and on my “storm radio”. One storm radio I had didn’t give you the option so I got rid of it and got another storm radio; this one does.

Aw, Grizz, you can call me Fuzzy or Fuzz, since we’re buds. I think we need to rethink the parental role of fathers in our society; as is, men are just sperm donors outside the leftist-despised family unit. That’s not right on any level, custody rights and Amber Alerts included.

I was raised with manners, so tend to be a bit formal at times. As I joke with people, I just LOOK mean.

Sure wish I could get this avatar/gravatar thing figured out. I opened and closed things and accounts so many times, I turn up in some places (gamauthorty.com) and not in others (here).

That’s the elephant? Really, we know from studies that this is biological ie the sperm count has gone down. Marriage has literally nothing to do with it.

Indeed. I wonder how the numbers would look if abortions were reduced by eighty percent.

A society that cannot be bothered to reproduce at a level that will sustain its current population will eventually be replaced by one with a growing population.

I would also like to see. As I understand (quite willing to be corrected with data), abortions in some segments of the Black population near or exceed live births. Blacks overall? Doubt it is that bad.
Figures don’t lie, but liar figure.

Not quite there yet. Black abortions are running about one for every three live births. (I’m not sure how you square this with reports from the same source that the abortion rate per person among black women is only about 2%.)
https://disrn.com/news/cdc-reports-117626-black-children-aborted-in-one-year-over-a-third-of-total-abortions-in-us

Our lefty overlords are importing millions of poor, illiterate third-world residents to replace us. They have none of that stubborn American DNA, so they’re much easier to manipulate, and they reproduce at much higher rates. Win/win for the left.

“I’ve been waiting for years to see a big jump in fertility to women in their 30s and it hasn’t happened.”

Maybe it *did* happen–but then that was gotten rid of.

Both here and other countries why are we concerned about birth rates with automation on the brink of driving many millions of jobs into extinction?

A lower population would mean that a world of more automation doesn’t have to be a world of a larger underclass.

They’ve been saying some version of that for about the past century or more. Never comes to pass. More jobs are created, just in different areas.

Modern family and the second shoe. Plan, or rather, unPlan, accordingly.

another factor not discussed, declining testosterone levels in males
https://www.urologytimes.com/view/testosterone-levels-show-steady-decrease-among-young-us-men
“We’ve seen that lower values of testosterone have been associated with increased comorbidities and an increase risk for all-cause mortality. This decline specifically, in these young adult men, with increased obesity may lead to an increase in precocious cancer,” Lokeshwar said, adding such decreases can also result in a lower libido and an increased risk for erectile dysfunction.

I have no idea what is causing all of this, but, I wonder if it is the fact our food isn’t really food anymore? Much is packaged in plastic. The list of ingredients for many packaged foods shows tens of ingredients where their equals from 30 years ago had maybe 10 to 15% as much.

In short, many of us are eating garbage. Walk through a supermarket and it’s carbs and sugars everywhere, and much of that sugar is corn sweeteners.

Full disclosure: I eat a lot of wrong things, but am doing my level best to change that. I’m moving to a new place where I have some room to do some gardening. I may try my hand at actually growing some things.

I totally agree that food is over processed. Even the most simple things are filled with preservatives to extend shelf life.
Then we have a government that allows people on subsidies to purchase that over processed food and not fresh, less processed foods and make that a part of the daily diet.

A big debate in the atmosphere whether to leave the 304s alonne, or use PUA / game / hold frame. A well-to-do man can live his best life single.

Re: It’s the fact that the birthrates never recovered from the Great Recession.

I think that, as implied, key factors are economic. The Obama years had poor wage and GDP growth. It wasn’t until late in the Trump years that unemployment was driven to record lows for everyone and there was substantial wage growth. The Pandemic upset that apple cart. To have even a middle class life style in most of the country now requires that both parents work. Another economic factor is student loan debt, like starting out from college with a $100+K mortgage.
That is a consequence of the list price at many private schools being at the $70+K level, with public, in-state costs at $25+K.

Yet another, is women marrying later, which I would argue is for economic reasons – going to college is 4+ years taken away from their fertile years. Graduating from college at a much higher rate than men now do also makes it tougher to find a suitable match. (For years I have said that a major socio-economic problem was going to be unemployment of American men – not going to college and having much of the non-college employment taken over by either automation or immigrants.)

there will always be a demand for trades and skilled labor that don’t require a college degree. We will always need carpenters, hvac, plumbing and electrical workers, auto mechanics.

Yeah, I’m unconvinced. I’m still swoggled that 24-hour blackouts produce baby booms, but a ten-month quarantine-at-home results in depopulation of the species. Does unemployment or the spectre thereof really override the blandishments of the Little Head? Not in any population or historical period I ever investigated. Reducing the birthrate took clearcut raging famines in most cases, or diseases/wars that decimated one or both sexes. Not to mention that America boasts a growing, prolific class of the perpetually unemployed to begin with, people who would never give this a second thought.

You have to optimistic about the future to want to make the sacrifices to have children, especially a large family. A religious dedication also helps as it provides a purpose outside oneself. If you are self centered and pessimistic, well, why spend what time and resources you have on someone else? Many of the factors mentioned above contribute but I think it is an overall cultural malaise. Going to take a couple generations and a national renaissance to come out of it.

Are Millennials postponing marriage or foregoing marriage? I don’t know for certain, but I think it’s possible it’s the latter and not the former.

I did think it was interesting that despite declining birth rates and the COVID pandemic, births actually OUTPACED deaths in at least 11-states. Did that happen during the last (real) pandemic, when birth rates were significantly higher? I imagine not.

Guys are wising up, staying away from 304s.

Why are so many commentary videos recorded in motor vehicles?