They’ve been in D.C. since January after the Capitol Hill riots. 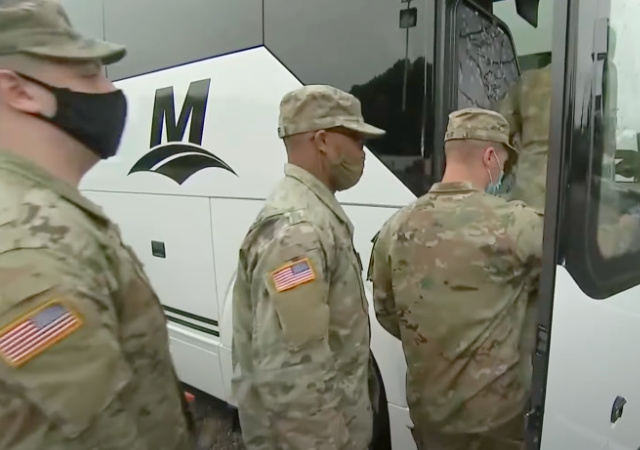 The National Guard who have been in Washington, D.C., since January 6th will leave this week.

The 2,149 National Guard troops will return home this week after there were no further requests from the Department of Defense (DoD) to extend the mission supporting the Capitol mission.

1) DefSec Austin: I want to take this opportunity to thank the Soldiers and Airmen of the National Guard who for the last five months have been standing watch over the Capitol grounds in Washington, D.C.

3) Austin: As these troops depart for home and a much-deserved reunion with loved ones, I hope they do so knowing how much the nation appreciates their service and sacrifice — and that of their families and employers. I hope they know how very proud we are of them.

The Pentagon deployed about 26,000 National Guard troops after the Capitol Hill riots, which cost $500 million.

The troops hit hardships upon their arrival:

The Guard’s deployment to the Capitol has been troubled. Early on, Guard members were briefly forced to take rest breaks and meals in a nearby cold garage, sparking outrage within the Biden administration. Officials quickly found new spaces within Congressional buildings for the on-duty breaks.

in [sic] addition, Guard members complained of bad food, including some who said they became sick.

They were supposed to leave by March 12, but Secretary of Defense Lloyd Austin extended a stay for 2,300 troops.

The National Guard’s presence was just theater, Penance should be a uniform for all those special people, with large bullseyes, front and back. and one on the cap 🙂 They can wear Kevlar under it. Media would love it.

All just for show, same as the original BS. Kevlar in summer would make them stink, same as their character.

1) I assume that the National Guard troops will be relieved at their posts by ANTIFA.

2) Just in passing, there are reports today that the Capitol building’s exterior doors are secured by electronic locks operated from a control center inside the building. They can only be unlocked from that center, on command OR by a fire alarm for evacuation purposes. There was no fire alarm, which mean that those who were inside had to be let in by someone’s command.

Hmm…bet it’s impossible for that fool proof system to be hacked.

You hit the nail on the head: “defund the police” is about REPLACING the police with Brownshirts.

The German Nazis knew the formula and put it into motion very successfully in the 1930s. The American Nazis (known as the democrat party) are trying it again.

Who’d ever thought we’d have brazenly vocal Jew-haters tolerated in Congress (Tlaib, Omar, Cortez, etc.)? Why are they not being ‘canceled’?

They really are hideous people, in every way, truly awful.

There’s a tour of duty that anyone should be ashamed of.

It really is embarrassing. It’ll probably be the first campaign ribbon ever thrown in the garbage by every soldier deployed on it.

They didn’t have a choice. It was the Governors who should have demanded their return earlier.

Remember how much the Dems howled when Trump sent the National Guard into Portland for a week to keep Antifa from burning down the Federal courthouse? They said it was dictatorial.

But when the Dems sent the NG into DC for 20 times as long, that was just fine for a free country.

So does this mean The Insurrection is over?

First 9/11 and now this. We really dodged a bullet. It took only four months to save our ‘Sacred Democracy’ this time. Imagine… It could have been worse than 9/11 if Comrades Biden and Pelosi had not acted so quickly and so decisively.

Too bad a lot of misguided angry flag waving grandpas and grandmas will have to do some hard time.

No, it means that now we’re free to plan the next insurrection.
(Ducking.)

It’ll be a celebratory march when Pelosi finally deops dead.

March? I’m throwin’ a celebratory BBQ for everybody in town. (Population 210.) And I guarantee you if they don’t come, it won’t be for political reasons.

So they finally are getting out of that parking garage. I hope they learned to hate democrats while there. It is what could be classed as a mugging by a liberal.

They don’t hate Democrats. A good number of them are from Michigan. They have voluntarily been sucking shit out of Gretchen Witless’ ass.

Michigan National Guard. A bunch of weekend whiners who sold out their country.

Your profanity will get you deleted. Try to avoid it.

I am so sorry that you are extremely sensitive. Grow a pair.

I agree with Fine. Can you not express yourself without resorting to gutter language?

I don’t give a flying fuck who you agree with.

I don’t kiss the ass of sensitive whiners.

How much you want to bet the administration shorts them on deployment pay?

I don’t understand this story at all. I read it three times. It didn’t mention trans National Guards(people) at all.

Pelosi, Schumer, Schiff and the rest of the America Haters found out that there is a price for stealing a national election. If you are stupid enough to believe that a fossilized, totally corrupt, sexual deviant, pathological liar with a 47 year history of accomplishing absolutely nothing of significance in Washington and who has early stage dementia actually got more votes than any president in history….then you are an incredibly naive fool.

Bet they were bored to tears waiting for the next “insurrection.”

Four months of serving as powerless stage props for the vile Dhimmi-crats’ theatrical and contrived vilification of conservative Americans.

Too bad the Dhimmi-crats didn’t feel like calling out the Guard when the Dhimmi-crats’ goose-stepping, jackbooted thug-supporters in the Party’s paramilitary arms of “Anti-fa” and “Black Lives Matter” were murdering innocents, destroying neighborhoods and businesses in scores of cities, desecrating synagogues and generally engaged in insurrectionist/terrorist behavior, throughout most of the year 2020.