What a spineless coward. 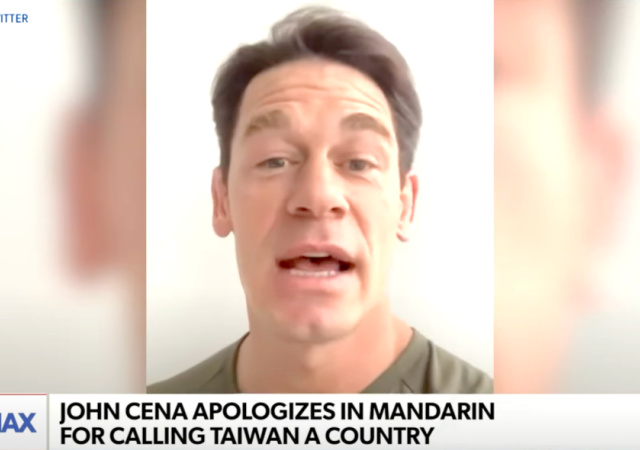 Former WWE wrestler and F9 star John Cena caved to China with his apology for calling Taiwan a country.

Beijing considers Taiwan, a self-ruled democratic island, to be a breakaway province and claims it as part of China. Referring to it as a country is often an offensive assertion in China, where matters of sovereignty and territory are passionate issues driven by a strong sense of nationalism.

Mr. Cena apologized for a statement he made in an interview with the Taiwanese broadcaster TVBS. In it, he told the reporter in Mandarin, “Taiwan is the first country that can watch” the film.

“I made a mistake,” Mr. Cena said in his apology video. “Now I have to say one thing which is very, very, very important: I love and respect China and Chinese people.”

He continued: “I’m very sorry for my mistakes. Sorry. Sorry. I’m really sorry. You have to understand that I love and respect China and Chinese people.”

John Cena apologized in Chinese on Sina Weibo after calling Taiwan a country during an interview promoting Fast & Furious 9 pic.twitter.com/dzRKIYgEzL

A Profile in Putty,

The differences between Winnie and Xi Winnie lookalike are staggering, it is telling that Xi objects to the lookalike, clearly he is suffering from Little Person Syndrome.

Winnie the Pooh kicked his arse.

So much for all those big muscles and all that bravado. They mean nothing in the real world.

This is a prime example of “spineless.”

Just look what ‘roids do to character.

Taiwan is a country. Hey, I’m tougher than John Cena.

If we don’t boycott him and his franchise into ruin in the US, we’re done for.

A predictable, career-saving, wealth-generating move. Besides, he grew up in blue Massachusetts.

Well I’m done with him. That was easy.

Easier for me. I have no idea who he is.

I wish the Republic of China the best of luck in destroying the Maoist rebels occupying the mainland portion of their country.

I don’t think it will happen in quite that way. But sooner or later, one way or another, the communists will fall and China will become a free country; and when it does the people in Taiwan can rejoin it.

Why do I care what an athlete thinks?

Chicken or egg problem, are jocks naturally dumb, or does that happen on blow at a time.

I imagine he’s protecting a substantial source of income.

“[It] could still be attributed to the inevitable immorality of politics – haven’t all states been responsible for wars? Consequently, all forms of compromise and servility, self-serving contacts and suspect friendship, unworthy statements and acts, and the pure opportunism of the citizens of totalitarian states could still, if necessary, be ascribed to a lamentable self-interest – cowardice or caution – and as human weaknesses appeal to some indulgence on our part.” (Levinas)

This “heroic” star of the “Fast and Furious” series just took a knee to the Chinese Communist genocidal dictators. Are we ever again going to see this spineless, sniveling boot-lick as an action hero? How can we ever look at his on-screen exploits without remembering he is, in reality, a groveling lick-spittle?

A guy from a fake sport and a movie I wouldn’t have seen on a bet, turns out to be a wimp.

And that movie being Fast and Furious 9 for shit’s sake. I’m guessing the only people that might want to see that are the citizens of China. Nobody else in their right minds would go near such an abomination.

Just who will believe his character in F9 after this wimpy act.

What about your country?

The legal hairs can just as easily be split the other way that it is in fact an independent country….with 18 or 19 countries (with some balls) recognizing it as such…more countries did previously but they also pulled a ‘Cena’ to keep suckling on their glorious China cash…and Taiwan has independently been a part of several international treaties and does have its own visa system seperate from China …

According to Taiwan it isn’t a country. It joined those treaties not as Taiwan but as China.

Taiwan considers itself to be the rightful governing body for te country of China. So, yes, it sees itself as a country. Taiwan is its interim position until it can once again rule all of China. It sees the CCP as an occupying force.

Put it this way. When all of Gaul was occupied by the Romans except for one small indomitable village with a druid and his magic potion, and two heroes and their dog, would you say the village was a country? No, it was part of Gaul, the only part that remained free. Taiwan is that village.

The reason he puts it that way is because he’s personally for independence, but he can’t say so openly because most of his citizens are strongly against it. So this is his way of finessing it.

Correct… The Republic of China is in exile on the island. Hong Kong is the excellent example of how Mainland China… Communist-controlled China views “China” and also the world. What Lenin dreamed of , China is doing… a better and cheaper rope.

Cena knows he could easily be replaced with Eric Holder.

So pathetic and shameful. The vile, dumb-as-rocks, hypocrite-fool, that basketball dunce, LeBron James, has new competition in the race to anoint the U.S.’s most transparently stupid and feckless “celebrity.”

Never ascribe to malice that easily explained by stupidity. Cena is the poster child for that statement.