Prime Minister Netanyahu: “Whatever we don’t do now, we will have to do in six months or a year.” 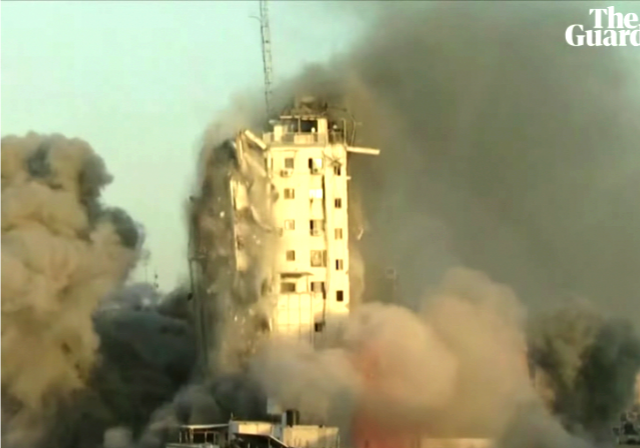 As Gaza-based Palestinian terrorist groups intensify their rocket offensive against Israeli towns and cities, Jerusalem is stepping up surgical strikes to eliminate the terrorist command structure and missile launch sites.

Using Islamist Hamas-controlled Gaza as their bases, terrorists fired more than 1500 rockets into Israel since Monday. As a result, the Israeli death toll on Thursday rose to seven, including an IDF soldier.

Israel has every right to protect its citizens from Hamas terrorism. pic.twitter.com/wuQtOj1kFP

Hamas, for the first time, introduced a suicide drone to its terror arsenal against Israel.

The IDF downed the drone as it flew from Gaza into Israel. “The military says the drone was closely monitored from the moment it crossed the border until it was downed,” the Times of Israel reported.

The Israeli government has no intention of halting anti-terrorism strikes amid foreign diplomatic pressure, local news reports indicated. Instead, the Israeli prime minister reportedly told his cabinet colleagues that “whatever we don’t do now, we will have to do in six months or a year.”

“The campaign is still far from over,” a cabinet member said. “Whatever we don’t do now, we will have to do in six months or a year from now.”

The members of the cabinet were also asked to approve operational plans for the coming days.

“This it will not end in the next few days,” said a cabinet member.

“Israel will not stop and has no interest in stopping. It is all moving in the right direction. We will act until they admit that opening fire was a mistake, just as Hezbollah leader Hassan Nasrallah did after the Second Lebanon War in 2006,” he said.

“When we have hit all our targets and the other side has still not surrendered, we will launch a ground operation even though we do not seek it.”

Senior officials also said that the IDF had not been taken by surprise by Hamas’ capabilities in the round of fighting.

“We were not surprised, neither by the scale of the rockets nor by their capabilities,” one said.

The one that appears to be caught napping is President Joe Biden’s administration. The “worst flare-up in violence between them in years (…) appeared to catch the Biden administration off guard as it pursued other priorities,” the Reuters noted on Thursday.

The Biden administration placed the onus of responsibility on Israel to stop Hamas from firing rockets in Gaza residential neighborhoods. According to U.S. Secretary of State Antony Blinken, “Israel has an extra burden in trying to do everything they possibly can to avoid civilian casualties.” Both Biden and Blinken supported Israel’s right to defend itself.

The Biden White House is “sending a senior U.S. diplomat to the Middle East to press Israeli and Palestinians officials both to de-escalate the tensions and violence that now verge on war,” the Associated Press reported.

Hamas has shot ~1200 rockets indiscriminately into civilian populations, Israel launched ~600 targeted air strikes. The “proportionate” argument either means you want more Israeli strikes on Gaza that are less precise, or you think not enough Israelis are dying. https://t.co/GqJwCHH4kZ

The IDF is carrying out operations to decapitate terrorist organizations in Gaza — particularly Hamas and the Palestinian Islamic Jihad (PIJ).

“Israel said it killed 16 members of the Hamas armed wing in Gaza in a barrage on Wednesday,” Reuters reported.

The Israeli army “conducted a joint military operation with the Shin Bet (Israel Security Agency) that killed a number of senior Hamas commanders. The IDF said that a total of 650 terror targets in Gaza had been hit so far with attacks continuing into Thursday,” the Israeli TV channel i24News reported Thursday.

BREAKING: IDF takes out a Hamas anti-tank missile launcher in a civilian multi-storey building in the southern Gaza Strip. 💥 pic.twitter.com/DpHkoIun25

On Thursday afternoon, Abu Ubaida, spokesman of Hamas’s military wing the Izzadin al-Qassam Brigades, claimed that Hamas has launched “massive rocket strikes” larger than any launched on Israel since the 1948 War for Independence.

“The decision to bomb Tel Aviv, Jerusalem, Dimona, Ashkelon, Ashdod, Beersheba and closer and further than it, is easier for us than drinking water,” added Abu-Ubaida.

The Al-Qassam spokesperson dared Israel to “mobilize whatever forces you want from land, sea and air,” warning that the terrorist group has “prepared for you varieties of death.”

“What distinguishes this battle is the solidarity of our people in all arenas and their unanimity on the option of resistance,” said the Al-Qassam spokesperson adding in a statement addressed to Arab-Israelis and Palestinians in the West Bank that “Our weapons are your weapons, our blood is your blood, and our fate is yours.”

Turkish President Recep Tayyip Erdogan tried to rally Muslim countries against Israel. The world must “give Israel a strong and deterrent lesson,” Erdogan told Vladimir Putin during a phone call.

The 57-member Organization of Islamic Cooperation (OIC) and the 22-member Arab League have already condemned Israel’s counter-terrorism operations against Hamas.

The IDF on Thursday evening destroyed the main Hamas rocket factory. “The IDF says it has bombed a central Hamas rocket production site and a Hamas navy military post in the central Gaza Strip,” The Times of Israel reported.

“In addition, a number of other weapons production sites have been struck throughout the day, the military says,” the daily added.

If Iran was smart they would learn a lesson from this.

And they will. Unfortunately, the lesson they learn will be that half-measures don’t work. It’s going to take nukes.

Which is a good reason to nuke Iran first.

I heard an astonishing story on NPR this morning in which an Israeli woman lamented “the occupation”, presumably the reason behind Hamas’ latest rocket barrage.

Israel, follow the advice of Nelson Muntz, “Finish the job.”

Do. Not. Stop. As you’ve done in the past. This time, plow your way through the Gaza Strip, from your border to the sea. Act in your self-interest and rid yourself of these Muslim pests and murderers. And along the way tell the John Kerrys of the world to GF themselves.

Israel keeps pulling out of the West Bank and Gaza, they have their own governments. They keep carrying out terrorism. The only real “occupied territory” is disputed land claimed by both sides.

They will march as many children as possible into harms way to make the IDF look like the bad guy.

Hamas is using future martyrs, what is the problem?

The concept of a “proportionate” response is based on assumptions about legitimate grievance and the basically civilized nature of the parties involved.

In other words, it’s insane. Treat it as such.

Israel really has to do a lot more than that. Israel has to establish a clear buffer zone into Gaza that is wide enough to provide actual security. That land must be cleared and the palis made to understand that they are NEVER getting an inch of it. NEVER. That is what Israel has to do, at the very least.

And Israel also has to start thinking long and hard about Israeli arabs who have made themselves hamas allies from within – including the entirety of the arab political leadership (as if there was any question about any of this, anyway).

Seems to be a shortage of stories about hamas tunnels being used to smuggle their thugs into Israel lately. I really doubt all the tunnels have been found, so does this mean they’re saving them for later, or are tunnel-attacks only really useful when Israel is not on alert due to rocket bombardment? I suspect the latter, in which case it might be a good time to fuel-air collapse the known ones as a discouragement.