Palestinian terrorists fire 650 rockets on Israel in past 24 hours. 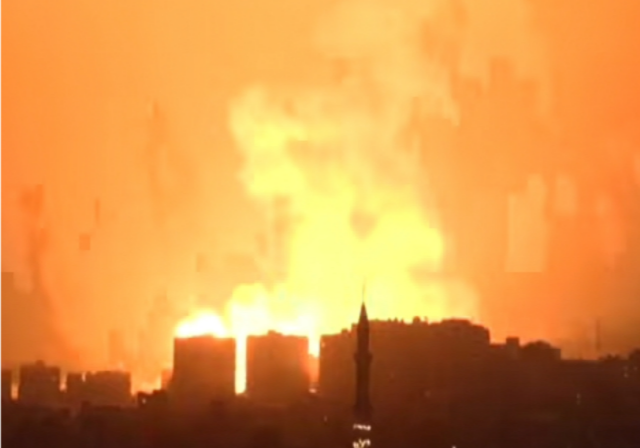 An Israeli airstrike eliminated the rocket chief of the Gaza-based Palestinian Islamic Jihad (PIJ) along with other top members of the outfit.

The Israeli counterstrike comes as Palestinian terrorist groups intensify their rocket offensive on cities and towns in central and southern Israel, including Jerusalem. More than 650 missiles were fired at Israel in the past 24 hours, killing at least two civilians, causing damage, and disrupting normal life.

“An elderly woman and her caregiver killed by rockets launched by Palestinian terrorists” in Ashkelon, Israeli TV channel i24News reported.

Among the rocket targets were residential areas, including a direct hit at an evacuated high school in the southern Israeli city of Ashkelon.

The Israel military operation, which targeted top leadership of the Palestinian Islamic Jihad, killed the Islamist group’s rocket chief Samih al-Mamluk along with at least two other leading terrorist operatives, Israeli media reports say. “Israel targeted the high-rise building in the upscale al-Rimal neighborhood of the city,” the Times of Israel reported.

Several senior members of Palestinian Islamic Jihad's Saraya al-Quds have been killed in a targeted assassiantion by the IDF in the last several hours. #Gaza #Israel pic.twitter.com/z1cQSp6QsB

The IDF and Shin Bet domestic security agency announced on Tuesday that a senior commander of the Palestinian Islamic Jihad (PIJ) terrorist group in the Gaza Strip has been assassinated in a joint operation.

The military identified the militant as the head of the PIJ’s rocket unit Samih al-Mamluk. Other senior militants in the organization were also killed in the same strike, including Mohamad Abu al-Atta — brother of the military commander of the PIJ’s Northern Brigade in Gaza Bahaa Abu al-Atta who was assassinated by Israel in late 2019 — and Kamal Karika.

PIJ confirmed the three killed in an airstrike on a hideout apartment in Gaza City were senior members of its armed wing and vowed retaliation.

The last 24 hours in Israel: pic.twitter.com/XzajmMGxhW

As Palestinian rioters mark the Muslim holy month of Ramadan by violence on the Temple Mount and across Jerusalem, Hamas and other terrorist groups are using Gaza to launch rocket attacks against Israeli civilians.

These are the three Palestinian Islamic Jihad terrorists killed in an Israeli airstrike in Gaza a short time ago.

This image was circulated by the terrorist group itself.

(Note: not children, not civilians) pic.twitter.com/QXYgWN0dU7

The Israeli government has made the decision “to further intensify the severity and pace of the attacks,” the Israeli prime minister said. “Hamas will receive blows here that it did not expect.”

#IsraelUnderFire from intense rocket bombardment from #Gaza. Over 650 rockets now in 24 hours. That’s about one 🚀 every 2.5 minutes!

RT to show you stand in solidarity with #Israel! 🇮🇱🇮🇱🇮🇱 pic.twitter.com/qE4fsw0iHP

Several Arab and Muslim countries are ganging up to condemn Israel as Palestinians unleash a wave of terror and rioting against the country.

Meanwhile, the Palestinian terror campaign shows no sign of letting up. “Defiant Hamas and Palestinian Islamic Jihad officials on Tuesday threatened to step up their attacks on Israel,” the Jerusalem Post reported.

It seems that hamas should visit Chicago for shooting/aiming lessons. In Chicago, the thugs have a 10/1 wounding/kill ratio. Hamas has fired 650 ROCKETS and has only killed 2 Israelis (so far). I’ll let you do the math.

The glaring differences? The Israelis know how to defend themselves. In Chicago, the police act as cleaners/janitors and won’t defend anybody. In Gaza, hamas uses women and children as human shields. The Israelis target military sites. Hamas targets civilian areas.

At some point, the Israelis may be forced to seal off the gaza borders (land and sea), go house to house, room by room and clean out the hamas stockpiles, eliminating anyone who opposes them. I doubt this will happen.

Another thing that should (but won’t) happen is the deportation of every muslim who riots or attacks Israel/Israelis straight to gaza.

The difference is that in Chicago they’re firing directly at targets they can see, so of course they frequently hit someone. The Arabs are firing blindly at an entire country. Even a tiny country like Israel has a lot more space where people aren’t than where they are. And when the siren goes off most people manage to get to shelter. So it’s not that surprising that so few people are actually hit. Rockets that don’t hit anyone still do much economic damage and emotional harm.

Gee whiz, milhouse, it must be a slow news day for you. /s/ It took you almost 4 1/2 hours to “new york ‘splain” my own sarcasm. /s/ Btw, apparently the fact/opinion you claim re the chicago thugs “frequently” hitting their targets does not ‘splain the TODDLERS killed in their beds…inside their homes. /s/ I guess the thugs have x-ray vision? /s/ Also, btw, a wound/kill ratio of 10/1 is terrible. (It would be nice if the blue-city thugs actually knew how to shoot. There would be a lot fewer of them.) /not sarcasm/ Spend a little time on the range, my friend. /s/ If I could only take down varmints on my farm once in ten tries with my antique 22, I wouldn’t go around bragging about my marksmanship. /not sarcasm/ Wasting ammo isn’t my thing. /not sarcasm/

And yeah, it took me hours to reply to your comment. I wasn’t sure if it was worth my time attempting to chat about any aspect of weaponry with someone from nu yawk city. /s/ I’m still not sure. /not sarcasm/ Just one more thing….all the /s/’s are another form of….you may have guessed it, this time, milhouse….sarcasm.

It’s not mentioned in the article but I believe the rockets were provided by Iran, with whom Joe Biden wants to resume a deeply flawed nuclear deal.

PS – if the treaty was so marvelous, why didn’t Obama submit it to the Senate for ratification? (Rhetorical question, obviously)

The Big Guy has to get paid.

Those rockets have a one time only lifespan. Someone has to be supplying replacements. This is getting interesting, doc!

Yup. 650 rockets are a lot of rockets for an impoverished people to have on hand at their own expense.

Why are we sending them foreign aid so they can use the money to buy rockets?

Note all the foreign aid that European nations give to Palestinian terrorist organizations.

Foreign aid from the EU and US are funding this.

There’s an “upscale neighborhood” in Gaza? I thought they were all po’ folks, kept down by Zionist terror. Naturally the terrorists brave freedom fighters are ensconced in luxury while the masses live in poverty. This is what happens when aid money is spent on rockets and cement for tunnels.

You should see some of the “Palestinian refugee camps”. Not all of them, but there are some quite swanky ones, with houses I wish I could afford.

This has Obama, Jarrett written all over it

Even with out the writing, you can smell it. Smells like Obama and Jarratt alrighty.

Play with fire, you’ll get burned

Two lessons to be learned from this:
1. The Jihadists are playing stupid games.
2. The Israelis are not playing.

Last time the rocket chief was aborted, there was peace in the Middle East. NOW (pun intended), there is a military junta in DC, witch hunts and warlock trials across the nation, and domestic and foreign imperatives to conduct transnational terrorism, wars without borders, in the spirit of social justice.

in a way similar to what allied forces in the pacific had to face as they fought toward the home islands of japan–the japanese were not going to surrender–while our soldiers had tremendous respect for the courage and ability of the japanese, their ideology made them a particularly tenacious and dangerous opponent

Yes. They are the True Believers.
Hardwired and unredeemable.

You cannot reform them. You have to destroy them.

You cannot make peace with people who hate you. Appeasement never works.

This is the reality that too many Jews deny.

I expect the Israelis are smart enough not to share any intel with the Biden administration. Anything that might be useful to the terrorists would go right straight to AOC and Tlaib, who would be on the phone with their buddies in Hamas.

Muslims have been oppressing and murdering Jews ever since the Arab conquest of the Holy Land. In that sense this is nothing new and the biggest difference is that the Koran waving savages now tell Westerners that they kill because they are “oppressed”. Shame on Westerners for believing the barbarians.

Hamas (backed by Iran) has concluded that Comrade Biden is weak and will not back Israel.

Israel is on its own.

Looks like the time for a reckoning between Iran and Israel has come. Get ready for the biggest war in the area in 50 years. Instigated by Iran.

Guess what will happen to oil prices.

And now the Israeli military needs to keep up the pressure on the Hamas terrorists until they decide that the price they are paying isn’t worth the effort in their attempts to destroy Israel or they are completely obliterated from the region. Either way, Hamas has to be dealt with and dealt with now.

If Israel can kill an Palestinian Islamic Jihad’s rocket chief with such precision, it appears that there are Arabs willing to provide Israel with useful information. How many innocent Arabs will PIJ kill in an attempt to find out who was giving that information to the Israelis?

Which reminds me (IIRC) of the Oriana Fallaci interview with Yasir Arafat where she got him to admit that Arabs had killed more Palestinians than the Israelis had.

How’s that “Land for Peace” deal working out?

Since there was never any “peace”, when do they get the land back?

Regarding the current Admin’s attempt at “re-juvenating” the Iran deal, it seems that maybe since the the 20th Century had its Haulocaust, this current crowd want the 21st Century to have one also.

Will there be an investigation of where the rockets came from and how they got there?

[Not holding my breath.]

Take off the gloves