Also Raja: “The only reason I am supporting Germany in the finals – Hitler was a German and he did good with those Jews!” 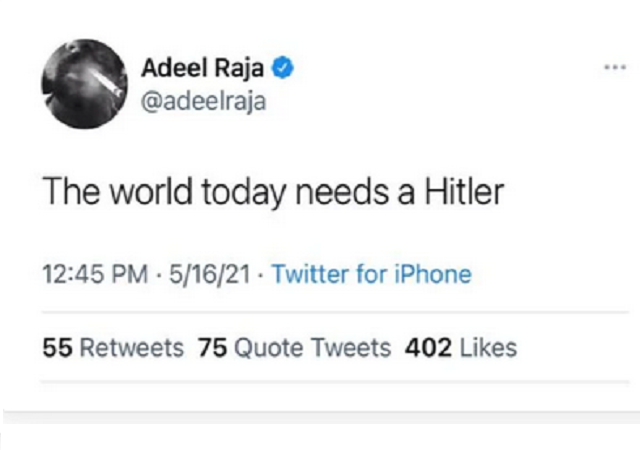 Amid the ongoing onslaught of Israel by Iran-backed terror group Hamas, CNN contributor Adeel Raja wrote: “The world today needs a Hitler.”  Though this tweet has since been deleted, it’s not the first time Raja has praised Hitler and expressed his virulent antisemitism.

A journalist and verified Twitter user on Sunday said that “the world today needs a Hitler” in a since-deleted social media post as tensions continue to boil between Israel and Hamas.

Adeel Raja, who lists himself as a “Freelance Contributor at CNN” on his LinkedIn profile, appears to have published several articles for CNN’s webpage, a review by the Washington Examiner found. According to the LinkedIn profile, Raja has held the position from August 2013 until the present day. His most recent byline for the outlet appears to have been from Sept. 16, 2020.

This guy is an actual CNN contributor. No joke. https://t.co/UZAEPzijWx pic.twitter.com/b4U7S4HV4Z

54 stories under his name pic.twitter.com/Vn2frvOEo4

He has been on CNN’s payroll since August of 2013 pic.twitter.com/o6O2PGhiCk

This guy has 54 articles under his byline at CNN. They should probably fire whoever does their background checks. pic.twitter.com/yNr7iT29nD

CNN is reportedly “looking into it,” the Washington Examiner continues.

Matt Dornic, a spokesman for CNN, told the Washington Examiner that he “never heard of him” and that he’s “looking into it” when asked about Raja.

Raja, who appears to be an ally of Palestine during the Israel-Hamas conflict in Gaza, has shared several opinions on the matter via Twitter in recent days. On Saturday, he tweeted, “What the Jews are doing in Palestine is similar to what Indian Hindus are doing in Occupied Kashmir. Same tactics.”

A few days prior, the journalist responded to a tweet from former Vice President Mike Pence that read “America Stands with Israel,” saying, “A history of creating terrorists and standing with them!”

Here’s a screenshot of another of Raja’s vile vomitous pro-Hitler antisemitic hate. 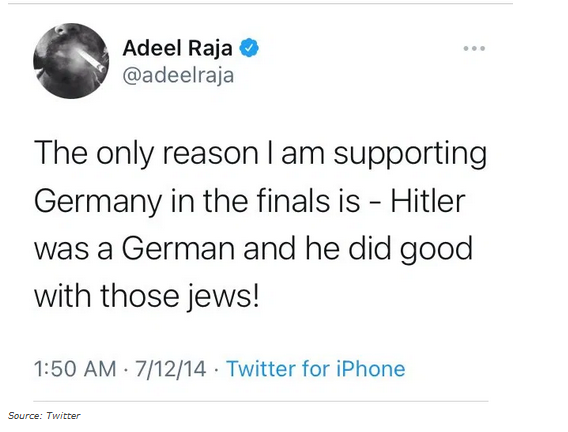 The backlash has been swift on social media.

Social media users are demanding CNN respond after discovering that one of their freelance contributors, Adeel Raja, who has written dozens of pieces for the outlet, wrote in a now-deleted tweet that “the world today needs a Hitler.” After some digging, it turned out to be one of several messages Raja has posted praising the Nazi leader.

“The only reason I am supporting Germany in the finals – Hitler was a German and he did good with those Jews!” Raja wrote during the 2014 FIFA World Cup. Raja last had a CNN byline on Sept. 16, 2020. He still lists his affiliation with the network on LinkedIn.

CNN contributor Tweets the world needs a new Hitler. Previously said he was rooting for German soccer because of how Hitler treated the Jews. Left wing anti-semitism is awfully mainstream now: https://t.co/0RhRDV5ank

In the past 24hrs we’ve found out a longtime CNN contributor is a Hitler sycophant, and that the AP and Al Jazeera have been sharing an office with Hamas. Great look for the mainstream media.

This supports what I was saying on another thread that today large numbers of people claiming to be journalists are as bad or worse that PR hacks. This is why I pretty much ignore traditional media, Today they put out rubbish.

Just need an Israeli security guard to meet up with the scum.
Guard knows what to do and executes the maneuver perfectly.

I’ll be floored if this doesn’t get him fired from any future assignments.

He won’t have any trouble finding work. Rashida Tlaib will probably offer him a job if no one else will.

Hmmm @jack has some algorithm issues to work through. Maybe since DJT isn’t blowing up the tweets the nice folks over there could devote some of their time and energy into flagging, banning and exposing these sorts of assclowns?

Correct me if I’m wrong but I think the article had a response from CNN implying they are just going to fire him now that he is embarrassing them by being exposed (The line being “Matt Dornic, a spokesman for CNN, told the Washington Examiner that he “never heard of him” and that he’s “looking into it” when asked about Raja.” in other words “we don’t stand by him (looking into it) and he was a horrible employee (“never heard of him”)”.

The problem involving leftwing anti-Semitism is what if the man in question was smart enough not to endorse Adolph Hitler? Those are the effective anti-Semites we should beware of.

This one was mercifully stupid but again what if he wasn’t that thick?

He’s a free-lancer, so it’s entirely possible that the CNN spokesperson really had never heard of him. It’s a big organization, after all, with thousands of contributors all over the world. “Looking into it” means that they aren’t ready to commit to a response, not that they are going to fire him. The hope, probably, is that this will blow over while CNN “looks into it” and they can then keep him once people move on (like tomorrow). /just my two cents, that and $6 will buy you a gallon of gas next year.

It is a good take on it and I could be wrong, I just don’t see how CNN would be dumb enough to keep a man who is well there is no other word for it radioactive, so may have overanalyzed the comment for something that isn’t there.

He’s a freelancer. If they take any more material from him, they’ll tell him to create a pseudonym.

With all due respect, Fuzzy, you’re letting them off far too lightly. CNN has been a disgraceful organization for years and years. It is owned by AT&T, whose Chairman and CEO praised its work in the company’s last annual report to shareholders. The problem starts at the top.

Don’t kid yourself, Raja is a malicious antiSemite and CNN could have figured it out in a heartbeat if they really wanted to know. I don’t know if CNN is anti-Semitic, but it is definitely anti-Israel and has a long, well established history of being an intellectually lazy organization fronted by cheap, slick talkers, dressed up in expensive clothes and horn rimmed glasses. CNN is an AT&T darling, what it does. Don’t you buy it.

Did you read my post? Or even the comment to which you are responding? Of course CNN is a toxic cesspool of woke commie lunacy. We ALL know that, and I don’t see how I didn’t cover that Raja is a disgusting, vile antisemite. I’m pretty sure I was clear on that point.

“just my two cents, that and $6 will buy you a gallon of gas next year.”

You sure are an optimist.

Careful of wishing for a Hitler: you just might unleash a Hitler who has you killed first.

Hmm, interesting point given Hitler’s obsession with blue-eyed blonde Aryans (despite his own appearance). Not sure how long this Raja guy would last if there were a Hitler today. Hitler wasn’t too fond of Middle Easterners, either.

“Hitler’s obsession with blue-eyed blonde Aryans (despite his own appearance).”

Word up to all the white Democrat antiques obsessed with elevating the blacks.

Hitler was in deep with the Arabs and many of them fought for Germany during WWII. See link below…I’m not sure why this doesn’t get exposed more often, but I kinda know (because of the academic world that is covering for the Muslims). Remember that this hateful little escapade all came BEFORE the nation declaration of Israel in 1948.

The Arab world conspired to obliterate Israel before it’s sovereign nationhood was official. These filth are vile and deeply bitter people who don’t think anyone else has a right to exist in the Middle East unless they are affiliated with Islam. You can bet if the shoe were on the other foot with Palestine, Israel would have already been gassed and slaughtered by the savages of the desert.

‘Hitler’ used metaphorically. A Stalin would be worse: other than Jews, gypsies and homosexuals, at least Hitler didn’t kill his own citizens. Stalin killed 6 million Ukranians alone – as a appetizer for his genocide of what is suspected to be (The NY Times would argue otherwise) 50 to 100 million Russian.

“Hitler didn’t kill his own citizens.”

I do not deny or detract regarding your point about Stalin, but both Stalin and Hitler were threats to both their citizens and the rest of the people on the planet. I value the lives of Jewish, homosexual and gypsy citizens as much as any other citizen. You want neither fascists nor Marxists in charge of anything. Both are creations socialism and the left. Both are evil. Both belong in the proverbial dust bin of history. I will not settle for one over the other.

Fact is stranger than fiction.

But with CNN – nothing surprises me anymore.

Fact is always stranger than fiction when you live through bad historical times. Just ask any concentration camp or gulag survivor.

Antifa seems to want to see the Jews wiped out too. How fascist of them.

Funny how those who are so quick to virtue signal anti-fascism take actions that are actually the most fascist.

Or it’s the kind of old age that wisdom used to pair up with before it gave up and moved out into the woods and posted “Trespassers will be shot” signs all around its property.

No shortage. They have moved on to having 120-million bad men — all white and male.

I think the “freelancer” holds views that are quite esteemed there.

I did read both what you ‘wrote’ in the column and the in the post to which I responded. Nowhere in either did you strike out at CNN as harshly and forcefully as you you did when you lashed out at me. There’s not much Fuzzy in the column, it’s almost entirely Twitter screenshots or long quotes from the Washington Examiner and Fox News; remove them and there’s virtually nothing left.

My “you’re letting them off too lightly” was a response to your apologetic “…it’s entirely possible that the CNN spokesperson really had never heard of him. It’s a big organization, after all, with thousands of contributors all over the world. “ Agree, it is entirely possible. It is also possible that no one at CNN ever tried to find out as, obviously from the posts, numerous others did with no trouble at all, or equally possible (probable?) the disgraceful possibility that they at CNN knew about Raja and just didn’t care, and worse, agreed with him.

My addition to the whole discussion was to be that CNN’s behavior is sponsored, approved of, enabled, and allowed to be sold by its patron, AT&T and its board. These relationships, and others like Comcast’s with NBC/MSNBC and Disney’s with ABC need much, much more visibility in discussions in places like Legal Insurrection. Much more.

Ah, I see, and agree. Thanks, Owego, for the clarification and explication. I can be slow sometimes. 😛