Inflation Spikes as Consumer Prices Soar by 4.2% in April

Inflation Spikes as Consumer Prices Soar by 4.2% in April

Hopefully, more people go back to work because history tells us prices will not go down. 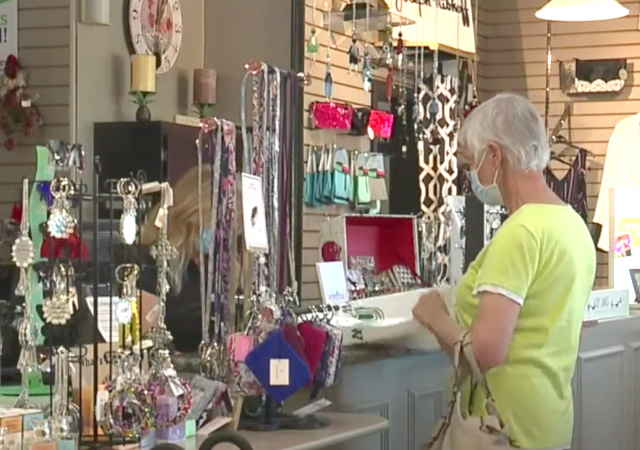 The Consumer Price Index (CPI) climbed in April by 4.2% as the economy begins to open up, causing a demand for supply. It’s the biggest 12-month increase since 2008.

The CPI “measures a basket of goods as well as energy and housing costs.” In other words, it encompasses everything. All goods.

The Labor Department reported its consumer-price index jumped 4.2% in April from a year earlier, up from 2.6% for the year ended in March. Consumer prices increased a seasonally adjusted 0.8% in April from March. The index measures what consumers pay for goods and services, including clothes, groceries, restaurant meals, recreational activities and vehicles.

Higher prices for used autos surged 10% in April compared with the prior month—the largest monthly increase on record. That accounted for more than a third of the increase, the Labor Department said.

The core price index, which does not include food and energy, climbed 3% compared to a year ago. Other stats:

Prices were going to change from a year ago because of the pandemic. Prices only rose 2.2% from April two years ago.

I asked my financial friend if this instance of inflation is a good thing. He said no. He said part of it is the rebounding economy, but if a considerable portion of the economy is sitting at home and collecting unemployment it will backfire.

He offered me this example: A ten-year U.S. treasury bond yields about 1.7% as of Wednesday morning. If inflation is growing 4.8% you’re already in the hole with your money. In other words, the bond is paying you negative 3% after inflation.

It doesn’t help that the Fed wants to keep rates near zero. It prefers to keep those rates until its “preferred inflation measure is averaging 2$ and full employment has been achieved.”

Full employment? Okay, I understand that. But did you see the April jobs report? No one is going back to work despite all the job openings. Everyone is staying home and collecting unemployment.

Will prices go down? History says no:

“I think a lot of us are expecting a pretty significant increase of spending on services in the next couple months and that’s where a lot of the pressure on CPI is going to come from,” said Richard F. Moody, chief economist at Regions Financial Corp., referring to the consumer-price index.

The longer that burst of spending persists, the more latitude producers have to raise prices, he said. And once prices go up, they seldom fall back to where they were, even if the acceleration in overall inflation is temporary, he added. “That very much matters in terms of what’s the lasting impact on household budgets,” said Mr. Moody.

Then again 2020 was unique so maybe prices will fall a little.

The new numbers have not worried Federal Reserve policymakers and many economists. They consider this report as “transitory” and expect everything to settle down later this year.

Treasury Secretary Yellen – 2 months ago – paraphrase – USA can borrow all we want because we see no inflation on the horizon – cost of servicing the debt is really low. So Biden big-spending policies are not a problem.

Today, inflation JUMPS UP and makes Yellen look like a friggin idiot.

Woke impact on USA Treasury. Thinking thinking you can just print money forever. Where are the true economists – the ones who can actually do “racist math” like calculus. We need them back.

Keep in mind that BLS is constantly tinkering with the CPI calculation to suppress the CPI readings because the government desperately needs low rates to finance our now $29T (and growing) debt.

I read this morning that had the BLS not replaced home prices with home rents in the core CPI the year over year inflation would have been 8.4%!!

Even taking a blend of purchase prices and rents into consideration the headline CPI is running way ahead of the published number.

Will it be transient as Powell predicts (prays for) or are we headed for disastrous inflation?

They have been lieing about inflation for a long time, screwing us from both sides, low returns on investments and underestimated inflation on social security.

For the past six years or so, stores mitiated loss of profits on discressionaly items which were not selling by increasing prices of things which people had to have.

Cloward Piven in action!
We know Biden is ‘president’, but we know he’s mentally not present. The desperat Harris is just as great a tool.

Lloyd Austin is desrroying the military, and very quckly. (I got the word from lower level officers, who say it is so bad, they want early retirement.) The idea is for the new ‘BLM’ military to put boots on the ground in lyover country.

We’re a war, but too many of us don’t know it. The collapse is going to be as fast as it was in the USSR, and it’s going to be soon.

The overwhelemed Kamala Harris will be the first president to kill herself, or be the second to resign. Pelosi will become the first clinically insane president.

If you don’t see what’s happening NOW, you’re either sadly ignorant, or you are part of the plot:

How the Left Plans To Put Boots on the Ground to Subdue Middle America:

I just tried to open that article and it failed. So I went to the main American Thinker page, which worked just fine, but every single article fails to open, with a message like this:

I suppose it could just be a glitch, but these days, I’m not going to be putting any bets that way.

It’s not just you. Reported.

And all I get is a white blank page. Nothing on it.

Save yourselves. Prepare for bad days ahead.

This is the second time I’ve heard Cloward Piven mentioned this month.

The question isn’t what they are doing, that is obvious. The question at hands is what little people who KNOW are going to do about it.

You can get “deplatformed” for pointing out the massive voting fraud that took place last year. I wonder how long it will be before social media starts banning anyone who notes the economy is not doing too well under the Biden* administration…..

It’s going to get a lot worse than Zuckerberg inserting himself in our lives: our very lives will be in perill:

How the Left Plans To Put Boots on the Ground to Subdue Middle America:

It’s not “Joe’s” anything. He’s more like Weimar Germany’s befuddled Chancellor Paul Von Hindenberg. We know what comes next.

BLS has suppressed and changed the CPI indicators since the late 80’s. For
One reason only, social security increases are tied to the CPI. That was a budget disaster in the late 70’s, early 80’s. And it was the driving reason for the grand bargain to fund the “boomer” retirement. With boomers well into retirement it would be an utter disaster to allow inflation to hit 8% and up for 2-4 years. Yes 29T is unacceptable, but those increases in social security would have us at 50T in no time flat.

Speaking of privilege, it is estimated that the richest man who ever lived, a black Islamic imperial slaver, destroyed whole economies, presumably with good intentions, through redistributive change that drove progressive prices (i.e. inflation, mass distortion).

Yes, I heard about that guy. I believe his name was Barack something something.

Our town is out of gas, so we bought a few extra groceries to sit this out.

Buckle up, this will get a lot worse.

Here in SE CT, we’re seeing cat food shortages, egg shortages, and price increases. The five-dozen box at Walmart was $6 a few weeks ago, when I got one the last time (they don’t have them now) it was more like $7.50. The nice thick-cut bacon has gone up at least 50%, it was over $6 a pound at Walmart last week. I was paying about that for the entire 1.5 pound package not that long ago.

I think I’ll head out in a bit and see if I can find powdered milk for the pantry.

At least I did just get news from my local senator that they are getting ready to award the contracts to (finally) repair the I-95N span of the bridge over the Thames. It was supposed to be done years ago, when the bridge was rated in the worst condition of any bridge still considered safe to drive on in the state. I would really like to not have a repeat of I35W in Minneapolis or today’s I40 at Memphis. Especially with the river closing, since the US really doesn’t need half its Atlantic sub fleet stuck in port. Though the Jo and the Ho admin would probably see that as a Good Thing™

The inflation index is not based on reality.. like construction costs… $80 plywood sheet is HYPER-inflation.

People can see the prices going up in their lives. We don’t need the government agency to confirm it.

If trailing 12 months’ inflation is 6+% and gasoline pushing $4 a gallon in Summer 2022, even with fraudulent ballots, how do the Democrats not get wiped out by the Biden inflation tax?

This is just the beginning. There are lagging indicators that haven’t hit the broader drivers of inflation and CPI. Transportation costs are beginning to skyrocket. Leading the charge are fuel haulers. Corn prices are going through the roof which means that farmers will be switching back to corn from soy and other feed crops. Come fall, all food products will be up tens significantly. Labor shortages will continue until September thanks to Biden’s incentive plan to keep the sheep dependent on big gov. This is the short list. There are many, many more.

An article I read a few days ago pointed out that the CPI isn’t a measure of inflation – the money supply is. And by that measure, inflation has been running rampant ever since the Fed started printing trillions of excess money. The only reason it isn’t more apparent is that at the same time they’re also buying up government debt by the trillions, injecting huge amounts of money into the economy by allowing the government (yes, including Trump’s) to effectively spend without limit. The rise in the CPI is only an indicator that the supply of goods isn’t keeping up with the cash injection. (If it were doing so, prices wouldn’t rise much even though the money supply is being inflated and debased). I’m not an economist either, but I know his definition of inflation is correct, and the rest makes sense. It’s a big Ponzi scheme that isn’t going to end well for us or the rest of the world. World Wars have been started over just this sort of thing.