“The question for the Court is a narrow one: Does the Public Health Service Act grant the CDC the legal authority to impose a nationwide eviction moratorium? It does not.” 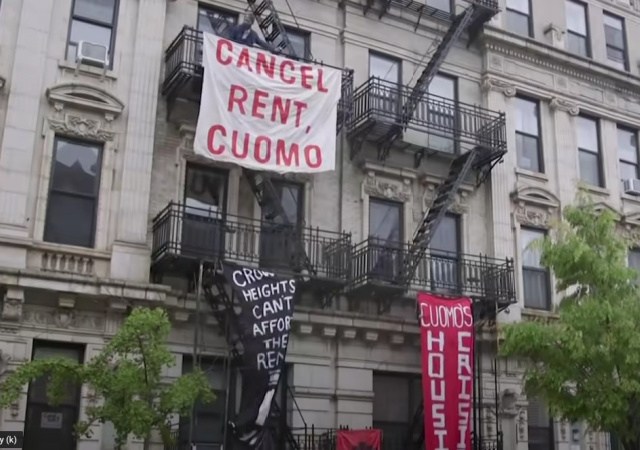 U.S. District Court Judge Dabney Friedrich threw out the Centers for Disease Control and Prevention’s (CDC) eviction moratorium. The CDC implemented the moratorium last year because of COVID-19 and extended it until June 2021.

The CDC used the moratorium as a way to contain COVID so cash-strapped people would have a chance to stay in their homes instead of moving around or end up in shelters. Officials applied the rules to public and private residences.

Let me try to summarize. The Public Health Service Act grants the Secretary of Human Health and Services “broad authority to make and enforce regulations necessary to prevent the spread of disease.” Friedrich noted it does make the power “limitless.”

Basically, the act limits it to the residence:

It states: “For purposes of carrying out and enforcing such regulation,” id (emphasis added), the Secretary “may provide for such inspection, fumigation, disinfection, sanitation, pest extermination [and] destruction of animals or articles found to be so infected or contaminated as to be sources of dangerous infection to human beings.” Id.

The HHS Secretary “may provide for ‘other measures, as in his judgment may be necessary.'” However, Friedrich went back to the act and found that the regulations “must be directed toward ‘specific targets “found” to be sources of infection.'”

The national eviction moratorium satisfies none of these textual limitations. Plainly, imposing a moratorium on evictions is different in nature than “inspect[ing], fumigat[ing], disinfect[ing], sanit[izing], . . . exterminat[ing] [or] destr[oying],” 42 U.S.C. § 264(a), a potential source of infection. See Tiger Lily, 992 F.3d at 524. Moreover, interpreting the term “articles” to include evictions would stretch the term beyond its plain meaning. See Webster’s New International Dictionary 156 (2d ed. 1945) (defining an “article” asm “[a] thing of a particular class or kind” or “a commodity”); see also Skyworks, 2021 WL 911720, at *10. And even if the meaning of the term “articles” could be stretched that far, the statute instructs that they must be “found to be so infected or contaminated as to be sources of dangerous infection to human beings.” 42 U.S.C. § 264(a). The Secretary has made no such findings here. The fact that individuals with COVID-19 can be asymptomatic and that the disease is difficult to detect, Mot. Hr’g Rough Tr. at 26, 3 does not broaden the Secretary’s authority beyond what the plain text of § 264(a) permits.

Friedrich said the department interpretation of the act does not give a limit to the secretary’s authority just as long as the secretary “can make a determination that a given measure is ‘necessary’ to combat the interstate or international spread of disease.”

Friedrich also pointed out that the CDC has never used the act “in this manner.” HHS even confirmed the department never used it “‘to implement a temporary eviction moratorium,’ and ‘has rarely [been]utilized…for disease-control purposes.”

“It is the role of the political branches, and not the courts, to assess the merits of policy measures designed to combat the spread of disease, even during a global pandemic,” Friedrich concluded. “The question for the Court is a narrow one: Does the Public Health Service Act grant the CDC the legal authority to impose a nationwide eviction moratorium? It does not.”

HHS asked Friedrich to limit her rulings. She decided “the court must set aside the CDC order” since the “plain language of the Public Service Act unambiguously forecloses the nationwide eviction moratorium.”

Ethan Blevins, an attorney for plaintiffs in related cases, said that courts are increasingly less willing to defer to the government because they are seeing the harm to landlords, particularly smaller property owners, who face “foreclosure or other severe costs because they have been unable to survive as a business during the pandemic.”

He said the effects could be most pronounced in states like Texas and Florida, which don’t have their own statewide eviction moratoriums.

Congress should have made the law broader by including the phrase “and do other good stuff”.

She is a US District Judge for the District of Columbia, appointed and confirmed in 2017. So thank Trump for her being on the bench.

While I’m encouraged by the outcome, I’m not encouraged by both the legal reasoning and the amount of time it’s taken. Where in the USC can I find an enumerated power that cedes to the federal government the authority to prohibit evictions?

To me, whatever the statute says or doesn’t say is irrelevant. Congress has no authority enact ‘eviction moratoriums.’

“the amount of time it’s taken”

This is a feature, not a bug. Congress passes unconstitutional laws and bureaus write unconstitutional regulations knowing full well that they will remain in effect until some court can strike them down, meaning they are almost always assured at least a year of operation. And in that time, they can force compliance in an irreversible way.

Example: In 2015. the Supreme Court struck down an Obama administration EPA regulation requiring onerous emission controls on coal-fired power plants (Michigan v. EPA). But the EPA crowed that it didn’t matter, because “[the regulation was put into force] three years ago. Most of them [plants] are already in compliance, investments have been made, and we’ll catch up.”

This is how the game is played. Pass the law, grab the guns, melt them down quick-quick, and when SCOUS says it was unconstitutional, oh, so sorry, guns all gone, can’t give them back. Rinse and repeat.

Along with every state’s Emergency Powers Act, this Public Health service Act must be totally revamped to stop this from happening ever again.

Why this particular edict wasn’t challenged months ago by every landlord in the country is beyond me.

I suspect many are afraid of being branded a ‘RAYCISS’ and having their livelihoods threatened by the progressive shock troops.

Because most of the people actually being affected simply didn’t have the money necessary to actually fight this bullshit. They couldn’t afford to spend tens of thousands of dollars only to be told by a mouthbreathing Obama judge FOLLOW TEH SCIENCEZ.

And nothing chills your ability to sue even more, than having your source of income cut off. They know this, and they try to bring this weapon into play whenever they can.

We’ll see if DOJ actually concedes the judge’s authority to so rule. I’d bet not.

A) it exceeded the CDC’s authority under the applicable statute

B) it was a taking under 5A

Maybe Landlords should SUE “dr. falsey” for their RENTS! Seems like HE was making all the calls!