Trump hated the media, but I remember him giving impromptu press conferences in front of the White House. 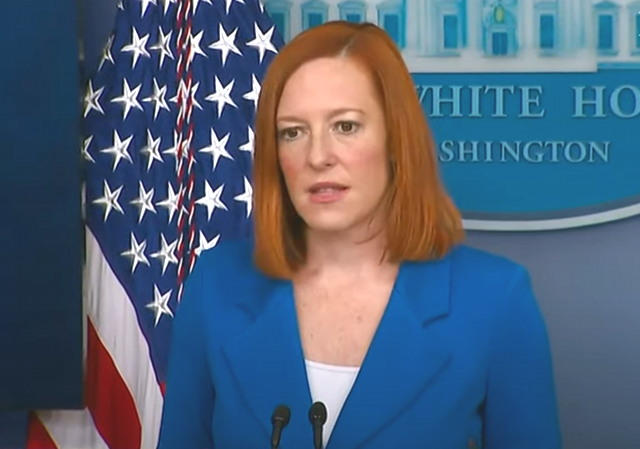 Axlerod gave Psaki a sympathetic tone, at least to me, implying the administration does not have a choice but to keep Biden on a short leash:

During one portion of the interview, Axelrod asked Psaki “about the handling of Biden.” He noted that the president has “never exactly” been “a precision instrument,” suggesting one of his weaknesses – and strengths – is that “he says what’s on his mind.”

“It seems to me that you guys have done a good job of managing that, because a lot of his interactions are speeches and settings in which you have a pretty good sense going in what he’s going to say,” Axelrod pointed out.

“I think the thing that’s interesting is that he actually takes questions – I mean he took questions, I mean he did a mini press conference yesterday. He takes questions nearly every day he’s out from the press,” Psaki said after Axelrod wondered about the “impromptu interviews.”

Just wow. “The handling of Biden.” So when we call them his handlers we’re not lying.

The two began discussing the subject when Axelrod asked Psaki about a particular instance when Biden inadvertently ran into CNN reporter Kaitlan Collins at the White House, who proceeded to ask the president if a minimum wage increase to $15 would be included in the coronavirus relief package that was signed into law in March.

Axelrod stated that Biden gave the honest answer that he didn’t think the increase would be included in the bill, but him telling that to the reporter must have given Psaki a lot of heartburn and made her ask herself why Biden would be allowed to roll around in the hallways doing impromptu interviews. He then asked Psaki how she managed that.

Psaki laughed off the incident, and explained that it happened after she had already left work and Biden was heading back to his residence. She then claimed that Biden takes questions “nearly every day that he’s out in front of the press.”

“That is not something we recommend. In fact, a lot of times we say ‘don’t take questions,'” she continued. “But he’s going to do what he wants to do because he’s the president of the United States.”

ACKSHUALLY, ma’am, he is known for leaving everything without taking any questions. It took him 65 days to hold a solo press conference.

I’d be happy if she quit taking questions too. What a waste of time.

we’ll have to circle back on you for that…

meanwhile, we have to figure out where “President” Pudding Brain has wandered off to.

Well of course, when your POTUS* is LITERALLY MENTALLY RETARDED, you can’t have him going off script.

They hated Trunp because he spoke what was on his mind.

They love Biden because he speaks what’s on his mind.

They hated Trump because when he spoke mostly of the time he lied, not because he spoke his mind

They love Biden because he is nothing like Trump

“ They hated Trump because when he spoke mostly of the time he lied, not because he spoke his mind”

If that were the case, why did they adore Obama?

I am not one who is going to swear up and down about Trump’s shining integrity, but when you have blood libel of Republican candidates by the Press going back to Thomas Dewey, the common thread isn’t that President’s dishonesty.

And this is before I get into how many of Trump’s statements were falsely categorized as “lies.” Anyone remember nonsense like the Russian Bounties nonsense?

“They love Biden because he is nothing like Trump”

And this is why I treat you as a shameless liar. Because statements like this show you as such.

Seriously, have you E V E R studied Joe Biden’s political career or personal history? There’s a reason why our own NeoNeocon noted his soulless, remorseless dishonesty, bad faith, glibness, and willingness to smear and harm the innocent even when she was still a Liberal Democrat.

I could point all of his many gaffes and worse when he opposed Civil Rights, but his falsely accusing someone of being a drunk driver in order to garner sympathy points on TV (and doing so repeatedly in the face of corrections) is perhaps one of the best illustrations of how Biden has been allowed to get away with slanderous lies about even ordinary people and a left leaning press has largely enabled him.

Yeah, what a guy. Not at all like Trump.

(and dishonest “fact checks” by the #MFM don’t count. you have to produce real, out & out lies he told publicly)

It’s still unclear whether the phrase “very stable genius” was counted as 1, 2, or 3 lies.

What did Trump lie about? What has Biden lied about?

Please give specific references to actual lies for both (i.e. not the media lying about what was actually said).

Before the election, Biden repeatedly claimed to have “a plan to get the virus under control.” After it, he said “there’s nothing we can do to change the trajectory of the pandemic in the next several months.” One of those is clearly a lie.

Biden claimed he inherited the immigration crisis from Trump, and he now has it under control. Six lies are involved here.

“he speaks what’s on his mind”

Large problem! Joe Biden is stupid. He has been making “gaffes” for over 40 years, the dinosaur media, a wholly owned subsidiary of the Democrat party, has been covering for him for decades. Now he has dementia. His family and party are committing elder abuse in front of the whole world.

Jackass Joe is not only stupid, he’s a a grinning imbecile who’s been a worthless, lying, federal tit-sucking parasite for his entire career acting like the arrogant manager of a used car lot with the personality of a drunken, Tourettes-addled Winnebago man hamstrung by the mental agility of Karl Childers! Now we can confidently add Traitor to this bonehead’s sketchy resume as a complete tool and a Useful Idiot!

I m not sure of your characterization of Bien’s mental condition. He had two brain surgeries for aneurysms in 1988, one of which had burst. He was lucky to survive … my brother-in-law did not. My suspicion is that his subsequent mental issues are related and not that he has suddenly gotten dementia – perhaps a distinction without much of a difference. However, as others have noted, MLK would likely have found “the content of his character” lacking as well.

There’s nothing sudden about his dementia.

As usual, they want it both ways. If only they had a way of knowing when his brain synapses would work and when the plasticity level turned the brain completely off. This may explain why, in the middle of a thought or sentence, the deer in the headlights looks overtakes Biden’s face and he is rendered speechless (not because of anything brilliant or even intelligent that he has said rather because he is in true brain freeze). I wonder if they implanted a receiver in his inner ear so that they could talk to him without any possible detection of the receiver or anything like an ear bud or hearing aid.
I wonder if this is part of the reason that Kammie remains masked and almost always over Joe’s right shoulder when he speaks. That would allow her to whisper those sweet nothings that he frequently utters when asked a question. Likely she tells him he’s in trouble and that’s why he tells us he’s in trouble.
Gin Saki needs to stick to her bar. She isn’t a whole lot more cogent than Joe!

The media were dying to invoke the 25th Amendment when Trump used both hands to drink a glass of water! How things have changed,

Actually, I’m surprised at least some of them don’t raise the issue; they’d LOVE to have Kamala running the show.

Biden’s 100 Days Unexpectedly Misses 2 Million Job Target By 1.3 Million Jobs
The White House prepared to celebrate a jobs-gained milestone of 2 million on Friday under President Joe Biden during his first 100 days — but those plans were shattered by the devastating jobs report for April.
Punchbowl News reported Friday morning that senior White House staffers were watching the jobs estimates of created 700,000 jobs, eager to promote the record number of jobs created during Biden’s first 100 days.

Obviously, Biden’s profound cognitive decline Psaki is trying to obscure gets zero coverage in the mainstream media (even FNC ignores it through most of the broadcast day). But, it should be noted that foreign news outlets aren’t being so charitable. Reporters in other countries are in fact commenting on Biden’s mental acuity.

Our friends and enemies understand that the leader of the free world is a simpleton but our own press can’t bring themselves to talk about it publicly.

Nothing new to see here. Psaki is just confirming what we’ve all known about Joe since day one. That two massive strokes and advanced age have taken quite the toll on his cognitive and mental abilities and he is not fit to perform the duties required of the office of the president of the United States. But here we are, and there Joe is, and there’s not a whole lot that can be done that wouldn’t make the situation even worse. Truth

And he was a fucking moron BEFORE the two strokes.

True, but at least he was a moron that could put two complete sentences together without getting confused, frustrated and babbling nonsense. Far cry from the train wreck he is now.

He’s so far gone he’s not even interested in groping little girls any more. I bet the dementia drugs are making him limp

what the hell would you ask him anyway?–you’d have to stay away from the tough ones: what’s your name?, what day is it?, where are your blocks?, do you need some private time?

And I don’t even need Biden to handle those tough questions for me, I have Alexa now.

The very moment his mind finally fades to the point babbles nonsense syllables, like a baby not yet speaking, the Chinese will likely move in on Taiwan in a big way, and the Russians will Do Some Interesting Things in the Black and Baltic Seas.

The problem with Biden “speaking what’s on his mind” is that nothing is on his mind. It’s obvious to everyone that his “mini press conferences” are pre-scripted.