Susan Hennessey was one of the loudest and most obnoxious voices pushing the Russia hoax. 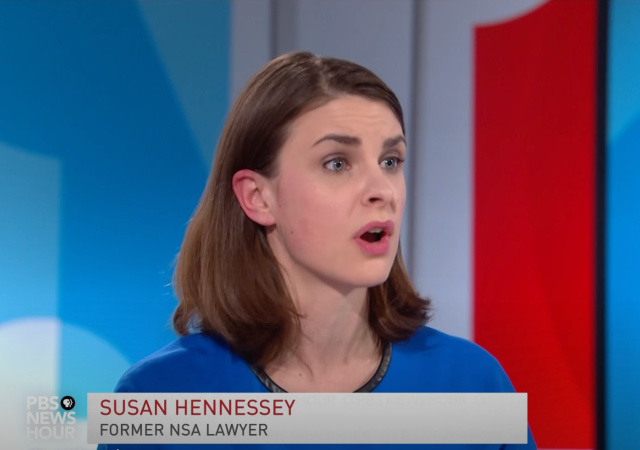 The Department of Justice National Security Division hired Susan Hennessey. You should know her because she was one of the loudest Russian collusion hoaxers in the media during President Donald Trump’s administration.

Oh, Hennessey also defended the illegal FISA warrants so our privacy is totally in good hands. Then again, she’s a former NSA lawyer.

I'm very honored to be joining the extraordinary team at the Department of Justice in the National Security Division. Thank you for all the kind words. (And a huge thanks to the folks at WH PPO, agency WH liaisons and HRs who are working night and day to staff this government.)

So what is the purpose of the National Security Division (NSD)? President George W. Bush and Congress blessed us with it in 2006 with the USA Patriot Reauthorization and Improvement Act. (Please note the sarcasm) Of course, it does not have a narrow mission:

The mission of the National Security Division is to carry out the Department’s highest priority: protect the United States from threats to our national security by pursuing justice through the law. The NSD’s organizational structure is designed to ensure greater coordination and unity of purpose between prosecutors and law enforcement agencies, on the one hand, and intelligence attorneys and the Intelligence Community, on the other, thus strengthening the effectiveness of the federal government’s national security efforts.

National security. International? Domestic? I guess anyone they deem a threat to the country. (Or to the administration’s plans to spread big government)

This would be like the Trump administration hiring Alex Jones. A lunatic who spent 5 years spinning outlandish conspiracy theories is rewarded for her work. https://t.co/xPdFwHnlcT

If you had even an ounce of faith left in DOJ, get rid of it. https://t.co/aVRgUmvYgF

Hennessey also deleted a lot of her deranged TDS-filled tweets before she made her announcement. Some people screenshot the tweets and tweeted out her old blogs.

A fun walk down memory lane from a couple days after BuzzFeed published the Steele Dossier.https://t.co/EUu2tTRjx6 https://t.co/a0UJ4A7bpE pic.twitter.com/RbfXZdINqX

Hey @Susan_Hennessey, why did you delete this along with hundreds of other Russiagate tweets? https://t.co/sGenwhZXXT pic.twitter.com/qd0d16DcQM

Among the *many* tweets that @Susan_Hennessey purged from her account is this one:

Smearing Amy Coney Barrett, claiming that her religion disqualifies her from SCOTUS.https://t.co/8zOQy3vVLY pic.twitter.com/mixTZQ0yYW

The @JoeBiden admin just hired Liberal CNN Journo @Susan_Hennessey — who ***blamed the United States*** after Iran shot down a plane with 176 people on it — to DOJ's NatSec division.

Hi @Susan_Hennessey, why did you delete this tweet? pic.twitter.com/OPWGt6TqnE

They are thinking ahead for they must know they are going to need to have some more illegal FISA warrants defended.

Is this close enough UserP?

The FBI Seized Heirlooms, Coins, and Cash From Hundreds of Safe Deposit Boxes in Beverly Hills, Despite Knowing ‘Some’ Belonged to ‘Honest Citizens’

This is not a strange hiring decision. It should be regarded as simply a payoff for previous services.

They tell us every day what matters to them. We should pay attention.

The number of sycophants on twitter tripping over themselves gushing with congratulations and calling it a great day for the country is so nauseating and depressing. Then again, it is Twitter, the absolute lowest sewer of humanity.

More than owned slaves (estimated at 1.4%)

This brings up a few questions to me

1. Is this from the “professional/permanents” at the DOJ or is this from Merrick Garland? If it is a Merrick Garland thing then it is a lot less bad but if it is from DOJ permanent bureaucracy the rot is worst than we could have imagined.

2. Biden fights with all of his might all of the time, why are we white washing him with all of ours? (Sleepy Joe, not really in charge, weak etc all of the above negates him as an opponent and makes him more appealing to moderates).

3. Would the same happen with a Republican senate able to vote to minimize funding for the DOJ to borderline nothing?

4. What if anything can we do about this? Republicans have no institutional power, no cultural power, we control no portion of the elected part of the federal government, and governors/state legislatures can’t impact the DOJ.

Impact the DOJ? The states can’t even use their Constitutionally guaranteed powers with this totalitarian regime in power.

“but if it is from DOJ permanent bureaucracy the rot is worst than we could have imagined.”

Why are you still imagining? The DOJ barely ever did a single thing Trump (their boss) directed them to do. The DOJ is the thickest part of the swamp.

The d/progressive are choosing to empower crackpot after crackpot. They are placing these very far left ideologues with tyrannical tendencies into significant appointments.

The d/progressive are not even going through the motions to pretend this isn’t who their party has become. Issue after issue they choose more spending, more tax and less individual liberty. Every time.

Rewarded for her hatred of Trump and conservatives

I take it that this is not a position that requires Senate confirmation.

That’s right. It’s not a political appointment, it’s a straight public service job, which supposedly means that she applied for it in the normal fashion and was chosen by the completely non-political staff on completely non-poltical grounds. Exactly like the 100+ civil service appointments made by the voting rights division of the 0bama DOJ, all of which by the most amazing coincidence just happened to be committed and experienced left-wing activists. In other news a winged pig, who flew here to escape a blizzard in Hell, has listed the Brooklyn Bridge for sale.

Would a stand down order for the DOJ for a purge the way Biden did with the military be possible if we win 2024?

We really can’t live with a two-tiered justice system run by and for the left.

The question you need to ask yourself is: when are elected Republicans going to have the balls to fire as many existing position-holders as legally possible and then re-staff them as partisanly and ruthlessly as Democrats always do?

Or, more to the point, the question: when and how do we replace the current Republicans with people who will?

You can’t do that without power.

So she is the reason the word “collusion” became annoyingly common?