Hamas chief Haniyeh thanked “the Islamic Republic of Iran, who did not hold back with money, weapons and technical support.” 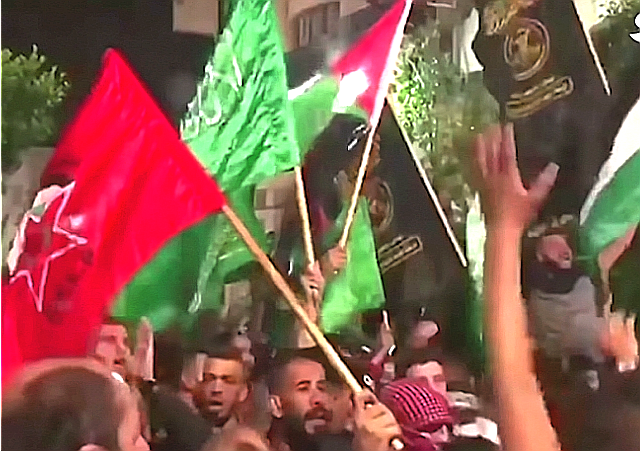 As the ceasefire on Friday night ended the eleven-day hostilities between Israel and the Islamic terrorist group Hamas, thousands of Palestinians held victory processions in Gaza.

The residents of the Hamas-controlled territory screamed “Allahu Akbar” and triumphantly fired shots in the air to mark the end of hostilities which began when Hamas, Palestinian Islamic Jihad (PIJ), and other terrorist group started firing rockets on Israeli towns and cities.

Israeli Prime Minister Netanyahu lauded IDF’s success in the counter-terrorism campaign. “Hamas can’t hide anymore. That’s a great achievement for Israel,” he said. “We eliminated an important part of Hamas’s and Islamic Jihad’s command echelon. And whoever was not killed knows today that our long arm can reach him anywhere, above ground or underground.”

With over 600 Hamas rockets landing on Gaza, the Islamic terrorist group emerged as a greater threat to Gazans than the Israeli military. While Hamas used highly-populated residential neighborhoods to fire rockets on Israelis, the IDF undertook every possible precaution to save lives in Gaza—often at the cost of compromising the element of surprise and allowing the terrorists to escape the scene.

Despite Hamas’s cowardly use of Gaza civilians as human shields, thousands came out to cheer the Islamic terrorist group. The Times of Israel reported the macabre celebrations in Gaza:

As the truce started, a frenzy of life returned to the streets of Gaza. People came out of their homes, some shouting “Allahu Akbar” or whistling from balconies. Many fired in the air, celebrating the end of the fighting. “This is the euphoria of victory,” said Khalil al-Hayya, a senior Hamas figure, in front of a crowd of thousands of Palestinians who had gathered in the streets to celebrate.

Thousands also gathered Friday morning in the southern Gaza Strip town of Khan Younis outside the family house of Mohammed Deif, the shadowy commander of the Hamas military wing, the Izz al-Din al-Qassam Brigades, who had ordered the rocket attacks.

Supporters shouted “victory” and waved green Hamas flags. Ali Barakeh, an official with Islamic Jihad, a smaller terror group that fought alongside Hamas, said Israel’s declaration of a truce was a defeat for Prime Minister Benjamin Netanyahu and “a victory to the Palestinian people.” (…)

Palestinians also came out into the streets in West Bank towns and in East Jerusalem, with some setting off fireworks in celebration.

Hamas chief Ismail Haniyeh praised Arab rioters who went on a violent rampage across Israel as Gaza-based terrorists fired relentless barrage of rockets on Israeli cities and towns. He also thanked Iran’s Shia-Islamic regime for the money and weaponry that made the latest round of terror campaign against Israel possible.

“Jerusalem remains the center of the conflict,” [Haniyeh] said, indicating that despite the ceasefire coming into effect, the reality is still highly volatile and suggesting that Hamas has no intention of stopping its effort to destabilize Israel, by arranging and funding riots across the country and at the Aqsa Mosque specifically.

According to Haniyeh, the fact that many Israeli Arabs joined the nationwide riots while the Gaza operation was ongoing proves that they support Hamas and its leadership as the main oppositional force to Israel. In another attempt to draw as much support as possible, the Hamas leader promised to provide financial support to anyone in Gaza who was injured or lost their home during the operation.

Haniyeh concluded his speech by thanking “the Islamic Republic of Iran, who did not hold back with money, weapons and technical support” and by suggesting that others will soon join. “We will use the aid of other Arab countries as well.”

Hamas’s hold on power depends on projecting an image of invincibility to Gazans and Palestinians in general. So far, the terrorist group has tried to downplay its losses, but public celebrations of its jihadi fighters are painting a different picture.

2/ Here they are at the top of the poster #PalestinianIslamicJihad #Gaza pic.twitter.com/b74F6Cpdiv

On Friday, Hamas held funerals for at least 18 jihadis whose bodies were recovered from the debris of the underground terror tunnels destroyed by the Israeli air force. The numbers of actual Hamas losses in the tunnels are believed to be much higher.

The Israeli airstrikes reportedly destroyed more than 60 miles of the tunnel network, also known as the “Metro” used for moved of armed terrorists across Gaza.

According to reports from #Gaza, 18 militants have been identified after being killed by IDF airstrikes against underground tunnels. I expect this number to grow. #Israel pic.twitter.com/1NgOiii2Vz

The IDF also foiled a major Hamas cross-border raid ahead of the Friday’s ceasefire. The terrorists used secret tunnels to sneak close to Israeli posts along the Gaza border in an attempt to launch a surprise assault. An Israeli air strike neutralized the attackers.

The outlet added that if the attack had been successful, it could have scuttled the agreement between the two sides, likely leading to prolonged violence.

According to the report, the IDF identified a Hamas terror cell as it made its way through an underground tunnel, apparently with the intention of emerging in Israel and attacking soldiers.

The Air Force carried out a precision strike and eliminated the terrorists, the report said.

Israel’s new underground barrier would have prevented them from crossing and attacking civilians, but would still leave troops vulnerable to attack, according to Channel 12.

Meanwhile, pro-Hamas Palestinians continued rioting in Jerusalem despite the truce. “[P]rotesters threw bottles at cops on the scene, while chanting incitement and singing songs in praise of “martyrs”,” The Times of Israel reported on Saturday.

Of course they claimed victory. What better way to keep the donations rolling in?

“Donations” from the Biden administration, no less. Iran couldn’t have funded a Hamas strongly-worded-letter-campaign under Trump, but Biden got funds flowing right into Iran’s and thus Hamas’ pocketbooks. They spent it as expected.

And it IS a victory. They’re going to destroy Israel by attrition. And destroy it they will. It’ll start World War 3, but what do they care?

Must be seen: Kamala Harris shakes hands with the South Korean president, then wipes her hand on her pants in disgust:

You’d think it would be the president of South Korea who’d be gross-ed out touching her overused hand-job mitt.

They are celebrating their hard won Pyrrhic Defeat,

one cannot deal rationally with irrational people. the Arabs in Gaza are willfully delusional.

and “president” Pudding Brain wants to give them our tax money? further proof that stolen elections have unpleasant consequences.

We’re in the same ‘boat’ in the United States. It’s only a matter of time till all hell breaks loose.
Seccession is our only hope.

Hamas chief Haniyeh thanked “the Islamic Republic of Iran, who did not hold back with money, weapons and technical support.”

And just as I said. A worthless “cease fire” while the Hamas terrorists regroup, are re-armed by Iran, and they look for another bogus reason to start lobbing missiles at Israeli cities and citizens. The IDF should have bombed Hamas into the stone age (or earlier) and been done with the farce of “cease fires” and “peace talks”.

Hiding behind civilians and deliberately targeting civilians are both war crimes. Israel should not give notice of bombing buildings, and should target all the same types of buildings in Gaza that Hamas targets in Israel. Give the Fakestanians reason to remove Hamas themselves.

Imagine if all that money was spent on improving the lives of Hamastinians instead of trying to kill Jews. Gaza would actually be a paradise for its residents.

Imagine if all the money spent on American ‘black leaders’ was spend on improving black lives. But then, it is a scam, isn’t it. Same in Palestine.

It would be kind of funny if Hanas had a work acident while trying to procuce a fuel air device, better if there was more than one.

If that’s what they call VICTORY, I’d hate to see what they consider DEFEAT.

Rumors are that thousands of Hamas fighters died in the tunnels (which became death traps when Israel bombed them).

The Hamas money grubbers (that’s all they are) will simply impoverish their citizens and enrage them at Israel, falsely blaming Israel and the US for their problems.

There is no difference between black lives matters leadership and the Hamas leadership. Well, maybe one: Hamas wasn’t spotted in Malibu, CA spending 20k a day partying.

If that’s what they want to call what happened, may they have many more such “victories”.

Well, they did pretty good, They came in second place.

And he was right. He survived in a position of power and was able to make trouble in the region until Jr picked up where dad failed. And then managed to compound dad’s failure. Ultimately Iran won. And as long as Comrade Biden silently supports Hamas Iran will continue to win.

“One more such victory and I am undone”.

It is often misleadingly said that Shia and Shiite are enemies. That’s technically true, but so long as there are infidels to kill and subjugate they will happily cooperate with each other to accomplish that holy aim, as seen here.

Of course they get no jail time. If they did, the elite might not get the cooperation they require next time they need to off someone in jail.