Court denies motion to dismiss the lawsuit, but did not grant a prelminary injunction as to the current 8th grade class in the middle of the admissions process. The case moves forward into discovery and possibly another injunction hearing in the fall. 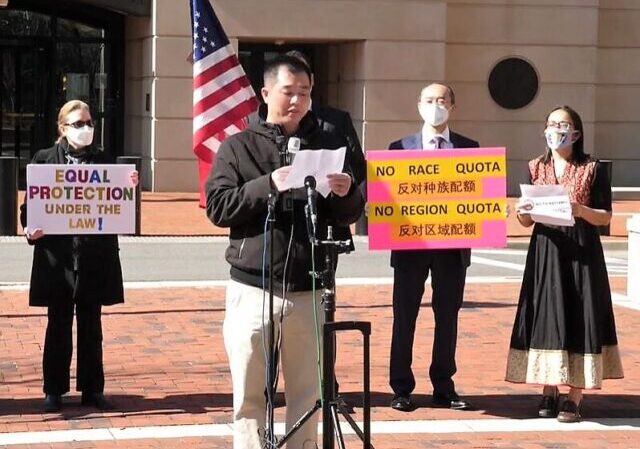 We previously covered a lawsuit alleging that proposed changes in admissions criteria to the top-ranked public Thomas Jefferson High School for Science and Technology (TJ) were motivated by a desire to reduce the percentage of students of Asian descent at the school, and to increase the percentages of Blacks and Hispanics.

See these posts for background and allegations in the lawsuit:

Defendants opposed the injunction, and also filed a Motion to Dismiss the case (the plaintiff’s opposition is here.)

A hearing was held in court today before Judge Claude M. Hilton on both the motion for preliminary injunction and motion to dismiss. My understanding is that the Judge expressed skepticism with the defense arguments that the policy changes were race neutral, particularly in light of the public record of school board member statements and the obvious intention to reduce the Asian enrollment for diversity purposes. But while allowing the case to move forward, the Judge also did not want to issue an injunction that would disrupt the selection process for 8th graders (incoming high school students) which is currently in process. Normally this process takes place in the fall, but was delayed this year to the spring. An injunction still could be considered for the current 7th graders who will be 8th graders next fall when they apply.

The court issued a docket entry reflecting the ruling, but has not yet issued an Order (which may contain an Opinion explaining the ruling). 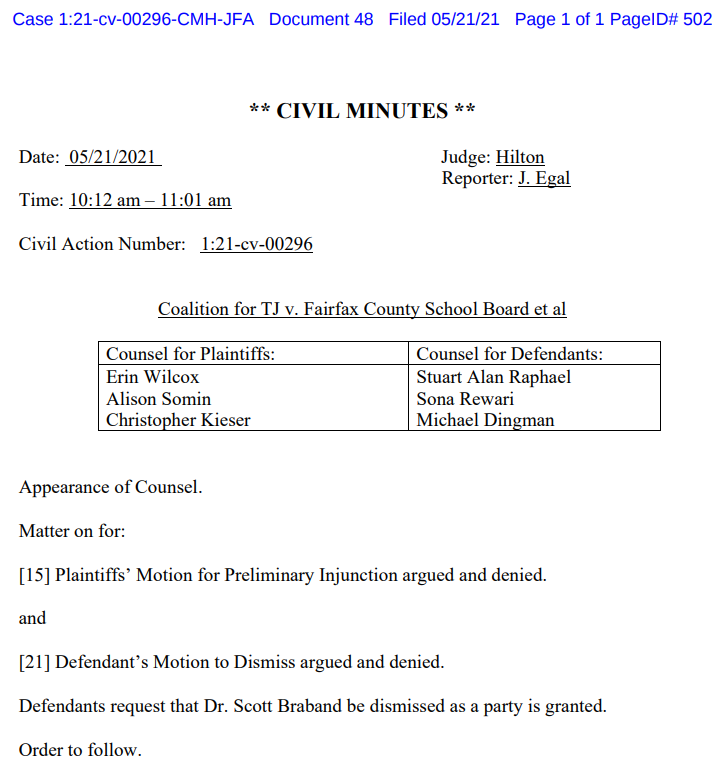 So the case moves forward to discovery. The Judge apparently expressed that perhaps the case could be resolved by the time the next incoming class applies in the fall, but that’s far from certain. A lot will depend on how hard the school officials demanding racial and ethnic redisribution continue to fight the case.

I bevieve that this is the first such case to survive a motion to dismiss. As we covered previously, a similar case in Boston was dismissed and is on appeal.

I’m not surprised. Last month when an Asian woman named Chloé Zhao won an award at the Oscars the news media proudly proclaimed, “First woman of color wins Oscars Best Director.” And just like that, Asians are now people of color.

People of Color is just code for “Negroes”, and I don’t think a whole heck of a lot of Asians think of themselves as POCs.

I think they might get annoyed by the whole mess, for the same reason that Jews are. A person who is jewish might be white or might be a poc, depending on the prejudices of the speaker. What kind of nonsense is that?

Humpty-Dumptyism is a central operating practice of totalitarianism.

I am thrilled to see VA’s Thomas Jefferson High lawsuit moving ahead, I also thing that parents should be creating either a charter or private high school with merit based admission standards, and leave Jefferson with whatever is left.

Merit is racist. That is why advanced math and science classes are now no longer allowed in many districts.

My question is, since the court didn’t enjoin the new rules for the current class, should the parents win this lawsuit, can we look forward to a spate of new lawsuits against the school from Asian students who were “selected out” of the current class? For hopefully lots and lots of damages?

BIPOC is a category of political convenience. Linda Sarsour and Rashida Tlaib are BIPOC. Clarence Thomas and Candace Owens and Tim Scott aren’t. South or East Asians are normally not BIPOC, except on occasions when it’s politically expedient to extend the umbrella over a few of them. Native Americans are BIPOC—but not the leaders of the Cherokee Nation of Oklahoma when they said Elizabeth Warren wasn’t descended from anyone they had a record of.

In one of my happy dreams, Elizabeth Warren gets followup mail from 23-And-Me disclosing that she is a direct descendant of George Custer.

Diversity [dogma], inequity, and exclusion is quasi-legal under the Twilight Amendment (“penumbras and emanations”), but is diametrically at odds with the letter and spirit of The Constitution.

Momma, don’t let your baby… fetus… baby grow up to have a competitive work ethic.

Ok, it’s official. Your comment system is the WORST! I write so many comments that are summarily erased by random web page refreshes. It’s so annoying.

The three links all lead to the same legal briefs. Can you please attach the other legal documents if they are distinct (and the implication is that they are)? I’d like to read them.

The links have been fixed.

The issue is strictly a funding issue. Why should Virginia taxpayers pay state taxes to fund an advanced math/tech school in NOVA that acts as a private finishing school for predominantly Asian students (some who are literally foreign citizens) from comparatively wealthy families?

Here is a good article from 2017:
https://www.washingtonian.com/2017/04/26/is-the-no-1-high-school-in-america-thomas-jefferson-fairfax-discrimination/

Note: The Asians protested the use of admissions criteria that include English proficiency.

Note that the current admissions system gives wealthy parents tremendous advantages because they have the money needed to get their children into the NOVA advanced math/tech school. It takes wealth to 1) move to the areas of the lower schools with high acceptance rates to TJ, 2) pay for continuous rigorous study sessions and tutors from third grade on, and 3) pay for expensive extra test prep.

I wonder that part of the reason that the TJ school ‘flipped’ from a predominantly white to Asian student body is that wealthy Asian immigrants had more wealth along with internal and external community support than white citizens for long term test prep.

Meanwhile, wealthy parents clearly have the resources to fund their students’ private education instead of expecting Virginia taxpayers to fund this endeavor.

Is there a reason that public schools are subpar in low-income (typically Democrat-run) areas infested with teacher unions that care more about themselves than the kids? Hmmmm, let’s think.

You may be surprised to know that many private school teachers earn considerably less than their taxpayer-funded peers, yet they choose to teach in these schools not for the money but because they get support AS TEACHERS and not as communist activists posing as teachers.

The problem is not the “wealth” of the students–or of their parents–but of the degrading of public education to cater to the twin problems of teacher unions and the general Marxist trend in education that sends “teachers” out to teach subjects they know next to nothing about, but boy do they have their “anti-racism” racist propaganda down pat.

Instead of tearing down private and charter schools, why don’t you advocate for better public schools in all districts and regions? If public schools were worth attending because they provide a solid education, there would be no need to gripe and whinge about “rich” people vs. poor. But public schools, typically, are laughably horrible, even in “good” neighborhoods.

But that’s the regressive way, right? Instead of fixing failed public schools, it’s so much easier to point at “those people” and blame them for . . . um, what? How did they destroy public education? By opting out once it sunk to such levels that illiterates (literally people who can neither read nor write) graduate? Yeah, let’s blame the people who want their children to know such “white” and “elite” things as reading and writing.

To sum: Test prep is NOT an indicator of genius!

Fuzzy Slippers: This is a difficult conversation to have in a meaningful way because people are making points about this specific school issue from their own personal experience in other states than Virginia. I live in Virginia.

Here is an interesting article: https://www.businessinsider.com/virginia-high-school-senior-harvard-stanford-admissions-hoax-2015-6

To understand the ACTUAL problem, put that statement together with the FACTS in the article linked above. There are other media articles, but they are behind a paywall. As I recall, the TJ student was an actual foreign citizen from Korea whose dad was an ambassador to the USA.

Someone explain WHY I should consider a Korean ambassador’s child to be an Asian-American?!