Over 19,000 Los Angeles area residents sign petition against proposed plan for more tent encampments at other parks and beaches. 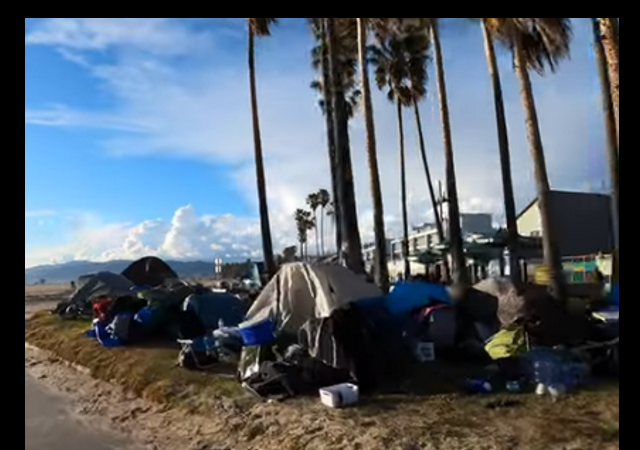 I moved to San Diego for school in the 1980s. The Venice Beach boardwalk was one of the must-see sites on my introduction to California.

The iconic site has tourist shops, street entertainment, weight-lifters, and surfers. Residents enjoy the sun, waves, and atmosphere. But, unfortunately, the area has devolved into what locals call a ‘dangerous’ homeless encampment.

The LA neighborhood — site of the free-spirited boardwalk frequented by colorful street performers entertaining visitors strolling by funky stores — has been hit with a spate of violent incidents, Fox News reported.

On April 28, a man survived a shooting at the coastal hotspot known for its bohemian spirit, the LAPD told the network. A recent explosion caused a fire inside one of the encampments dotting the walkway known as Ocean Front Walk.

Residents and merchants are dismayed over the recent incidents, which occurred amid the expansion of local unsightly encampments, as well as a citywide homeless crisis that has grown worse in recent years, according to the news outlet.

Over five years, the homeless population has increased by 50 percent, Fox News reported, citing a January report from the Luskin Center for History and Policy at UCLA.

Now, thousands of Los Angeles residents are revolting over plans to house the homeless in tents and temporary cabins near other popular beaches and parks throughout the city.

Bonin, who represents affluent communities including Venice, Westchester and Brentwood, argues that the ‘temporary solutions’ will ‘get people off the streets and into homes’.

But more than 19,000 people have signed a petition to stop the plans.

The petition asserts that the proposed camps are not a solution to homelessness and would bring the problems of drugs, mental illness, crime and danger into the communities where the tent cities would rise.

A local known as German in Venice documents the spread of tents, filth, and mayhem. He has gained quite a following, with over 1.7 million views of the deterioration.

Another Venice resident, Crocodile Dundee star Paul Hogan, is also fed up with the homeless crisis. As a result, his native Australia is beginning to look very appealing.

The reclusive Australian actor, 81, lives in the once-desirable beachside suburb of Venice, where crime and homelessness have spiked in recent months during the Covid-19 pandemic.

A masked Hogan sent a stern warning to the less fortunate on Sunday as he was pictured pinning a note to his front door that said: ‘THIS IS MY HOUSE NOT YOURS.’

Hogan, who said earlier this month he was ‘desperately homesick’ and wanted to return to Australia, attached the note to his door before making his way back inside.

There are consequences to this crisis. The price of housing in the area is beginning to take a hit.

A Venice sanctuary near the beach has privacy, tons of space, natural light and a recent $250K price drop.

It features three bedrooms, three full bathrooms and a half bathroom. It also has a detached garage or studio with a bathroom. It even has a balcony perfect for watching sunsets.

Thanks to a continuous infusion of liberal policies, Venice has gone from being quirky to a catastrophe. Hopefully, the petition to stop the spread of these encampments will be successful.

So – 19,000 racists and xenophobes signed a petition against the homeless victims of white supremacy. Here’s betting that the Lefty city council will ignore them and instead cater to their big money doners.

Unless these homeless people are right-wing white supremacists, you may not describe their village as “dangerous.” Suggested alternatives: vibrant, 99-percenters, victims of racism.

Thank you for keeping Venice Beach diverse and anti-racist.

“thousands of Los Angeles residents are revolting” quite true no matter how you parse the sentence.

I wonder about your ratios, but point well made. “Homeless” is another of those politically correct terms which serves to obfuscate the real descriptions. IMO, “T” is a larger fraction than generally thought, but I can’t substantiate that.
The first step to solving a problem is to identify it–which requires using the correct terminology.
Again, only an opinion, but I think your ten percent is about correct. That is where the focus is. Maybe because the top three are intractable problems. At least unless we go back to locking them up–as we once did. That, also, has its problems.

Occasionally, a tramp’s story can astound you.

live in the South Bay LA (South of LAX while Venice is North of LAX), as I was walking to LA fitness one morning, I saw a tent along the street. The next day it was gone.

I am surprised at how few tents, urban campers, are in the South Bay (Manhattan Beach, Redondo Beach, Torrance, El Segundo etc). Liberal Beach cities (except for ES) to be sure.

There is something else going on besides the Liberal politics and the great weather. It is shocking at the difference between the 2 beach areas.

My point is I wonder if law enforcement differences are to blame?

Law Enforcement, of whom I am not an unqualified fan, can only enforce the law. That is the best we can hope of them. Look to the laws, not the cops.

I’m surprised he wasn’t attacked by one of the homeless for filming their life of squalor. It looks like he was out early in the morning before they were up & about.

It’s worse – this is all over the city. Police are hustling all day and night to address the crime committed by these people. The LA city council is infested with leftists. The mayor is a corrupt useful idiot. Crazy George Gascon is the LA DA.

In other words, this chaos is intentional.

Lock the liberals in “socialism lab” they voted for, do not let them escape and infect the rest of the country. Protect someone else, stay in your own liberal infested locale….

I lived a half-block from the boardwalk between 1984 and early 1985. I was 26 years old, and it was magnificent. There was some riff-raff, but not much. All in all, it was a great time. Among other things, I was able to watch the Olympic marathon as the runners passed down the street a half-block in the other direction from the beach.

Subsequent visits (usually as an adjunct to this or that business trip) were enjoyable, until the area began sliding. The decline accelerated after 2010, and sometime in mid-decade I declared that I would not return but rather enjoy fond memories of what was.

What a tragedy! Same goes for San Francisco, downtown Portland, and Seattle, the latter of which I lived in for 21 years before escaping in 2017 when the handwriting was on the wall. All I can do as an individual is close my wallet and stay away from places whose inhabitants clearly don’t care about their own cities.

These were fantastic places. But that was then, and this is now.

Let’s all pray to San Andreas, and hope it’s not too late.

At leas that would give the Green New Deal something to really fuss about. Imagine the subsequent pollution of the Pacific.

I have a degree of sympathy for people that live that life … but enough’s enough … that shit has to be fixed.