California Cafe Offers Discount to Patrons Without a Mask, Charges $5 if They Have a Mask

California Cafe Offers Discount to Patrons Without a Mask, Charges $5 if They Have a Mask

“It’s about time that the proponents of these ineffective government measures start paying for the collateral damage they have collectively caused.” 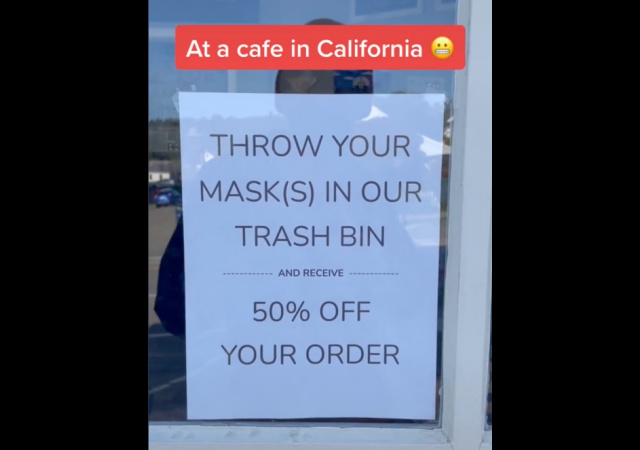 Fiddleheads Cafe in Mendocino, CA, charges patrons $5 for wearing a mask while ordering their food. However, if you toss your mask, the cafe will give you a 50% discount.

On the plus side, the cafe donates the $5 to Project Sanctuary, which helps domestic abuse victims.

In March, the cafe announced an ongoing 50 percent discount for those who throw their face coverings in the trash, said owner Chris Castleman, 34.

“I don’t think $5 to charity is too much to ask from mask wearing customers who claim to care so much about the community they live in,” he said by email.

Proceeds will go to Project Sanctuary, a local domestic abuse organization, for two weeks before a new nonprofit enters the rotation, Castleman said. (Project Sanctuary did not immediately respond to a request for comment).

“It’s about time that the proponents of these ineffective government measures start paying for the collateral damage they have collectively caused,” the owner said.

Here is a screenshot of the TikTok video that made the story go viral. 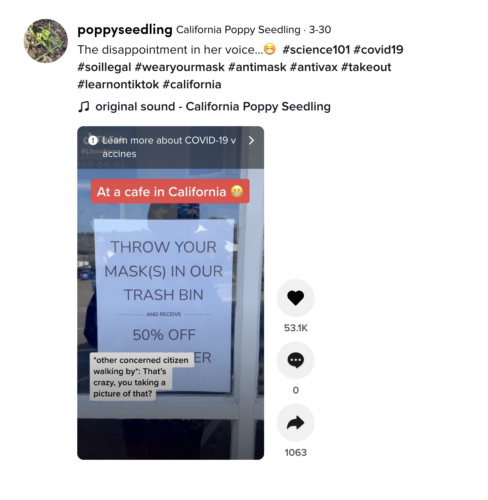 Castleman has been an outspoken opponent of the California lockdowns. He makes no apologies for his sign:

Fiddleheads Cafe owner Chris Castleman stands by his sign, however. By his own estimation, the reception to the discount from customers has been 50-50, “you either love it or you hate it,” he said. Castleman said that since he’s posted the sign, he’s received a number of bogus, negative reviews on Google from people who have not been to his cafe, but rather detest his mask protest.

“It’s very alarming how people have gotten all up in arms about this sign — the sign isn’t breaking any law or any ordinances,” Castleman told SFGATE. “If people are upset with it, they don’t have to come here. … My point is, if you don’t like me, that’s fine. I respect that opinion of yours, and you can go anywhere else in this county right now to eat and pretend that you’re in a safe environment.”

But good for this guy, whose business has made it through all of the shutdown madness. He has the right to dictate a mask policy for his own establishment.

And for heaven’s sake, how many of the mask brigade actually wear them “properly”? How often are those reusable masks being washed? If they’re the disposable type, are they only being used for 4 hours, because that’s essentially the limit before they become useless? Sheesh, I’ve had to be in the hospital for a few days in the past year and nobody cared if I was wearing the same mask for days, or not wearing it at all when I was sleeping.

I was in the hospital for a week last year, (September-ish) ICU included, nobody was wearing a mask as far as I can tell.

Fiddleheads Cafe is standing up for country we used to have.

Hopefully, masks protect the Coronabros from the vapors.

Hopefully, masks give the Coronabros the respiratory vapors.

Frankly, it’s a lot like donating to politicians in places where you’ve never lived. Which you do or you get your lunch eaten, because your opponents will.

More power to him but doesn’t seem like the best hill to die on. Hope it works out for him, though.

My kind of Café!

Too bad it’s in California or I’d gladly dine in his establishment.

I would propose an ecologically responsible bonfire of the masks, if you throw them in a trash can instead of (safely of course) burning them they will end up as water pollution.

Brilliant! Throw the Dhimmi-crats’ totalitarianism back in their miserable faces.

I’d give him business for that alone. Screw masks, they’ve never worked against viruses and most of them say so right on the packaging.

So would I, but there are many Californians that would do the opposite. Dividing your customer base seems a bit odd at this time of strain on the food industry. Hard to find workers and lots of losses have piled up over pandemic.

There’s a major positive benefit to having Karens self-identify and stay TF out of your establishment. Way fewer interruptions to speak to the manager, for one.

He’s begging to be targeted by political prosecutors, I hope that he has a strategy in mind and a lawyer pro bono.

The guy who narced on Facebook’s covert “vaccine hesitancy” algorithm has raised nearly half a million in under five days.

People will stand up for this sort of activism.

This is the way to fight –short of sending lead downrange, there is really no other.