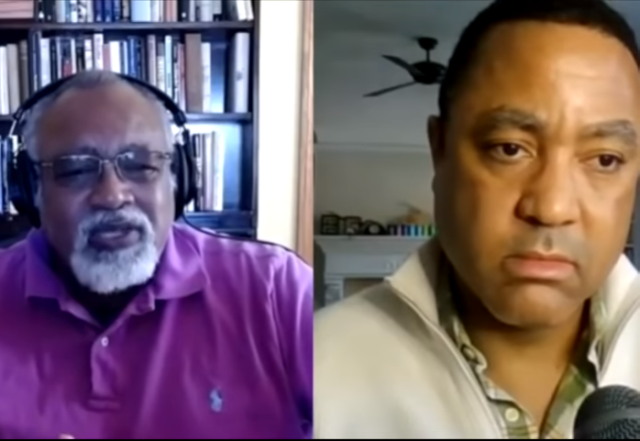 Every once in a while, we are reminded that not everyone in higher education agrees with the left on everything. Enter Professor Glenn Loury of Brown University.

Loury understands the true purpose of a college education.

During a recent episode of his podcast, he railed against identity politics. He was speaking with Professor John McWhorter of Columbia University.

Katie Pavlich of Townhall has details:

Brown University Professor Glenn Loury is speaking out against identity politics education and speaking the truth about today’s academic environment.

“We are entrusted to shepherd young minds into their maturity and to jump on a bandwagon and to fill their heads with slogans rather than challenging them with the best that human beings of any color have thought through the ages is a criminal abdication.”

Watch the two clips below:

The teaching of identity politics in American higher education is a criminal abdication of our pedagogic responsibilities, says this Ivy League prof. pic.twitter.com/Zi65wfQXeh

Have you noticed? Those running elite schools, when questioned about their obsession with anti-racism, don't even bother to defend their pedagogy. Instead, these "educators" ask, in effect: "What kind of fascist are you to criticize what we're doing?" pic.twitter.com/MZVheYWmbE

Watch a longer version below:

It’s progress in the right direction but lagging by a few years.

What’s needed is to teach good character, most of all. Start with a learned chip on your shoulder and nobody will hire you, ever.

Starting fights, displaying status and defying authority seem great as a young teen male but doom you for life.

It’s easy to teach those dysfunctional moves because, as a group average, US blacks have an average IQ of 86 (huge individual overlap with whites, but if you take averages, this is what you get), and it’s easy to say that the reason you’re not doing well is whites are holding you back. And nobody to contradict you, because the contradiction would be literally racist, albeit not malevolent.

The question for policy is what to do about it. Teaching good character always works, it’s the key to success. There’s a place for everybody if they try to be helpful, which is the habit to pick up in school.

In the legal system the dysfunction is enshrined as disparate impact. You can be jailed for good will and avoiding racism. Stand there, be accused and just take it, is supposed to unite the races, where there shouldn’t be any problem in the first place except for activists who drive it.

The issue at heart is the term “character” which is sorely missing.
Pairing Parenting and Teachers are key to the foundation. Putting these two in partnership and working together with the same goal. Being of color was a win-win of the Civil Rights of 1964 but it was marginalized when this proven partnership was not supported or enhanced by the 1965 legislation of a new social contract of the “Great Society. The foundation was set by Rev. King but went unfulfilled when with the enactment of government programs which actually marginalized families and community for the priorities of Government and effected separation within communities of color. It incentivized their lives with subsidies of programs that actually separated families within their community and their schools and ended in devaluing the ability to receive a community based education. 55 years later here we are. Where you see success by those of any color, you will see a family, a teacher in a local community where there was a partnership. It can happen a within a city or in a small town because it was a solid foundation to start from.

In my opinion, the single best solution for all the issues is that the money follows the student. Minorities are stuck on the modern “bad-school” plantations. My idea introduces competition to an industry with very little now and receiving vast amounts of money. It will never happen with the Democrats, who are busy trying to degrade Math education (VA & CA) or degrading the exam schools (NYC).

“What kind of fascist are you to criticize what we’re doing?”

The argument of the high-self esteem morally superior totalitarian. What they are doing is so obviously righteous, good, and pure that only an evil fascist, who can be dismissed and should be silenced, would criticize.

The argument used to eliminate criticism, and the critics, in the old Soviet Union. The argument currently in use by the rulers of Communist China. And now by the ruling class in the nation formerly known as the Land of the Free.

I note that the previous version of this article and all comments have been deleted – Why ? … A subtle form of censorship ? … The author’s manipulation of a “conversation by others” was not received as he intended ? … Why not simply state: “The article has been rewritten to address … “

This post was not edited or changed after publication, nor were comments deleted.

Prof. Jacobson: I have great respect for you, your intellectual honesty and courage. Yet, please reference to where the original posting was – it was focused on a discussion of “bad M*****F**k*rs” and how the “Harvard ‘Guy'” (tenured economics prof) got there because he “changed” (as if he were Eldridge Cleaver, right out of “Soul on Ice”) … I commented; I cannot find the original posting (which was beneath the editorial standards of Legal Insurrection). … And, I do not care how many “Down Votes” your readers exclaim; but you should – because it tells you something about your readers’ depth. Thank you for responding above.

Prof Jacobson, My humble apologies. The same video was discussed with different excerpts on americandigest.org –

Now apologize to the readers.

So, is anybody calling him uncle Glenn yet?

With your youngest of three kids just finishing their undergrad this year, I can say that this professor represents a hyper-minority of educators….which is really unfortunate. My daughter had such anxiety about going back to school this year but not because of COVID. Instead, she knew that her professors would be insufferably woke. They were and she was in the college of engineering where it’s not quite as bad.

Yep. Our youngest two are in college now and they are fully aware they have to tread very carefully lest they raise any suspicion from their professors that they are not fully woke.

Our son dropped an English class immediately on his first day of college when the black female professor with blue-dyed hair passed out the syllabus and told the students they would only be reading the works of “authors of color.”

Our daughter likes to yank my chain by pretending she’s a lefty, but she got a rude awakening when she suddenly received a bad grade when she argued in favor of a secure southern border for an assignment. This quarter she dropped two or three online classes when the professors, on the first day, spent the entire session bashing Republicans and conservatives.

She pretends to be sympathetic to leftist causes, but it’s just to get my goat. Her actions show she knows these people are nuts.

“This quarter she dropped two or three online classes when the professors, on the first day, spent the entire session bashing Republicans and conservatives.”

I hope she found them entertaining, if not downright laughable. I think that’s the only way I could get through school at this point.

It’s starting to get worse in engineering. Engineering profs are an easy target to be woke=pressured because most usually have their heads somewhere else.