The Jewish community is scared: “The release of the perpetrator is terribly disheartening to the community — is unnerving, is causing significant anxiety.” 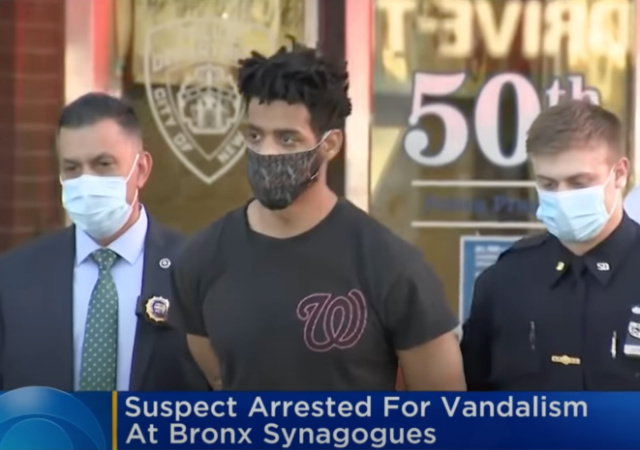 The suspect, 29-year-old Jordan Burnette, was granted supervised release by Judge Tara Collins in Bronx Criminal Court — hours after he was ordered held on bail on 42 charges stemming from his alleged 11-day crime spree, said Patrice O’Shaughnessy, a spokeswoman for the Bronx District Attorney’s Office.

Under New York state law, a suspect hit with Burnette’s charges cannot be held on bail.

But that didn’t stop Judge Louis Nock, who earlier Sunday ordered that Burnette be held in lieu of $20,000 — even though prosecutors insisted the man had to be sprung under the state’s controversial bail reform laws.

Nock stood firm in his ruling because he believed “the ‘shattering of glass’ constitutes a violent felony.”

Assistant District Attorney Theresa Gottlieb told Judge Nock the office “probably would have asked for substantial bail before January of 2020” due to the many attacks allegedly committed by Burnette.

Gottlieb conceded: “The legislature did not include hate crimes in its revision of bail reform and, under the law as it exists today, this is not eligible. We will not violate the law.”

Burnette allegedly poured hand sanitizer all over “prayer books from Adath Israel” and threw them into the woods. He is also “accused of shattering synagogue doors and windows, smashing multiple car windows.”

The attacks have frightened the Jewish community:

“We were terrorized, frightened for ten days,” Rabbi Levi Shemtov of Chabad Lubavitch of Riverdale told The Algemeiner. “Finally, when we heard shabbos [Saturday] morning that they caught him, we all felt a sense of relief. Now this morning, as Riverdale is getting up, everybody’s calling me, texting me, emailing me — we’re back to square one, and it’s even worse. Because now he has a path to do whatever he wants.”

Shemtov said he was especially concerned upon hearing that Burnette lives in the Riverdale community, close to the four Jewish institutions he targeted.

Mitch Silber, the executive director of the Community Security Initiative, shared Shemtov’s feelings: “The release of the perpetrator is terribly disheartening to the community — is unnerving, is causing significant anxiety.”

“He could walk out of his apartment, and walk to any one of the locations that he attacked, and there would be no consequence for him to do that.”

This is not “bail reform”. This is the result when (largely) rich white leftists link arms with black supremacists to romanticize criminality.

Meir Kahane, of blessed memory, would know how to handle this situation.

But, all the Trump Supporters are kept in solitary confinement.
Tyranny.

Well, they are TRUMP SUPPORTERS, for Pete’s sake.

Too bad New York City has gun control.
None of those Jewish citizens has a prayer of getting a concealed carry permit to defend themselves from this known criminal.

We learn new entries for the term equity every day. I wonder if any of the good folks in the neighborhood who now much keep a vigilant and watchful eye on him will be accused of racism should they call the police again.

Since it’s fairly obvious now that the legal system engages in a catch and release policy for criminals people should simply forgo contacting the police and take their safety and their community’s safety into their own hands and deal with these criminals as necessary. It’s a sad state of affairs when I can seriously say that but here we are. The police are defunded, the legal system is neutered, and the innocent citizens are the ones that suffer for it all.

When there are no police, most crimes will carry the death penalty.

Tell that to Kyle Rittenhouse.

Why should the police catch? The process just places them in legal jeopardy but has no impact of the person caught.

Another example, last week Ffx county Asians getting kicked out elite TJ high, of minority voting overwhelming Libby and then having major issues with result.

Realize that minorities like to virtue signal and generally hate joe blow whitely but would kinda think the elite minorities would realize figure out that modern dem party hates them as much as any DJT supporter..

Guess we’ll see as stuff gets crazier and crazier.

Asians ruin the entire – The Only way to get ahead is with help from the Dem Party – Narrative.
So, they are systematically discriminated against.

Perhaps the Jewish community should reconsider their historic preponderance of voting for the party of cashless bail, pro-riot, pro-violent “expression”, anti-police and teachers of racial victimhood.

As a member of said community who grew up in the Bronx not far from the scene of these crimes, I have always asked the same question.

Even today, over forty years since Orthodox types started voting for the GOP at the presidential level (in increasing numbers over time), their loyalty to the Dems still persists at the local level, as witness Dem state legislators and city council members from such neighborhoods in NY who support “cashless bail, pro-riot, pro-violent ‘expression, anti-police and teachers of racial victimhood.”

Eddie Coyle, I was going to say Orthodox Jews don’t vote for that party, but this is Riverdale, where they do. Culturally, Riverdale Jews aren’t the same as Brooklyn Jews. Lately, though, that’s started to change, and better late than never.

Sestamibi, their numbers aren’t enough, even in such strongholds as Borough Park and Williamsburg, let alone Riverdale, to elect Republicans on the local level. So they choose to use their numbers in Dem primaries instead. In Borough Park that lets them elect DINOs; elsewhere they just look for the lesser of many evils.

“We were terrorized, frightened for ten days,” Rabbi Levi Shemtov of Chabad Lubavitch of Riverdale told The Algemeiner. “

Time to stop being scared, arm and defend yourselves today. The politicians do not care one damn about you and your privilege in the fight for “equity” so take responsibility for your own safety. This is what blue American cities are turning into so be prepared.

Vigilance indeed. Armed vigilance. Just as courageous black pastors and men sat on their front porches after the Birmingham church arsons, armed with whatever they had, to protect their community, the Jewish citizens here will need to stand guard. Armed guard. Do it quietly, don’t be too public, don’t give the police a reason to question your presence.

But be armed, be careful, and if Mr. Burnette, or any other miscreant, decides to attack, be ready.

If you want to see the police and prosecutors leap into action, just oppose this guy and the others of his group persecuting your community.

The left is pro-criminal.

New York Jews are currently large donors to the Democrats, who have become antisemitic and opposed law enforcement. Instead of continuing to support the Dems, Jews should send their money to a Jewish organization that respects them and will support their right to protect themselves:
http://jpfo.org/

“Bail reform” is a euphemism for allowing the black underclass to run wild, without consequences.

I guess Burnette must be another Trump voter in Blackface. They seem to be very common among perps of hate crimes against Asians and Jewish People.

To complete a Trifecta, blacks are also well known as the group with the highest incidence of Homophobia.

For a group that are so scared of “hate crimes” that the sight of a supposed noose makes them fear for their lives, blacks sure do commit a huge proportion of hate crimes.

Nobody cares about white-supremacist black-on-Jewish attacks anymore — that’s so 2020!

Now all the cool kids are into white-supremacist black-on-Asian crime. Get with the program!