Hidalgo County GOP Chair Adrienne Pena-Garza: “You can’t shame me or bully me into voting for a party just because that’s the way it’s always been.” 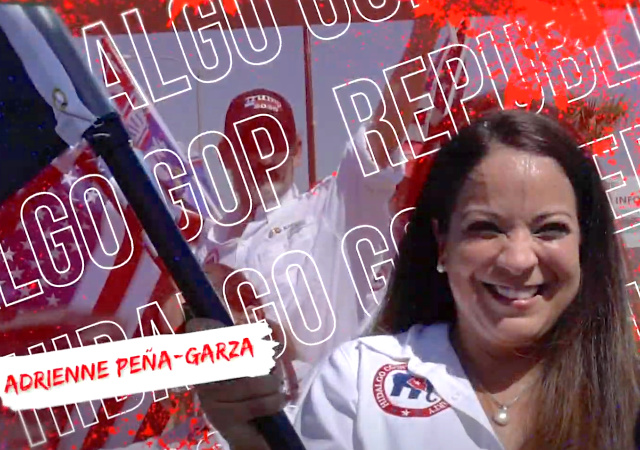 The Democrats and the left try to make people believe they will flip Texas. They make gains in Houston, Dallas, and Austin, but not in the place most think would vote Democrat.

Props to The New York Times for casting a spotlight on the Hispanic Republicans in south Texas, who took everyone by surprise in November.

You would think the political leaders along the Rio Grande belonged to the Democrat Party. I wouldn’t blame you if you assumed they identified more with the far-left.

Author Jennifer Medina wrote that when you enter the Hidalgo County Republican Party’s office you see a bulletin board with the local leaders, including Hilda Garza DeShazo, Mayra Flores, and Adrienne Pena-Garza:

Hispanic Republicans, especially women, have become something of political rock stars in South Texas after voters in the Rio Grande Valley shocked leaders in both parties in November by swinging sharply toward the G.O.P. Here in McAllen, one of the region’s largest cities, Mr. Trump received nearly double the number of votes he did four years earlier; in the Rio Grande Valley over all, President Biden won by just 15 percentage points, a steep slide from Hillary Clinton’s 39-point margin in 2016.

That conservative surge — and the liberal decline — has buoyed the Republican Party’s hopes about its ability to draw Hispanic voters into what has long been an overwhelmingly white political coalition and to challenge Democrats in heavily Latino regions across the country. Now party officials, including Mr. Abbott, the governor, have flocked to the Rio Grande Valley in a kind of pilgrimage, eager to meet the people who helped Republicans rapidly gain ground in a longtime Democratic stronghold.

Pena-Garza chairs the Hidalgo County Republican Party, but “grew up the daughter of a Democratic state legislator.”

Her father switched parties in 2010:

But after her father switched parties in 2010, Ms. Pena-Garza soon followed, arguing that Democrats had veered too far to the left, particularly on issues like abortion and gun control.

Ms. Pena-Garza said she was called a coconut — brown on the outside, white on the inside — and a self-hating Latino, labels that have begun to recede only in recent years as she meets more Hispanic Republicans who, like her, embrace policies that they view as helping small business owners and supporting their religious beliefs.

Pena-Garza declared, “You can’t shame me or bully me into voting for a party just because that’s the way it’s always been.”

Females seemed to bolster the move to the Republican Party:

Women who staunchly oppose abortion voted for the first time; wives of Border Patrol agents felt convinced the Trump administration was firmly on their side; mothers picked up on the enthusiasm for Republicans from friends they knew through church or their children’s school.

Democrats, and maybe Republicans, would think the enthusiasm was only with former President Donald Trump. But evidence shows the people also consider local and Congressional elections just as important.

“That was just what you do,” she said. She added that while she could not recall ever having voted for a Democrat for president, she had hesitated to voice her political views publicly, fearing that it could hurt her insurance business. “But I never understood the Democratic values or message being one for me,” she said. “And I am convinced that people here have conservative values. That is really who the majority is.”

During her last campaign, Ms. De La Cruz-Hernandez relied heavily on local efforts, drawing little attention from the national Republican Party in a race she lost by just three points. Now she is focusing early on building support from donors in Washington. Already, the Democratic Congressional Campaign Committee has named Mr. Gonzalez a “Frontline” member, an indication that it views him as one of the most endangered House Democrats. And in March, the National Republican Congressional Committee put Mr. Gonzalez on its 2022 “Exit List” and began airing ads against him.

De La Cruz-Hernandez plans to run against Gonzalez again, but who knows what will happen if officials reshape the district.

However, it seems Gonzalez isn’t hard-left:

Like other Democrats along the Texas border, Mr. Gonzalez has tried to distance himself from national Democrats; this year he asked Mr. Biden to rescind an executive order to temporarily stop new fracking on federal lands. Last month, he traveled to the border with the Problem Solvers Caucus, a bipartisan congressional group, and he has urged top Biden administration officials to come to the region.

“We’re conservative Democrats down here,” he said. “We support a lot of international trade, we’re an agricultural community, we’re Catholic, we work in the oil fields, we’re avid gun collectors.”

“We are Republican, but what we really like is what Trump promotes,” Laureano Chileuitt, the group’s leader, said. A physician, Chileuitt practiced neurosurgery in his native Colombia until he came to the U.S. in 2001.

“That’s why we consider him our caudillo,” Chileuitt said, using the Spanish word for strongman. While the term has a negative connotation in the U.S., it doesn’t for Chileuitt. “It just means he’s ‘the leader,’ like Uribe,” he said, referring to Álvaro Uribe, the right-wing former president of Colombia. “We are anti-globalization and anti-communism.”

NBC News spoke to Geraldo L. Cadava, who authored the book The Hispanic Republican: The Shaping of an American Political Identity, from Nixon to Trump.

Cadava wrote the book to explain why Hispanics lean towards Republicans. You know, because God forbid non-white people don’t toe the line:

It is instructive, Cadava believes, to acknowledge the GOP’s decades-long efforts to cultivate Hispanics. From 1972 to 1992, he posits, the Republican Party was more hospitable to Latinos than it was from 1992 to 2012.

And the loyalty created in the past has proved enduring. Because some Latinos have been voting Republican their entire lives, they will not necessarily abandon their party even amid criticism of Trump for espousing xenophobia and racism.

“Decades ago, Hispanic Republicans voted for the man, like Reagan or Bush, not the party,” Cadava said. “Now that script has flipped. Hispanic Republicans support the party, which they believe in, even if they don’t love the man. Either way, the GOP retains a crucial bloc of support from what will be the largest ethnic minority group in the 2020 election.”

It’s not just the Rio Grande Valley. A 19-year-old Hispanic man with the enthusiastic backing of the Kerr County Republican Women defeated a liberal woman in Kerrville, Texas for a city council seat. It’s a start.

Immigrants are often the most perplexed by all of the woke BS. It is alien to them. No one in Mexico talks about 26 genders, reparations and hate America propaganda. They also distrust government.

Trump won 38% of Hispanics. That surprised many Democrats.

So, there is potential – but its an uphill battle.
>> Another way to look at it is that Trump lost 62% of Hispanics.

Yes, that’s true, but what is important is the trend over time. How does 38% compare with last couple of outings? And has the share increased over that period?

Now, let’s get rid of the scum infesting the GOP:

Hispanics are NOT a Race. They are an Ethnicity. Like Jews, Arabs, Armenians, etc.

Hispania is the Iberian Peninsula and consists of 3 Countries, Spain, Portugal, and Andorra; and one Territory of the UK, Gibraltar. All of which are very WHITE Countries whose populations would be INSULTED if you called them People of Color.

They don’t like to be called LATINX?
You don’t say.

This is my major thesis:
1. Get past Trump and the pctg of his message/supporters that are/were xenophobic (not as large as the msm would have you believe)
2. Welcome and support liberty-loving, wealth-oriented, individual-rights-supporters of every color and gender. Young Kim, Tim Scott, etc. etc. We are a rainbow too (and watch the race-baiting SJW, leftists cringe as they try to continue to demonize “Trump supporters”).
3. Welcome Joe Manchin into the party and re-claim the majority in the Senate.
4. Take back the House in 2022.

Manchin is not going to switch parties in a 50-50 Senate. He’s the chairman of the Energy and Natural Resources Committee right now. If he voluntarily left the Democrats to join the GOP, even if it was just caucusing with them in order to get committee assignments, Sen. Barrasso (R-WY) would become the chairman unless the GOP caucus agreed to put Manchin in that spot and Sen. Barrasso agreed to step aside.

Manchin has a heckuva lot more pull these days than he ever would if he walked across the aisle by his own decision.

Actually, he’d have about the same power whether he has an R after his name or a D. Because the Senate is basically divided 50-50, he will be the swing vote either way. As the swing vote – he is able to demand a lot.

He would be smart to switch parties. (1)The Dems hate him for holding up their power-grabbing agenda and they will continue to smear him. They are nasty. Their nasty rhetoric may cause him to leave. (2) Congress is very likely to flip to R in 2022. So he will then be in the minority again and have very little power. He cannot serve constituents well from the minority party in Congress So, if he wants to do right by the people of WV, he should become a R.

Here’s the problem with that, because 51-49 can become 50-50 with Harris being the deciding factor once again: There are 5 states in which one or both of the senators are GOP, the governor is a Democrat, and there is no need to consider party affiliation when appointing an interim replacement: Kansas, Kentucky, Louisiana, Maine, and Pennsylvania. Heaven forbid anything happen to any of them, but he’d be irrelevant sitting on the GOP side of the aisle if something happened.

The Senate flipped majorities something like 3 times in 2 years in the early 2000s because of deaths and party switches. Manchin knows this. If he voluntarily leaves the Dems I highly doubt he would be welcomed back, and it’s entirely possible he may very well end up in the minority again due to some unforeseen circumstance.

The Mayor Pro-Tem of Pearland was re-elected. Congrats Adrian Hernandez.

All this comes as no surprise to me. The Texas GOP has done a far better job in bringing Hispanics into the party than the California GOP, and it shows.

But let’s not forget either–they’re still Texans and not Californians:

Being from South Texas, and being Latino, I can honestly say that the vast majority of people I know don’t even know how they would pronounce “Latinx”. Is it “Lat-inks”, “Latinz”, WHAT? Spanish, Portuguese and other related languages have very strong male/female noun structures with a few exceptions. Changing the languages to make them “genderless” is absurd, and it is one way to anger large ethnic segments very easily. Don’t mess with the triad of family/faith/language in South Texas. You’re only asking for trouble.