“whole thing is doomed from the start” 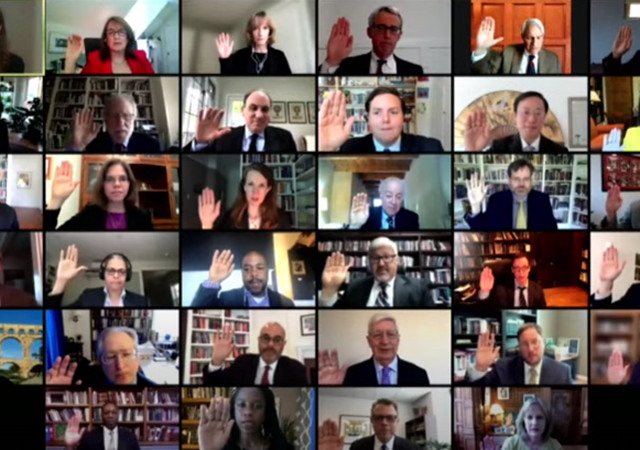 Joe Biden’s ‘Supreme Court Commission’ held its first meeting this week. Democrats and the media are selling it as a commission to study reform, but we all know this is just the Biden administration’s way of testing the waters on packing the court with progressive justices.

Note how the story is framed in this report from Reuters:

President Joe Biden’s commission to study potential changes to the U.S. Supreme Court held its first meeting on Wednesday and will have six months to issue a report on reforms including possibly expanding the number of justices, an idea touted by some liberal activists and Democratic lawmakers.

“We definitely have our work cut out for us,” commission co-chair Cristina Rodriguez said at the end of the virtual meeting that lasted less than half an hour.

Rodriguez, a Yale Law School professor who served in the U.S. Justice Department under Democratic former President Barack Obama, said the 36-member bipartisan commission will not provide recommendations but rather evaluate the “merits and legality” of specific reform proposals.

The other co-chair is Bob Bauer of New York University School of Law, who served as White House counsel under Obama.

So both the chair and the co-chair are holdovers from the Obama administration. Sounds perfectly fair and balanced, doesn’t it?

A former aide to failed presidential candidate Hillary Clinton called for packing the Supreme Court and said President Biden’s commission to explore that possibility is “doomed from the start.”

Biden’s Supreme Court commission, which has its first meeting Wednesday, will eventually produce a report on possible changes to the court, including expanding the number of seats.

But Brian Fallon, the executive director of liberal dark money group Demand Justice, says he isn’t holding his breath about what the commission will say.

“It’s not even on my calendar, because I don’t care,” Fallon, a former Clinton aide, told Politico on Monday.

Fallon, who also served in the Obama administration as a spokesman at the Department of Justice, added that there wasn’t a thing the commission would do that was “going to impress” him and added that he believes the “whole thing is doomed from the start.”

“We oughta have a Black woman on the damn court to hear a case like this,” Fallon also said, in reference to the Mississippi abortion case taken up by the Supreme Court on Monday.

The video I used for the featured image is boring and not worth sharing, but I took another screen capture that shows what a hit this is with the public. Take a look at the view count on this video. A whopping 1,400 people have watched this. Also, take note of the thumbs down, which vastly outnumber the thumbs up, and finally, the ‘comments are turned off’ notice at the bottom. We can’t have the pesky public weighing in on this. 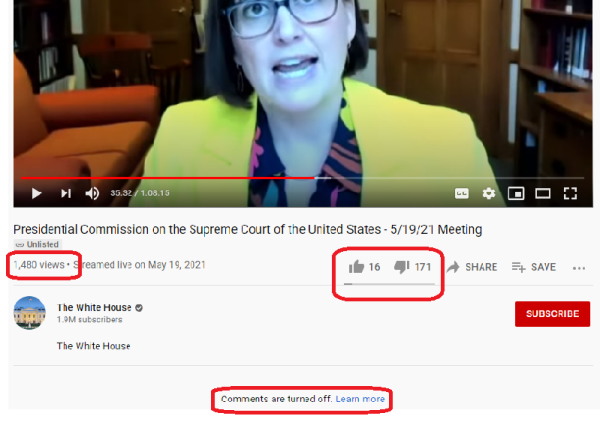 ;I know don’t know if they will eventually pack the Supreme Court or not, but I am pretty sure they packed the Commission that is looking into it. They already know what the commission will recommend or they wouldn’t have convened it.

A black woman hearing an abortion case might not vote the way Fallon assumes.

Echoes of Justice Thomas, conservative American: Pro-Life, Liberty, and the pursuit of Happiness, without diversity, inequity, and exclusion, extraordinaire. That said, the disparate sacrifice for social progress is visible and undeniable. Feminists and masculinists, beware.

If she doesn’t vote the way Fallon demands then she ain’t really Black is she?

Then we oughta just have a Blue woman on the Court.
I really love that photo.

“We oughta have a Black woman on the damn court to hear a case like this,” Fallon also said, in reference to the Mississippi abortion case taken up by the Supreme Court on Monday.

an Obama judge , I presume

Precisely. Depending on whose figures you use, black females comprise about 14% of the childbearing population yet account for at least 36% of total abortions.

Jeez, the Klan couldn’t have come up with a better way of eradicating entire generations of black children.

Conservatives are the people hellbent on preserving the lives of black infants, and extending the ordinary citizens’ rights of peaceful enjoyment of property to black neighborhoods.

According to Democrats, this makes them racist.

Yes, Pro-Life, Liberty, and the pursuit of Happiness.

That said, I am, and I think there is a conservative, and likely majority, consensus, pro-choice: abstention, prevention, adoption, or compassion, with a deep-seated prejudice for the last. That said, we are not children anymore, sex is not a mystery, conception is probable, and both women and men have the dignity and agency to acknowledge, commit, and reconcile.

Seems rather hilarious that the White House Youtube® account has 1.9 million subscribers but could only get a grand total of 1,582 views/16 thumbs up/175 thumbs down. You would have thought all those bot accounts would have actually viewed the video stream and upvoted it and given it better numbers. But nope, didn’t happen. Makes one wonder if 80 million people actually voted for Biden. But that’s a whole ‘nother barrel of monkeys.

Not surprising though, most of the Biden regime’s video streams and the like are PR disasters that nobody cares about nor watches.

(And I don’t know if it was this way before but now the video page is labeled as “Unlisted” for some reason. Could it be that the White House PR hacks are actually embarrassed they are now hiding it from the search results and viewers?)

Hey Brian, Obama had a chance to appoint a black female to the court yet he never nominated one, even the one that Mitch passed on going through the process wasn’t a female or black. Why don’t you direct your concerns to him.

Brian Fallon, the archetype for the DC sluts that now run our country, Ivy League indoctrinated, directly employed by Leftist politicians, Married to a like thinking fellow traveler, both with their noses turned up at the scruffy Americans ( Deplorables) who get their hands dirty at work.
He, of the self-nominated elite. !
He and is ilk need to be canceled and replaced with Joe the plumber
My 2 cents.