The White House cited a scheduling conflict, but Biden spent the weekend at Camp David. 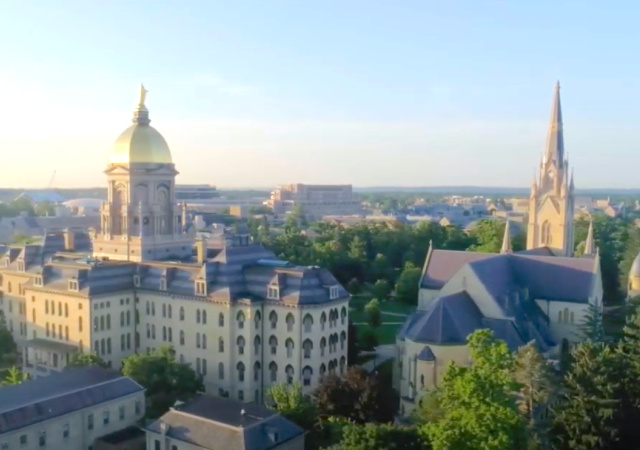 Notre Dame said it invited Biden. The White House said Biden did not attend because of a scheduling conflict.

Biden spent the weekend with the First Lady at Camp David.

Biden broke with recent tradition and didn’t speak at Notre Dame’s commencement today. There had been outrage over his pro-abortion policies.

The White House said it was a “scheduling conflict.”

Below is Biden’s schedule for the weekend. Where’s the conflict? pic.twitter.com/IcTA09TkpV

Notre Dame President Fr. John Jenkins received an open letter signed by 4300 people urging him not to invite Biden due to his policies on abortion:

In brief, to begin with abortion, Biden’s actions already taken and those promised will result in the killing of countless innocent unborn both here and abroad through federal funding of abortions and abortion organizations.

This is not hyperbole. It is demonstrable fact because of Biden’s lifting the bar against the flow of federal funds to both domestic and international Planned Parenthood and similar organizations. The calamity will assume truly harrowing proportions if Biden achieves his goal of providing direct federal funding of abortions.

In terms of Notre Dame’s honoring Biden, matters are made still worse by Biden’s repeated profession of his Catholicism, and one who, as you have acknowledged, believes abortion to be morally wrong.

The letter also mentioned Biden’s policies on sex, marriage, and gender not aligning with Catholic teaching.

Notre Dame came under fire in 2009 when President Barack Obama gave the address and acquired an honorary law degree:

Obama’s address in 2009 drew controversy due to his ardent support of legal abortion. Bishop Thomas Olmstead of Phoenix sent a letter to Notre Dame’s president Fr. John Jenkins, CSC, saying that the invitation of Obama to speak and receive an honorary law degree at Notre Dame’s commencement is a violation of the USCCB’s 2004 statement “Catholics in Political Life.”

Bishop John M. D’Arcy, who served as the bishop of Fort Wayne-South Bend until his retirement in November 2009, issued a statement at the time that Jenkins gave a “flawed justification” for the university’s commencement invitation to President Obama, and should have consulted with his bishop before extending the invitation.

It’s tradition for presidents or vice-presidents to speak at the Notre Dame commencement. It doesn’t always happen, though:

Dwight Eisenhower and George H.W. Bush gave their addresses in the last year of their administrations.

Egocentric like most politicians. And they called Trump self-absorbed. Difference is, Biden mastered the art of subterfuge.

Nope. He’s too far gone. It’s his crazy wife Jill who is running the show – at least from the standpoint of how much power Biden actually has, in comparision to de factor presidents Susan Rice and Anita Dunn.

Jill Biden is a yenta and kibbizter on the level of Hilllary Clinton.

My son graduated from ND. Thank goodness Biden did not show or send Harris in his place….I cannot imagine being a parent and having to listen to either one of them tell us what it means to be Catholic at the graduation ceremony.

Or maybe his handlers decided to make up an excuse because this would have been a very high-profile speech with a great deal of media coverage and they were worried he’d go off the prepared text? If the WH had agreed to it that would have been weeks or months ago.

Since there’s a schedule among the service academies for commencement addresses it was the year for POTUS to go to the Coast Guard Academy; IMO, more eyebrows would have been raised had that been declined due to a “scheduling conflict”. And look what happened.

JFK addressed a ND commencement ceremony when he was a congressman.

Maybe Biden was having a bad day, too busy chasing his lost marbles?

You are assuming he knows he’s lost them.

He couldn’t care less. If nothing else, Biden knows he’s completely invincible to any consequences of his corruption or treason. Hillary Clinton learned that too, but she’s too stupid and obnoxious to learn how to slide past it all like Biden.

Biden says he has a good excuse. He says he works out every morning with dumbbells and doesn’t have time for non-essential things like addressing Notre Dame.

Maybe he will send Harris if she’s not too busy.

Harris is too busy trying to come up with excuses for not going to the border.

She’s a whirlwind isn’t she?

That clown Harris is hiding like her life depends on it.

“He says he works out every morning with dumbbells…”

Is he talking about his staff?

“He says he works out every morning with dumbbells….”

I think we all know why he didn’t attend. With each passing day he has fewer moments of lucidity, and his handlers probably believe that his moments of lucidity can be stored up for future use like unused minutes on a cell phone plan.