“You are, you’re a really dull class. Come on, man. Is the sun getting to ya? I would think you’d have an opportunity when I say that about the Navy to clap.” 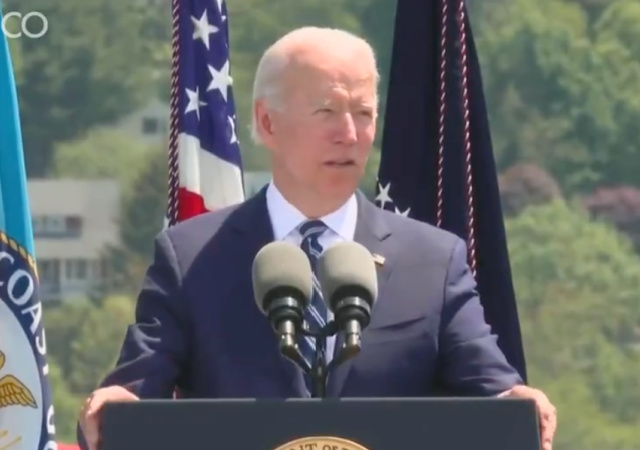 Biden and his handlers didn’t even come up with the gag. Vice President Dick Cheney told the joke to the Coast Guard graduating class in 2008.

Biden has his "please clap" moment after making a wisecrack about the Navy at the Coast Guard Academy.

"You're a really dull class. Come on, man. Is the sun getting to ya?" pic.twitter.com/9NIUa6yjju

BIDEN: "The Coast Guard is 'the hard nucleus around the Navy, forms in times of war.' You are, you're a really dull class. Come on, man. Is the sun getting to ya? I would think you'd have an opportunity when I say that about the Navy to clap." pic.twitter.com/udfXQ33bb9

“I can only assume that you will enjoy educating your family about how the Coast Guard is, quote, the hard nucleus around the Navy forms in time of war.”

lmaooo, appears Biden botched the joke Cheney repeated in 2008. The actual punchline is:

“There’s a saying in your line of work — that the U.S. Coast Guard is the ‘hard nucleus about which the Navy forms in time of war.'”

Not stolen, stop discouraging people from voting. PA just had a record turnout so hopefully Republicans in other states follow the (just triumphant) Republicans in PA and tune out this “don’t vote” stuff.

PA-Campaign on local issues none of the stolen election stuff was in the campaign against permanent emergency powers
GA-Campaign was that GA was stolen (which meant don’t vote) and predictably Republicans didn’t vote and we lost both senate races.

And… Stolen Elections Have Consequences.

To the corrupt, theft, fraud, and lies are simply a means to an end and therefore “good.”

They lost in GA because the Democrats did EXACTLY the same fraud bullshit they did the first time – stopped counting in Atlanta for hours, waited to see how many votes were needed, then did a late vote dump that magically put both Democrats over the top. They lost because the stupid RINOs in the state government refused to do ANYTHING to secure the vote and let them cheat both R’s out of office.

That explains why nobody alleged that in court for either election, and both Perdue and Loeffler admit they lost.

R’s can win in 2022 if they/we encourage everyone to vote . . .ESPECIALLY independents who are justifiably scared of a) Biden’s incompetence, b) radical shift of DemoLib’s pushed on by the squadrettes. All races want a great economy, increasing demand for jobs (not handouts), moderate taxes for those who make less than $400k, R’s can win easily.

Trump is done. Time to move on.

What else do you call a stolen election. No honest person believes that dementia-ridden, retarded pedophile actually won honestly.

So do badly stolen jokes.

Biden went into politics to steal, he spawned more thieves, and the Biden crime syndicate profited handsomely, When one looks at Biden’;s pattern of criminal activity, we should not be surprised than he conspited to steal an election. In fact, he had to steal the election to avoid ending up in prison.

You’re telling me that Biden stole material from someone else? C’mon, man, that can’t be true.

He did say “quote.”
Of course, he couldn’t admit he was (mis)quoting a Republican.

What a buffoon.
An insulting moron.

In the Words of the Oscar Winning Rabbit: “What a Maroon.”

It’s no wonder. He’s been in Toontown 46 years.

Also taking credit for other’s work.
>> like the vaccine.

MLK also plagiarized stuff, but I think, that unlike current black activists/con artists, that he meant well

But the legacy media assured me that Biden wasn’t involved in any plagiarizing…..

You have to look at it from Joe’s standpoint. He had just been told he was president of the United States and had to read something important off the teleprompter. He didn’t know where he was at, what he was reading, or who he was speaking to—-nor could he remember later what happened earlier in the day.

“My granddaddy was mean dude. His was called Corn Pop and have corn rowed hair and a gold grill on his teeth. He carried a razor blade and was a coal minor, And one day grandpappy Corn Pop accosted me in a parking lot in a mean racial jungle in Philadelphia where I worked as a life guard protecting black children from white supremacists. You should have seem me. I was bronzed and tanned, and lean and muscular. I used to have the little black children sit on my lap and stoke the hair on my masculine legs while I sniffed their hair. Those were the days when all of America was united. But Corn Pop, who had just gotten off from a shift down in the mines, came at me with his razor when I was going home after saving a bunch of black kids and getting being given the Nobel Prize for honesty and integrity. But grandpa came after me with his razor and I pulled out my chain which I carried with me, and there we were face-to-face in the parking lot, and said, grand daddy Corn Pop, why don’t we just work this out! C;mon, man! And he saw I was right, and put away his razor blade, and then we walked in the racial jungle, hand-in-hand, and me and Harry Bird, my good friend and Exalted Cyclopes of the Ku Klux Clan, and grandpa Corn Pop built the house my daddy was born in…. C’mon man. That was a joke. I couldn’t have built the house my daddy was born in! You guys are dull.

That was awesome . . . like leaving those razors in the rain barrel so they’d rust. And then listening at night to the record player . . . you dog-faced pony soldiers!

I like a good joke as much as the next guy, but HUH?

Perhaps the cadets were taught: “If you can’t say something nice, don’t say anything at all”.

Imagine if Trump had done this…

If I recall correctly Trump got standing ovations at the service academies, and shook the hand of every graduate at most of them.

I don’t understand it. This joke killed in the White House basement.

He shoulda brought the canned laughter from the basement with him. It woulda been a killer.

Slow Joe has been plagiarizing speeches for over 40 years. Ask Neal Kinnock.

Don’t forget is “stupid bastards” remark to U.S. Military personnel on March 7, 2016 at a military base in Abu Dhabi, United Arab Emirates.

It sounds okay to me with the exception of screwing up the joke in the first place. He’s not insulting hem but taking a moment to speak informally to them about scripts and expectations. It’s a frame break in the frame of a lecture.

Never interfere with a Democrat’s scripted non-reality. Got it.

The Biden people will be looking hard at all the cadets’ social media accounts because these guys are obviously all white nationalist terrorist plants.

The must be White Supremacists if they decline to laugh at the dear leader’s jokes.

Reviewing social media posts – how “Big Brother” of them.

They’re going to start setting up one of those screens for LAUGHTER, APPLAUSE, STANDING OVATION off-screen, aren’t they.

But for heaven sake, not in Joe’s line of sight, or he’ll read them out loud.

With dog collars on the audience.

Next time they don’t laugh,, their military careers will be over. They will be smeared as extremists and blocked from getting jobs, etc. for the rest of their lives.

Tired, old, worn out, mentally impaired Alzheimer patient calls bright, young Coast Guard cadets dull when every single one of them have minds 10 times sharper than his.

I blame Trump. I’m sure he must have ordered them not to laugh at Biden’s jokes.

When I was at NAS Memphis in Avionics school before sailing off to Vietnam I had a Coastie in the bunk above me.

Nice enough guy but I guarantee you he never went to the Gulf of Tonkin!

lots of Coasties went to Nam, as i understand things.

Xiden can’t deliver a punch line, much less understand CG / Navy rivalry. I was trying to think of something pithy, but in the end Xiden is a “dick” pure and simple.

The letter on White House stationary placed in their 201 files will be a killer for those who had been planning a career in the Coast Guard.

Coasties were in Nam. We trained at the same Navy schools, and honestly a lot of them worked much harder at it than did we. It has to be more than a little disturbing to realize that your chosen career path is now controlled by the likes of *Xiden. I wouldn’t be too quick to cheer either. They are probably sitting there in the hot sun thinking he can put his critical race agenda, for the military, where the sun doesn’t shine.