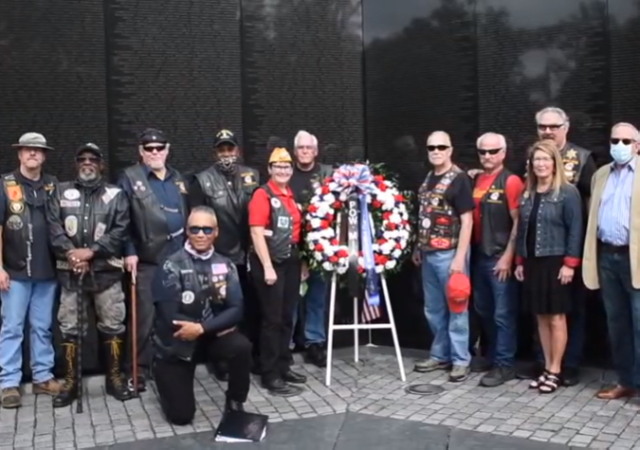 Rolling to Remember is a group and an event, formerly known as Rolling Thunder. It’s made up of American veterans who ride their motorcycles into Washington, DC every year to remember their fallen, POW, and MIA brothers and sisters.

The event is a tradition that has been going on for years, but this year has hit a roadblock. The Biden administration has denied their permit.

The Biden administration denied event permits for the Rolling to Remember motorcycle ride held every year for the past 30 years in Washington, D.C., prompting outrage in Congress.

The charity event, formerly known as Rolling Thunder, is a Memorial Day hallmark in the city, bringing scores of veterans and others to the area to commemorate war veterans, including prisoners of war and those missing in action.

The event was jeopardized at the last moment after the Pentagon declined to issue a permit allowing the group to gather in its parking lot, citing restrictions associated with the ongoing coronavirus pandemic. Biden administration officials “refused to talk with event organizers” and “refused to respond to Congress about this topic,” according to Rep. Darrel Issa (R., Calif.), who was one of several members to petition the Pentagon in April to approve the event.

The Pentagon approved the permit in March and then rescinded the decision this week without any explanation, according to Issa and Rep. Ken Calvert (R., Calif.), who also criticized the Biden administration’s decision.

Here’s a video of organizers announcing the 2021 event back in September of 2020:

Stars and Stripes reported that the group is heading to Washington anyway. But the group doesn’t know where all the participants will gather once they are there:

The Defense Department rejected a request from organizers of a traditional Memorial Day weekend motorcycle ride in the nation’s capital, throwing logistics of the event into uncertainty just weeks before it is scheduled to take place.

Motorcyclists typically use the Pentagon’s parking lot as a staging area for the ride, but defense officials denied the permit application Friday for this year’s event. Officials cited the ongoing coronavirus pandemic and the size of the expected crowd as the reason.

Despite the denial, thousands of motorcyclists are planning to gather in Washington during Memorial Day weekend. As of Monday, organizers didn’t know where to gather the riders before and after they drive along the National Mall.

Joe Chenelly, who is the national executive director of AMVETS, the sponsor of the ride, says the government ignored them for months before the Pentagon delivered the decision:

“The biggest disappointment in the Pentagon’s denial was that AMVETS was ignored for months as its professional staff in Washington requested numerous times an opportunity to hear the Defense Department’s concerns and present a [coronavirus] safety plan,” Jan Brown, the national commander of AMVETS, said in a statement.

For the sake of contrast, here is President Trump honoring Rolling to Remember at the White House in 2020:

I can’t help but wonder if these veterans are being punished for having many Trump supporters among their ranks. As deeply cynical as that would be, I wouldn’t put it past the Democrats in charge of Washington right now.

If they went ahead and held it, they can expect to be arrested and held for months without charges (see: January 6 “insurrectionists”). And media reports would breathlessly inform us that once again the Biden* administration has saved the nation from the fell clutches of “white supremacists”.

Yes, Ashli Babbitt was murdered. Others assembled are hunted and judged, held on disparate bail terms, in order to intimidate the community and force them to take a knee or be cancelled. With an effective military junta in DC, led by the nominal commander in chief, there is a credible risk if the event is deemed to be politically congruent (e.g. leverage, convenience).

Tickets for shows will go on sale beginning Thursday, the governor said during a press briefing in Manhattan.

The Communists are taking over, not much can be done now.

Oh, plenty can be done, it’s just finding enough with the balls to do it

And, this group might just be the bunch to do it. There is a T-shirt with something like: “don’t F with old people, life in prison isn’t that scary.”

I don’t think DC could do much to stop them riding, but finding a venue to assemble is another kettle of fish.

Just ride from one DC monument to another causing gridlock. Have a full tank of fuel, a couple gallons of water, and food for the road. The National Guard will ignore any order coming down about anything to do with Veterans. The Guard may even block DC police from doing anything.

And light up the drag pipes

Rename the ride “the Million Muslim Motorcycle March,” and, you’d no doubt discover that DoD will issue a permit with total alacrity.

Pure SPITE and showing his TRUE COLORS! IMPOTUS joe and harris are the most disgusting pair to ever hold the offices and with the recent stench of the POS oblama and biden, that’s saying a LOT!

I think they should make a plan to roar into DC in time to really screw up the holiday traffic when everyone in gov is racing to get away.
Imagine the ones who have flight reservations watching the planes fly off as they sit in traffic behind miles and miles of motorcycles. Or the ones who have ocean front homes or rented cottages being tied up in traffic an extra 4 or 5 hours.
I’d laugh.

You are describing exactly what happened for may Memorial Day weekends. They come in on Thursday or Friday and spend a long weekend swarming the local roads with large bands of motorcycles that do not have good mufflers.

Every biker should chat up a friendly trucker. Then they should all show up.

According to local legend, the Potomac River bridges can have a weirdly Bermuda Triangle-ish effect on big-rig powertrains.

Anyone here old enough to remember this?
https://www.youtube.com/watch?v=Sd5ZLJWQmss

There over 10 Public Rest / Comfort Stop areas in the greater Washington D.C. area. There is no reservations required. Coordinated according to where you are coming from, it would be possible to join up together on any “public” road designated. It could still be very doable.

“I can’t help but wonder if these veterans are being punished for having many Trump supporters among their ranks.”

If they were commies the permit would be granted and they would get an escort into DC were they could peacefully protest. After they create destruction and havoc the city would pay them for having done so.