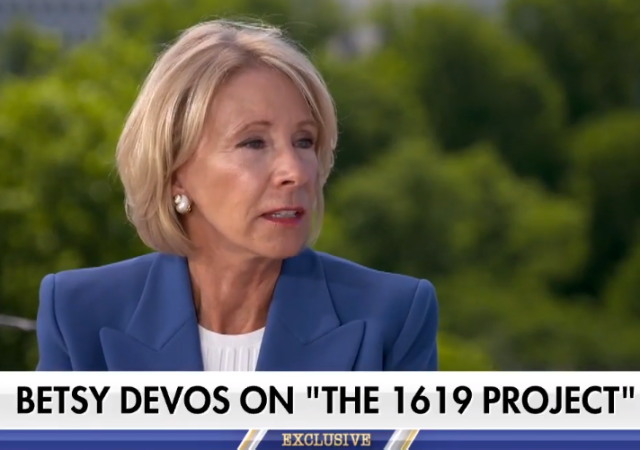 Nikole Hannah-Jones, the author of the 1619 Project, wants it taught in schools. She recently claimed it was a free speech issue.

Former education secretary Betsy DeVos was asked about this in an interview this week and spoke frankly.

Weingarten defended the project in a tense exchange with “The Story” host Martha MacCallum a day earlier, where she stated that “from everything that I can see and understand from the data that I see, 1619 was the year that the first slave boat came from Africa to the United States.”

The project is based on the belief that the first importation of the slaves to American shores in 1619 constituted the nation’s true founding, and suggests “that the reason for the founding of our country was to perpetuate slavery,” DeVos said.

“Let’s be really clear. The 1619 Project is not history… it denies 1776 and our constitution and our founding documents and the goal of forming a more perfect union,” the Trump education secretary said…

“Of course we need to teach history. We need to teach about slavery,” she said, “but we also need to teach how our country has continued to aspire for and work toward a more perfect union. And the answer to racism and discrimination in our country is not to then adopt another form of racism, which is exactly what the 1619 Project suggests.”

In the same interview, DeVos took a swipe at teacher unions.

Former Secretary of Education Betsy DeVos joined The Story with Martha MacCallum Tuesday to sound off on extended school closures and respond to Monday’s remarks by president of the American Federation of Teachers Randi Weingarten.

In a Monday interview with MacCallum, Weingarten tried to blame the Trump administration for months of extended school closures and distance learning in the name of COVID safety. DeVos responded on Tuesday, calling Weingarten’s attempt to pass the buck “an outright lie,” adding the Trump administration “knew last spring that it was safe for kids to be back in school.”

DeVos didn’t mince words when it came to evaluating the state of play for America’s students through the beginning of the Biden administration:

“We have failed kids across this country. I worry for the future of the country when this is how we’re treating the most valuable asset we have, our children, they’re our future. It’s just been heartbreaking to hear some of these stories, to see some of these things first hand. There is no excuse.”

The more the 1619 Project is examined and exposed, the sooner it will be history.

If The Clinton Foundation becomes involved, it’ll be renamed the 69 Project.

It is to Big Brother Biden, Comrade Harris and their Ministry of Truth — AKA DoE/DOJ/FBI/CIA/DNC/NYT/WaPo/CNN/MSNBC/ABC/CBS/Politico/Facebook/Twitter/Etc.

Big Brother Biden Comrade Harris are mere puppets. With Biden, his act is so honed, he’s more slippery, But Harris? What a rank amateur. She will become the dumbest president in US history, at the worst possible time in US history.

The Agenda-Media will destroy her for speaking the truth.
> All criticism and opposition must be destroyed.

Dems are like the Borg on Star Wars.
> Assimilate with the Borg (aka “Unity”) – “Resistance is Futile”
This should be the Dem/ Woke slogan

Trump made some good choices and some bad choices for his cabinet and top advisers. Betsy DeVos was one of the best. Unlike most of the education establishment, DeVos was not controlled by the teachers’ unions.

Unfortunately, some of the social studies majors are already indoctrinated into left-wing politics in their major courses without the Ed school having to do it.

It bears repeating: no one – and I mean no one – outside of the inner swamp knew or imagined its depth and the epidemic of corruption and treason inside our government. As an outsider, Trump could not have known it.

The fact the man got done what he did while under constant attack from the most sinister of forces inside our government and political system marks PDJT as a true genius, with the fortitiude of a repeat Medal of Honor recipient.

Caught part of an interview with the author of the forthcoming book “1620” which responds to this bogus Project. The actual history is that a pirate ship raided a Spanish slaver in the Caribbean, making off with a bunch of African captives; the pirates stopped off on various Caribbean islands and sold most of them, but had seven left. The pirates (not a slave ship) sailed up the river to the settlement where the last seven captives were put ashore.

They NEVER became chattel slaves in America, like there were later in the southern colonies. Of these seven, five became indentured servants to the settlers, i.e., contracted to work for a certain period of time in exchange for food, clothing and shelter, at which time they would become freemen. The other two were not indentured (maybe too old? too young? – dunno), but were not enslaved nor sold.

The whole 1619 project is based on a total fabrication. It figures.

The most important question, whch no one seems to ask the lunatics pushing this malignant story: is there ANY buried treasure involved?

It’s even worse than that. In the decades before the revolution, the American colonies had repeatedly attempted to end slavery, only to be overruled by the British crown, which controlled the colonies. In 1767, the General Court (the legislative body) of Massachusetts passed a bill to completely abolish slavery. The king’s representative in MA, the governor, vetoed the bill. The same bill was passed again in 1768, and again the governor rejected it and dissolved the legislature. In 1771, Massachusetts tried again to abolish slavery, and again the governor rejected it. They tried again in 1773 and 1774, and like every other attempt, these efforts were rejected by the British crown. In the Virginia colony, in 1767 Arthur Lee called for the abolition of slavery in the House of Burgesses (the Virginia legislature), and suggested putting a heavy duty on the importation of slaves. His idea was not passed at that time, but it was introduced again in 1769 by Richard Henry Lee, and this time it passed. But as it had done in MA, the British crown, which controlled the VA colony, suspended the measure, as it was deemed hurtful to a major source of British revenue (tobacco). The VA Burgesses passed the measure again in 1774, only to be shot down by the British crown yet again.

In one of the early drafts of the Declaration of Independence, Thomas Jefferson had written a paragraph (which was later deleted at the request of some South Carolina plantation owners) which explicitly referred to the colonists’ anger at the British crown’s refusal to allow the colonies to abolish slavery. Here is what the excised paragraph said:

“He [the king] has waged cruel war against human nature itself, violating its most sacred rights of life and liberty in the persons of a distant people who never offended him, captivating & carrying them into slavery in another hemisphere or to incur miserable death in their transportation thither. This piratical warfare, the opprobrium of infidel powers, is the warfare of the Christian King of Great Britain. Determined to keep open a market where Men should be bought & sold, he has prostituted his negative for suppressing every legislative attempt to prohibit or restrain this execrable commerce…”

IOW, not only was the American Revolution NOT fought to perpetuate slavery in America, as the 1619 Project falsely claims, but the American colonists had repeatedly made legislative attempts to end slavery in America, only to have their efforts repeatedly overruled by the British crown, and the colonists were angry about it! Their anger was one of the reasons for the revolution against the British crown, as Thomas Jefferson himself wrote in that early draft of the Declaration of Independence.

Observer: In the decades before the revolution, the American colonies had repeatedly attempted to end slavery

Observer: His idea was not passed at that time, but it was introduced again in 1769 by Richard Henry Lee, and this time it passed.

The resolution only taxed foreign importation, but did not abolish slavery. Virginia made a lot of money by selling excess slaves to Georgia and the Carolinas.

Observer: but the American colonists had repeatedly made legislative attempts to end slavery in America

Perhaps the most relevant fact about 1619 is that in that year nobody in the world had any objections to slavery. The idea that slavery might be wrong had not yet occurred to anyone, not even the slaves. No slave wanted to abolish slavery; their dream was to win their freedom, become rich, and buy themselves some slaves.

For that idea of abolition to arise required specific developments in European Protestantism that had not yet happened but were about to. It was unlikely ever to arise in any other culture, particularly not in any African culture, which means those who think “cultural appropriation” is a bad thing, and who are not of European Protestant background, ought to reject it and ought not to benefit from it.

Milhouse: Perhaps the most relevant fact about 1619 is that in that year nobody in the world had any objections to slavery.

That isn’t quite accurate. For instance, slavery was abolished by Wang Mang in 1st century China (though reinstated after his assassination). Saint Gregory of Nyssa spoke out about slavery in the 4th century. In 1315, Louis X decreed that any any slave setting foot in France would be freed. While none of these efforts ended slavery—that would await the advent of globalization—they show that somebodies in the world had objections to slavery.

Another example of somebody in the world who had objections to slavery would be Emperor Charles V as expressed in the passage of the New Laws of 1543.

The New Laws were not in any way against slavery, they were against stealing. If you could show that your slaves were legitimately your property you could keep them.

None of those people were alive in 1619.

Milhouse: None of those people were alive in 1619.

Milhouse: The New Laws were not in any way against slavery, they were against stealing.

Ah. so they were just like the so-called “Assault weapons ban” — you could keep all the “assault weapons” you owned. as long as you wanted, you just couldn’t buy any new ones.
Big whoop.

henrybowman: you just couldn’t buy any new ones.

You couldn’t enslave free people. It was only a partial solution, but contradicts the claim that “the idea that slavery might be wrong had not yet occurred to anyone”.

The Left has been rewriting Western history since the end of WWII.