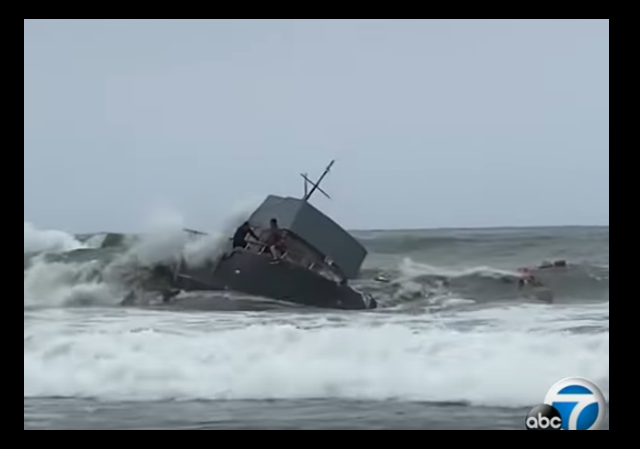 This weekend, a boat thought to be illegally smuggling humans into the country capsized off the coast of San Diego. The accident left three people dead and 27 others injured.

“Every indication from our perspective is that this was a smuggling vessel used to smuggle migrants into the United States illegally,” said Supervisory Border Patrol Agent Jeffery Stephenson.

Lifeguard Chief James Gartland said the maritime crash was likely “one of the bigger vessel accidents” the region has seen.

San Diego lifeguards initially got a report of a boat that appeared to be in trouble about 10 a.m. They were told the boat was drifting toward the shoreline, with one person on board, officials said.

It turned out the 40-foot cabin cruiser was packed with dozens of people.

The Coast Guard cut off its search for survivors on Monday:

Mexico’s Foreign Relations Secretary said Mexican passengers were being turned over to U.S. immigration authorities to be returned to Mexico.

According to a friend of mine who is very familiar with the area, the waters in that location can be treacherous (big rocks and even bigger waves). Authorities arrested the captain of the smuggling boat.

The suspected captain of the vessel’s name has not been released.

Brandon Tucker, CBP deputy director of air operations for the San Diego Air and Marine Branch, said the captain of the suspected smuggling boat is “a bit out of it, but he is speaking to agents on scene.”

This incident is just the most recent evidence that the magnitude of the Biden Border Catastrophe. Even Blue State senators are beginning to notice that the administration’s “Border Czar” is AWOL.

There were 172, 331 border encounters in March this year, which dwarfs any month during the Trump administration. And it was only Biden’s second full month as president.

Biden appointed Vice President Kamala Harris to be in charge of the new migrant crisis. Since her appointment, Harris has not been to the southern U.S. border, which has drawn expected heavy criticism from Republicans, but also from the left already.

Hawai’i Democratic Senator Mazie Hirono said the border and migrant scenarios are a “crisis,” and that the vice president should see it with her own eyes.

The situation at the southern border must be catastrophic if Hirono is calling out the Vice President for not at least visiting. Perhaps if someone told Harris about San Diego’s beautiful beaches, she might be inspired to come?

Why isn’t the media hanging this story around Biden’s neck as they would have done to Trump? (Rhetorical question)

Oh, you really are a newbie.
The media isn’t even reporting it was a boat full of illegals!
If it casts Democrat programs in a bad light, it won’t get reported.

Biden and Harris should have been aboard.

And now that they’ve made it to shore the “wet foot/dry foot” principal applies and they will be allowed to immediately enter the United States un-restricted by their illegal status.

Applies only to Cubans, thank heavens. But not that it matters anymore.