Shortage of fuel truck drivers, a “car rental apocalypse”, and a bottleneck in the chlorine gas supply signal a long, hot summer of discontent. 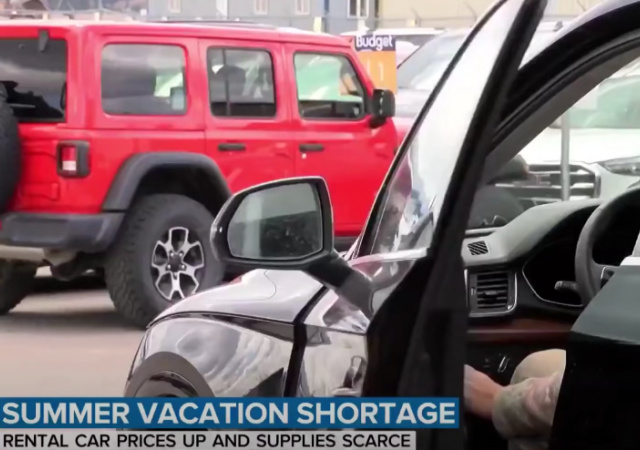 The effects of 2020’s Wuhan Virus pandemic have resulted in shortages that could impact American summer vacation plans.

While it looks like we averted the toilet paper crisis, National Tank Truck Carrier said the after-effects of pandemic closures have led to fuel truck driver shortages. If this situation is not resolved quickly, we might be in for fuel shortages and price increases.

In a more normal year, perhaps 10 percent of the country’s fuel tankers might be idle, but NTTC says that number is between 20–25 percent in 2021. “We’ve been dealing with a driver shortage for a while, but the pandemic took that issue and metastasized it,” Ryan Streblow, NTTC’s executive VP, told CNN.

Driving a tanker full of fuel requires more training than hauling bulk cargo in a class 8 truck, but the pandemic sidelined drivers as fuel demand dropped, causing many more drivers to leave the industry. And the schools that could train new drivers were obviously closed for public health reasons, compounding the labor shortage.

Even if Americans come upon fuel, many find it difficult to book rental cars during what is referred to as a “car-rental apocalypse.”

Travel is projected to boom this summer as the COVID-19 vaccine rollout and pent-up demand for travel continues to grow tangentially. As a result, car rental companies like Enterprise and Hertz previously told Insider that they have begun seeing strong demand for rental cars through the summertime.

However, this skyrocketing interest in rental cars — combined with decreased fleet sizes after several companies had to sell off chunks of their fleets in order to preserve money during COVID-19 — has created what some are calling a “car-rental apocalypse.”

If you’re planning your first vacation in over a year, you might want to look out for rental car prices. This “apocalypse” is causing popular travel destinations like Hawaii, Florida, Phoenix, Arizona, and Puerto Rico to see booked out fleets and rental-car prices up to over $700 a day. This has even pushed tourists headed to Hawaii to rent U-Hauls vans instead.

The massive rental-car shortage is causing vehicle rental companies to turn to car auctions to regrow the fleet quickly. Taking advantage of the new market opportunities, individuals are also renting out their second cars.

Finally, Americans who plan to avoid traveling entirely and enjoy their pools may also be out of luck. There is also a pandemic-related chlorine shortage.

The country is in the midst of a growing chlorine shortage. And that’s causing some pool supply stores to limit the amounts people can buy.

That could be a problem, since a lot of people added pools to their homes during the pandemic in lieu of a summer vacation. And a major chemical plant fire in Louisiana last August has created supply issues, as an estimated 800 tons of pool chlorine were lost.

That’s going to make it more expensive to keep pools clean. IHS Markit predicts chlorine prices could jump 70% this summer, after already doubling in some areas in the months following the fire at BioLab. The real effects of that fire haven’t been felt, as it took place right before Labor Day, when many pools close for the summer.

Fuel shortages. Inflation. Unemployment. This takes me back….

Anyone who is supposedly "confused," by my below tweet should probably read the awful Biden job report out today, then take a peek at the rising prices of raw materials that we're seeing and then finally google "Jimmy Carter inflation"….Things will make a lot more sense to you! https://t.co/ZJ6142EJIE pic.twitter.com/77bqHP2ubh

The fuel thing is likely. Fuel pricing is a shit show in the best of times. With people pent up to get out and have fun, demand will be over the top.

Remember- this is less than 6 months after our leaders went all in on electric vehicles.

Leave it to the morons at Twitter to mention the Nobel Prize.
The Nobel Committee :jumped the shark” a long time ago and have virtually no respect any more. Besides, when folks were paying 18% mortgages during the Carter Administration, Carter’s Nobel had no affect when they were trying to eat and not become homeless.

zI routinely worked with 26 Nobel laurates, none of them merited disrespect.., at least until Obama.

I think that Jimmy Carter is a decent person, that he was in over his head, and that many of his problems were swamp related. I do not have to agree with one’s politics anywhere near as much as I care about their character.

The beltway is very hard on people of good character.

Carter is not a decent person, except perhaps in comparison to 0bama. He’s about as decent as Biden or the Clintons.

He’s also an old-fashioned antisemite, from the long-ago days when that was standard for Protestants.

Apparently, the current lumber shortage has been a problem at least two years in the making. Starting with a pile of lumber misgraded in Europe.
The newest aspect, the prices have gotten so high that Russian lumber is now in play, with all of the layers of bribes required to get a sale.

Make sure your HO coverage has the endorsement for increased cost of rebuild. It’s cheap to get a few hundred thousand to cover boom pricing.

That jobs report last week was probably wrong. It is completely out of line with the ADP employment data suggests the actual number was more like 700,00o+ jobs. Although ADP is skewed to large employers, it still gets its numbers from payrolls rather than random sampling.

These government numbers have always been suspect. Just like the oil inventory reports that never agree. I believe they are shaping the curve to the political narrative that “requires” yet another multi-trillion dollar “bailout” bill.

A “bailout” bill that will further impoverish our grand children.
.

It is true they play games with the numbers, but when a D is in office, they usually fudge the numbers to not be so bad and quietly revise to true number the following month when it doesn’t make headlines….

There was no chlorine problem until the media said there was. I went to the pool store last weekend, oblivious to the panic because I don’t watch TV news, I read only sources I trust, which are few. The shelves that used to be bursting with buckets of chlorine tabs and powder were barren. I said – what on earth is going on? I was told what was going by the pool store guy. He said that they didn’t have a supply problem until it got on the news the day before and everyone freaked out.

I cannot stand what is happening in this country.

Just goes to show you how stupid people are. I’m amazed that so many still pay attention to the news.

I saw this posted someplace. It is a good one:

Hey I got robbed yesterday at the gas station.

Well when the police showed up I told them what happened!

When to buy a riding lawnmower. Went everywhere looking for them. Finally found one at a far away John Deer dealer. They had only one in stock and did not know when more would be coming in. No mulching kits or bagger kits. They are a Polaris dealer to, said they have zero items in for them and are not expecting more for awhile. Said it is really bad.

I’ve cut my acre of lawn with a scythe for 20 years. It’s a pleasant hobby, quiet, good exercise.

Not good if you have lots of posts or trees to cut around but otherwise very nice. There’s no efficient cutting pattern around a post.

Do you wear a black hooded robe while cutting your lawn?

You can’t have a shortage unless you have price controls.

There is also still a lifeguard shortage, since a good number of the summertime lifeguards who staff pools at places like apartment buildings and private pools come over from Eastern Europe. So it may not just be the chlorine issue that keeps pools closed this summer.

Honestly? Why can’t American kids sit next to a pool and tan while getting paid all day?

17 states in State of Emergency due to the pipeline cyber attack.
Gas shortage to aid in another summer of discontent?

My Local TV News station contacted the Electric Utility and asked them how much the pipeline blockage was going to drive up the monthly Utility Bills.

I am not making this up.

It would seem right in line with their avowed intent to do away with gas fueled vehicles to keep that pipeline shut down forever. If, of course, they want to “fuel” a lot more riots up and down the East Coast.

I say let’s leave the pipeline closed. The east coast is full of fossil fuel hating liberals, Now they can have their dreams come true and get rid of fossil fuels for the long hot summer and brag about what good little liberals they are while we toil away in our air conditioned homes.

Resisting in a blue state means staying on my grind, going to the gym, & self improvement. Don’t leave anything out for the lefties.

“Don’t leave anything out for the lefties.”

They are like locusts, and will just consume it on the spot.

Come to Detroit where the weak are killed and eaten!