Foundation for Individual Rights in Education on U. San Diego’s response that it will continue its investigation: “This response does not assuage our concerns; it compounds them.” 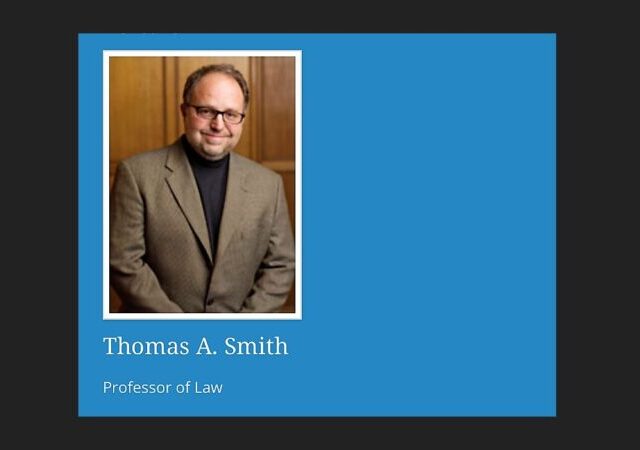 Thomas Smith is the ‘conservative’ law professor at University of San Diego Law School who has been targeted by student cry-bullies after he harshly criticized the Chinese government for its handling of the coronavirus and expressed his belief that the virus leaked from a Wuhan virology lab.

The students absurdly claimed that Prof. Smith was attacking Chinese people as an ethnicity rather than the Chinese government, and demanded his firing. Dean Robert Schapiro disgracefully denounced Prof. Smith, labeled his blog post an example of bias, and launched an investigation of Prof. Smith. (Exam question: Is it really a fair and impartial investigation where the head of the instituation already has declared it to be an act of bias before the investigation even started?)

This another example of the student mob mentality that is sweeping academia and almost always directed at right-of-center professors. In almost all of these cases, the pattern is the same: Students weaponize their hurt feelings to demand destruction of a professional career over political comments with which they disagree, exploiting administrative weakness by falsely claiming bias against the professor. In the face of such contrived bias claims, administrators crumble and publicly shame the professor through ritual denunciations, occasionally leading to actual employment termination.

It is reminscent of the worst days of the Maoist Cultural Revolution, in which students were the most aggressive in demanding ideological obedience from professors, with public shaming one of the tools used to humiliate the target and scare others into silence.

We followed up after the Foundation for Individual Rights in Education (FIRE) came to Prof. Smith’s defense, San Diego Law School “Must Immediately Cease Its Investigation” Into Prof. Thomas Smith Over China Criticism, Demands Free Speech Group. The FIRE’s letter provided, in part:

The faculty member in question made a political comment in forceful language. He has the right and perhaps the obligation as a citizen and an academic to comment on matters of public concern such as the Chinese government’s handling of COVID, and to do so in evocative and forceful language. No fair, much less lawyerly way of reading what he wrote would conclude anything other than that “Chinese cock swaddle” was referring to propaganda of the Chinese government and surely not denigrating people of Chinese origin or descent. The context makes this perfectly clear.

Blog posts by academics fall within the bounds of academic freedom as defined by the AAUP. Student concerns about discrimination should always be considered soberly. Yet, an academic institution committed to free inquiry cannot allow misplaced accusations of bigotry to become an all-purpose tool for silencing critical comment. To allow such accusations to undermine academic freedom ultimately ensures an environment of fear and suspicion for all members of the academic community, undermining rather than ensuring a welcoming and respectful discourse. Describing the disputed comments in this case as “offensive language in reference to people from China” of a piece with “hate crimes directed against the Asian and Pacific Islander (API) community [and] racist commentary” inevitably creates the impression that judgment has been rendered in advance and the outcome of the promised review has been predetermined.

The bad news: U. San Diego blew off the substance of the FIRE letter, and basically took a ‘don’t call us, we’ll call you’ type attitude.

The FIRE posted the email from the law school:

I write to acknowledge receipt of your letter dated March 22, 2021. I apologize for sending this to the general email address, but neither your letter nor the FIRE website provided your direct contact information.

We are reviewing the matter and expeditiously will take action as appropriate.

FIRE is disappointed not to have received a substantive response to our letter of March 22, 2021, concerning the University of San Diego Law’s investigation into Professor Thomas Smith. The cursory March 29 response stated that the university is “reviewing the matter andexpeditiously will take action as appropriate.”

This response does not assuage our concerns; it compounds them. Smith’s speech, however offensive others might find it, is squarely within the rights of faculty members to be free from institutional censorship due to their extramural expression, as recognized by USD’s adoption of the American Association of University Professors’ 1940 Statement of Principles on Academic Freedom. The only appropriate action for USD to take is to cease its investigation.

Again, USD’s initiation of an investigation on its own creates an impermissible chilling effect that does not comport with the free speech and academic freedom promises USD makes to its faculty. A commitment to “expeditiously” continue an investigation-some twenty-two days after the post-is a commitment to continue its violation of Smith’s rights.

We request receipt of a substantive response by the close of business on April 9, 2021.

The FIRE’s Sabrina Conza has a blog post at the FIRE about the ongoing harm:

USD Law’s investigation into Smith’s blog post has had a deleterious effect. Others have indicated that Smith’s silence in response to backlash to his post is indicative that Smith is not interested in hearing others’ perspectives on the issue. However, investigations cause a chilling effect on speech. Why would Smith, who is under investigation by the university for his speech, agree to continue speaking on the topic? This chilling effect not only inhibits Smith’s expressive rights, but also frustrates the ability of Smith’s critics to engage him in dialogue.

Esther Bylsma, the president-elect of the Pan Asian Lawyers of San Diego, spoke with San Diego’s ABC news affiliate about a letter the organization published. She criticized Smith’s “lack of” response to students who want to speak with him about his blog post, and how that demonstrates the “fallacy of the whole academic freedom argument.”

The problem with this theory, however, is that investigations like USD’s into plainly protected expression — no matter how disagreeable — chill speech.

When Smith’s job could be on the line because of his speech, why would he continue to speak or engage in debate with those who disagree with him? If a faculty member is being investigated because their online speech — not directed to students or faculty — is perceived as creating a hostile environment on campus, why would they rationally choose to engage with critical students or colleagues, thereby bringing the speech closer to the campus environment?

That chilling effect will not be limited to the investigated professor. How can other faculty feel comfortable speaking on uncomfortable topics if they know USD may investigate them for clearly protected speech?

These chilling effects are inimical to the purpose of a university, where students and faculty can share viewpoints that others might find uncomfortable or offensive. To alleviate this chilling effect and to comply with its promises, USD must immediately cease its investigation into Smith’s blog post and reaffirm to its faculty that it is committed to its promises of academic freedom and freedom of expression. FIRE will be watching to make sure it does so.

She’s right, the damage to free expression was done first when the students’ weaponized their emotions and twisted Prof. Smith’s words out of any legitimate context, and when Dean Schapiro threw Prof. Smith under the bus to placate the mob.

The issue is what happens next. Will U. San Diego do the right thing and live up to its contractual and legal obligations to protect academic freedom and free expression, or will it engage human sacrifice of a dissident professor.

My money is engage in human sacrifice of a dissident professor.

Does anyone know how much money the U of San Diego received from the Chinese government last year? Or do they keep that secret?

Hmm…I wonder which one they will choose.

Can anyone find Dean Schapiro’s condemnation of Hillary Clinton’s vilifying half of Americans as “deplorables”?

Nobody argues she was talking about the American government.

She was talking about approximately half of the American people.

Someone please find and post Dean Schapiro’s denunciation of Hillary Clinton’s bigoted disparagement of tens of millions of Americans.

“Dean Robert Schapiro disgracefully denounced Prof. Smith, labeled his blog post an example of bias, and launched an investigation of Prof. Smith.” If this is true, and Smith’s denunciations were indeed directed at the Chinese Communist Government rather than Chinese people as a whole, then I could imagine Schapiro circa 1938 in reacting to a professor who had said bad things about Adolf Hitler and the Nazi government: “You are biased against German people.”

Cornell Law School Dean Eduardo Penalver similarly used a Cornell dot edu web page to denounce Prof. Jacobson for what I see as accurate criticisms of the Black Lives Matter movement, but I noticed that this page has been taken down, for whatever reasons, and is now available only from archived sources. To be quite blunt, my opinion is the fact that it was published in the first place, and Cornell Law students and graduates called for action to be taken against Prof. Jacobson (while falsely accusing identifiable police officers of murder* and relying on the false narrative that Michael Brown had his hands up) is a good reason to direct prospective law students to the much less expensive SUNY system.

* The statement that certain named Black people were “murdered” is an accusation that the police involved committed a felony, and the police officers are identifiable by context. Kamala Harris and Elizabeth Warren, who are both attorneys and who should know better, also have done this.