“This is going to get people killed. And it’s going to create more vaccine hesitancy. These people don’t understand cost-benefit analysis. They keep making mistakes by orders of magnitude.” 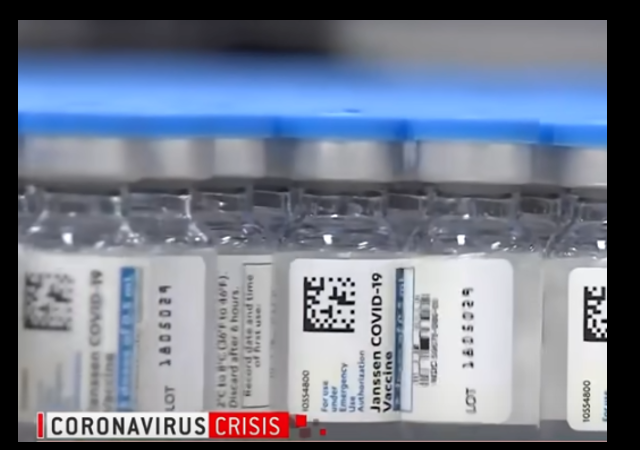 Federal health agencies are now calling for an immediate pause in the use of Johnson & Johnson’s COVID vaccine after six American recipients of the product developed blood clots within about two weeks of vaccination.

All six recipients were women between the ages of 18 and 48. One woman died and a second woman in Nebraska has been hospitalized in critical condition.

Nearly seven million people in the United States have received Johnson & Johnson shots so far, and roughly nine million more doses have been shipped out to the states, according to data from the Centers for Disease Control and Prevention.

“We are recommending a pause in the use of this vaccine out of an abundance of caution,” Dr. Peter Marks, director of the Food and Drug Administration’s Center for Biologics Evaluation and Research, and Dr. Anne Schuchat, principal deputy director of the C.D.C., said in a joint statement. “Right now, these adverse events appear to be extremely rare.”

The CDC’s Advisory Committee on Immunization Practices is meeting this week to discuss the six cases. The FDA has also launched an investigation into the cause of the clots and low platelet counts.

“Until that process is complete, we are recommending a pause in the use of this vaccine out of an abundance of caution,” Dr. Anne Schuchat, principal deputy director of the CDC, and Dr. Peter Marks, director of the FDA’s Center for Biologics Evaluation and Research, said in a joint statement.

They are recommending that people who were given the J&J vaccine who are experiencing severe headache, abdominal pain, leg pain, or shortness of breath within three weeks after receiving the shot contact their health care provider.

U.S. health authorities cautioned doctors against using a typical clot treatment, the blood-thinner heparin. “In this setting, administration of heparin may be dangerous and alternative treatments need to be given,” the FDA and CDC said.

States in the process of distributing the vaccine have been caught off guard. So far, Michigan, Mississippi, and New York have ceased the distribution of the one-shot vaccine.

There are also concerns about increasing “vaccine hesitancy” among those who have not yet received doses.

Tuesday’s announcement caught state officials already struggling to meet demand with scant supply off-guard and raised immediate concerns about how the move might make Americans hesitant to get the vaccine even unwilling to do so.

“Honestly, your note is the first I’ve heard of this,” the chief of staff for a southern governor told CBS News when contacted early Tuesday.

A top aide involved in pandemic response for a northeastern governor called the pause “a very serious problem” and comes amid an already scheduled declining supply of the Johnson & Johnson that was causing changes in the system’s vaccine plans.

“This really impacts how many people you can full vaccinate by the summer. Additionally it may cause more hesitancy,” the official said.

I want to note that the national reproduction number is now one, which means the coronavirus is spreading at a level of one new person for one infected person, and the epidemic is nearing its end. Any action that delays the distribution can also halt many areas’ reopening, especially where blue state restrictive policies are preventing regular business and personal activities.

The wisdom of the decision is also being questioned, given the exceedingly small number of cases compared to the number of shots provided.

For context, clotting appeared in far fewer than 1 in a MILLION J&J recipients.

The Biden WH needs to make clear to the public that these vaccines are safe & effective. By getting them you assume roughly the same level of risk you do taking many OTC meds.

I cannot believe they are pausing the vaccine when you have a 99.9992% chance you wont get these blood clots….assuming the vaccine even does cause them. This is ridiculous

My take: The CDC and FDA officials have enjoyed enormous sway over the American people for over a year. They are on the precipice of losing the spotlight, and this is one last gasp before the combination of natural immunity and vaccines returns them to the halls of the faceless behemoth of bureaucracy again.

It would also have helped if the American press reported news factually without the dramatics. Reporters have not gotten over their Trump-era hysteria yet.

Many lessons have been learned during this pandemic…but not all of them have been about science.

I checked the CDC Vaccine Adverse Effects Reporting System today and I saw the 2200 deaths have been associated with the RNA vaccines. So, why is the only Non-RNA vaccine stopped after 1 death?

Something does not add up.

I’ve already had round one of Pfizer but if I hadn’t and I were offered the J&J vaccine, I’d take it. The risk of developing blood clots is higher for birth control pills than they are for this vaccine.

That’s just a blatant lie. The CDC vaers website specifically states that no link has been found between vaccine use and reported deaths other than those related to blood clots to date.

Statement by Donald J. Trump,
45th President of the United States of America

The Biden Administration did a terrible disservice to people throughout the world by allowing the FDA and CDC to call a “pause” in the use of the Johnson & Johnson COVID-19 vaccine. The results of this vaccine have been extraordinary but now it’s reputation will be permanently challenged. The people who have already taken the vaccine will be up in arms, and perhaps all of this was done for politics or perhaps it’s the FDA’s love for Pfizer. The FDA, especially with long time bureaucrats within, has to be controlled. They should not be able to do such damage for possibly political reasons, or maybe because their friends at Pfizer have suggested it. They’ll do things like this to make themselves look important. Remember, it was the FDA working with Pfizer, who announced the vaccine approval two days after the 2020 Presidential Election. They didn’t like me very much because I pushed them extremely hard. But if I didn’t, you wouldn’t have a vaccine for 3-5 years, or maybe not at all. It takes them years to act! Do your testing, clean up the record, and get the Johnson & Johnson vaccine back online quickly. The only way we defeat the China Virus is with our great vaccines!

I had picked the J&J vaccine and been trying to get it for two weeks. The rate of this is far below some of the other vaccine risks

I wonder how many people will decide to hold off on switching to the double-dose option in hopes that the J&J comes back into use sooner rather than later and they may be able to get it? You don’t have to be a rocket scientist to figure that on average, people will prefer one shot and done vs. two shots spread out.

And just my opinion, but as seen in with the volcano story further down, travel will almost certainly be next up in the arsenal to compel vaccinations as the the supply and demand metrics flip.

As if we needed some confirmation that there is value to questioning the safety of experimental treatments.

There is always risk.

I’m not taking risks to avoid a disease that has a 99.98% survival rate for the 1 in 10,000 people who contract the disease. Besides, I’m not worried about blood clots, there are worse unforseen issues.

6 questionable results out of 6 million injections. How risk adverse have people become?

Let’s put it this way:

The people who insist that the death rate from “covid” is unacceptable and we have to kill the economy “if it saves just one life” are the same ones who pooh-pooh the risk of serious if not fatal adverse events from experimental vaxxes.

I may or may not have the choice of contracting “covid,” but I sure as hell have to choice to forego experimental treatment with unvetted shots which lack long-term safety data…especially when alternative treatments exist.

While you might fight a battle of attrition this way (which is what we’ve been reduced to in online discourse these days), no one wins the war of the future by stooping to the levels of the opposition.

Freak out and hyperbole (and anti-vaxx) propaganda is the way of the left…let’s keep it that way.

What is “anti-vaxx” (an epithet, really, and not the way to win people to your point of view) about saying “Since this is still an experimental vaxx (being under EUA and thus lacking FDA authorization) which doesn’t have long-term safety data and the risks are still unknown, I’ll pass”?

It’s not “hyperbole” or “freaking out” to note there are legitimate concerns regarding this “vaxx” (which technically isn’t a vaxx, but that’s a story for another day). I’m hardly alone in holding this viewpoint, and there are plenty of medical professionals (who would emphatically reject being characterized as “anti-vaxxers”) who also share these concerns.

You want to be a guinea pig, fine – that’s your choice. I’m not interested in participating. I’ve survived plenty of other illnesses, and I’m not concerned about this one.

Sorry, I meant “not FDA approved”…”authorization” was stuck in my brain from the EUA.

You want to take it? You go ahead. There’s no upside to doing so. It won’t confer immunity and it won’t keep you from passing the disease on and most importantly, you still won’t get to go back to a normal life even if you do take it. If that’s they way they want to play it, f*ck them, I’m not playing along.

What’s the point in having power if you don’t use it.

Hey – I just got the J&J last week, so I could visit my aunt before her surgery. The only symptom I had was it felt like the nurse took a big swing and punched me in the arm. I’ll let you guys know how I’m doing! 😉