“I, as the Editor-in-Chief of this newspaper, am a certified girl boss.” 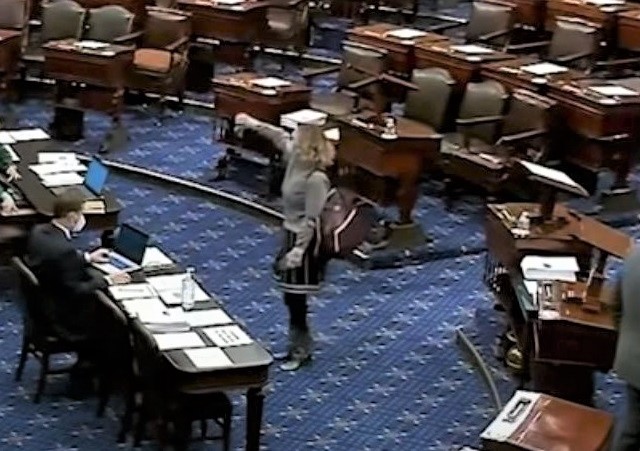 The editor was apparently angry with Sinema for not voting for the increase in the minimum wage.

Campus newspaper editor-in-chief: An ‘intersectional’ feminist is the ‘only kind of feminist that matters’

The editor-in-chief of the student newspaper at Point Park University in Pittsburgh, Pennsylvania accused Sen. Kyrsten Sinema (D-AZ) of not being a “true intersectional feminist,” because she voted against a $15 per hour federal minimum wage.

On March 10, just two short days after International Women’s Day concluded, Jordyn Hronec published a piece titled ‘The Problem with ‘Girl Bosses,’’ in which she discussed the issues that exist in “girl boss” culture.

“I, as the Editor-in-Chief of this newspaper, am a certified girl boss. And on the day that I am writing this, it is International Women’s Day. So it’s the perfect time to discuss the problems that exist within ‘girl boss’ cultures,” starts Hronec.

The opinion piece focuses on Sinema’s recent vote against a rise in the federal minimum wage and her opinion about what feminism should truly embrace.

“Sinema’s ‘no’ vote was significant because she was one of eight Democratic senators who voted ‘no,’ along with the Republicans, and the amendment failed as it missed the threshold filibuster mark of 60 ‘yes’s by two. It was also significant for the manner in which it was done. In the video, Sinema happily gave a wordless thumbs down before walking out of the chamber,” states Hronec.

In this case, Sinema respected the wishes of her constituents, which don’t include any woke girl bosses in Pittsburgh. I know it shakes the left all the way down to their Birkenstocks, but once upon a time, Democrats did that.

In response to Henry Bowman’s patronizing and condescending comment, I would like to clarify, as one of Sinema’s constituents, that she is not respecting our wishes. Recent polling shows that 62% of likely Az voters are in support of a $15 minimum wage. Thank you Jordyn Hronec for tackling the subject of Girl Boss culture!

Certified girl boss. Whatever that is…

In days when major newspapers were self-contained corporations, the Publisher usually owned all or most of the paper. Hence, it made sense that he would have the right to establish and write about the “official position” of the paper. In student papers, the editor-in-chief is an elected position that does not know any part of the paper. (In many cases, the student paper is subsidized from student activity fees or from the Journalism Department budget.) Some student papers have a committee to write official editorials. So, the question is, who writes the editorials and what does it purport to express or represent: the views of the author or the views of the entire paper?

Perhaps an adult can explain the problems of inexperience, immature girl boss culture?

And why should a Senator from Arizona care what the “editor-in-chief” of a student newspaper at a college in Pennsylvania that no one outside the immediate neighborhood of said college thinks about anything? Maybe that e-i-c should check her self-proclaimed privilege and get on with the business of learning and becoming a useful member of society.