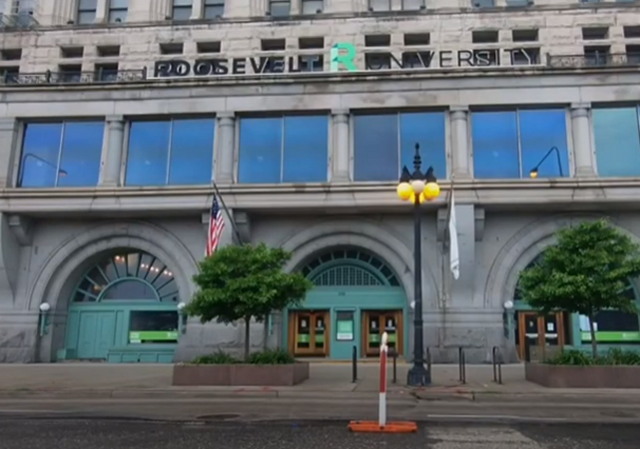 Two professors from Roosevelt University in Chicago, who also serve as members of a local school board, were recently caught on a Zoom call bragging about how much they love being at the university because they get to teach social justice all day.

One professor appears to teach education, while the other teaches public policy.

Two Roosevelt University professors who also serve on the Oak Park and River Forest High School school board were caught on an open Zoom call bragging about how they promote Marxist re-organization of American society to their college students.

Talking before the start of OPRF’s Feb. 26 board meeting on a live microphone, Gina Harris and Ralph Martire said they were proud to advocate for so-called “social justice” Marxist economic concepts.

“I mean, it’s all social justice. All day, every day, I get to talk about the things I love. I’m really living the life over here,” Harris said.

She called social justice “a part of everything,” adding that she was teaching “middle school theory and practice” to future K-12 teachers at Roosevelt.

Martire, a Roosevelt professor of public policy and public administration, said the way he views government budgets is through a lens on how use them to “organize society.”

According to this January 28 article by Steve Schering of the Chicago Tribune, the students at the OPRF High School are being instructed in this ideology:

Nearly two years after students first expressed a need for a class to openly discuss racial and equity issues, Oak Park and River Forest High School announced the first group has been enrolled in the course.

The new race equity course is designed to engage students in dialogues about race, equity and diversity, while developing solidarity across identities, officials said.

Students will not only learn about racial inequity, but identify steps to challenge racial inequity. A key goal is to provide students the confidence and tools to encourage others and lead such conversations outside the classroom.

Parents need to get more involved. Get on the local school board and get to know who is teaching your children.

1,000s more like these two clowns. Doing all they can to undermine America and push forward a Marxist agenda.

Who elected them? The majority of the people in the district who bothered to vote, that’s who.

No offense, but you’re 100% wrong. Who elected them is the voters whose children are already grown and out of the district (college, work, life, etc.) and who could no longer be “bothered” with voting for schoolboard positions.

NOTE: I, myself, have been one of these very same people until recently.

RT
Biden administration argues to SCOTUS that public schools have the right to monitor the social media and speech of students off campus, outside school hours in order to punish them for wrong think.
https://www.washingtontimes.com/news/2021/apr/27/justice-department-to-urge-supreme-court-to-rule-a/

Do “normal” thinking faculty exist in most departments now? It has only been about 15 years since I left school, but my leftie professors were sane. I still keep in touch with a few of the professors from the department and they are rational people, though lefties.

Where are all these insane people being found?

Which normal? The population at large, or just in public education?

In higher education. I work in public education and we, by and large, are pretty based in my small, rural school. Only one real lefty, and she is mostly rational.

How does somebody get to the point that they BRAG about not teaching their subject while simultaneously forcing young people to accept your ideology? Maybe I am just naive, but I don’t think I know a lot of people that would do that. The lack of integrity or a sense of personal honor seems to be completely missing. How does a person get to the point that their political views are more important than doing their job correctly?

They are teaching their subjects. One is teaching education — how to indoctrinate middle schoolers; and one is teaching public policy — how to use government budgeting to impose social justice. If they truly believe in Marxism, which they appear to, then why would they be ashamed to discuss it among themselves?

I can’t speak to classes on government, but that is definitely not any part of how to effectively teach.

Good name for the school.

the Ace of Spades is a website for gays

Can/will you cite reasons for saying so?

These two make me want to projectile vomit. Their smug humor shows they are laughing at the students and society as a whole.

“Parents need to get more involved. Get on the local school board”

But Chicago, so no.

Illinois is deep blue but this is happening in red states to. Idaho just banned it, other states need to join it.

Oak Park is the town in the famous video of a blond lady board member screaming at a male board member that he had no right to speak because he was white. http://www.insideedgepr.com/strange-times-in-oak-park-responding-to-a-rant-straight-out-of-the-trumpian-playbook/