I cannot wait to read what Donald Trump has to say about this. 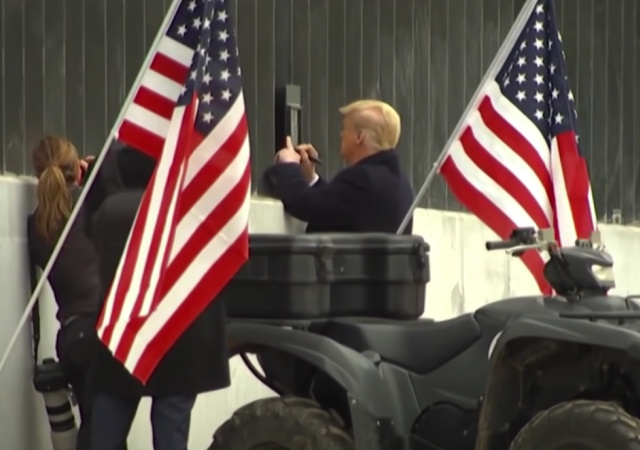 The Washington Times reported that Department of Homeland Security Secretary Alejandro Mayorkas wants to restart construction on the border wall to fill any gaps.

In a conversation with Immigration and Customs Enformcement [sic] employees last week Mr. Mayorkas was asked about his plans for the wall and he said that while President Biden has canceled the border emergency and halted Pentagon money flowing to the wall, “that leaves room to make decisions” on finishing some “gaps in the wall.”

Mr. Mayorkas, according to notes of the ICE session reviewed by The Washington Times, said Customs and Border Protection, which oversees the wall, has submitted a plan for what it wants to see happen moving forward.

“It’s not a single answer to a single question. There are different projects that the chief of the Border Patrol has presented and the acting commissioner of CBP presented to me,” the secretary said.

“The president has communicated quite clearly his decision that the emergency that triggered the devotion of DOD funds to the construction of the border wall is ended. But that leaves room to make decisions as the administration, as part of the administration, in particular areas of the wall that need renovation, particular projects that need to be finished,” he said.

Biden pledged his administration would not build “another foot” of President Donald Trump’s border wall.

I guess he isn’t technically breaking his campaign pledge. Mayorkas said the parts of the wall “include ‘gaps,’ ‘gates,’ and areas ‘where the wall has been completed but the technology has not been implemented.'”

Ought to be entertaining to see how that Spokes-Harpy Psaki tries to lie the Harris-Biden Regime out of this one.

Psaki has shown herself to an example of what has given PR people such bad reputations.

Paski is deficient in every way, Kayleigh McEnany is smarter and has much better personality,

Biden is inferior to Trump, Paski is also inferior. to Kayleigh McEnany.

They know this, and it is eating at them.

Raggedy ginger Anne Pinocchio Psaki will be offended by those accurate remarks.

That upward inflection way of talking drives me friggen nuts. I’m waiting for the day when she forgets to take out her bubblegum at the mic.

And is much prettier, too.

Kayleigh was ready, willing, and able to do battle with the slanted press. So was Sarah. Watching both of them put those losers in their places was most entertaining.
.

Reminds me of a Frank Jacobs greeting card in a MAD magazine article. (Amazing and embarrassing that I remember this from ~50 years ago. PURGE! PURGE!! 🙂

Inferiority complex, phooey!
It’s all in your mental interior.
You don’t have a complex at all.
The truth is: You’re just plain inferior.

Whatever lies she tells, the media will accept and praise Biden for having the courage to let her say it.

Three months in and Grandpa Gropes has managed to p*ss off people of every ideological stripe from sea to shining sea.

Say what you will about Uncle Joey, but that takes real talent.

Q predicted all of this, long ago. You can find it freely on the web. He titled it, “The Cat in The Hat.” It’s not too hard to figure out, but The Cat represents Biden. He does all these outrageous, juvenile things, makes a great big mess, and then has to clean it all up again.

Possibly that wasn’t Q. I know it was one of those banned white guys.

Why do you think Biden will clean anything up? Destruction is the plan, not the side effect.

For some reason I thought about this quote from Animal Farm:

“That evening Squealer explained privately to the other animals that Napoleon had never in reality been opposed to the windmill. On the contrary, it was he who had advocated it in the beginning, and the plan which Snowball had drawn on the floor of the incubator shed had actually been stolen from among Napoleon’s papers. The windmill was, in fact, Napoleon’s own creation. Why, then, asked somebody, had he spoken so strongly against it? Here Squealer looked very sly. That, he said, was Comrade Napoleon’s cunning. He had seemed to oppose the windmill, simply as a manoeuvre to get rid of Snowball, who was a dangerous character and a bad influence. Now that Snowball was out of the way, the plan could go forward without his interference. This, said Squealer, was something called tactics. He repeated a number of times, “Tactics, comrades, tactics!” skipping round and whisking his tail with a merry laugh. The animals were not certain what the word meant, but Squealer spoke so persuasively, and the three dogs who happened to be with him growled so threateningly, that they accepted his explanation without further questions.”

Orwell was a political prophet. Huxley was a social prophet. And we see their prophecies being fulfilled right now.
.

First, they’re going to have to pay cancellation fees to the contractors they shafted when they yanked the building contracts. Then, they’ll have to get new contracts drawn up, and you can bet there will be hefty cancellation fees in there again if the Gov yanks funding.

Then the Dems will complain about how expensive it is, completely blind to their own role.

Biden wants to end the end of the border emergency ?

In fairness to Biden, everyone knew he had been a politician for 50 years. That anyone would actually expect a long-term politician to keep their overall promises without resorting to weasel words and implied fine print is astounding.

Bill Clinton was elected largely for his promises to implement a ‘middle-class tax cut’ following HW Bush allowing himself to be maneuvered into a tax hike following his ‘read my lips, no new taxes’ 1988 campaign statement.

Most of us are aware that Clinton raised taxes. Most are unaware that during a congressional hearing his administration stated, in response to this fact beimg pointed out under questioning, words to the effect ‘ ..political campaigns make promises they sometimes can’t keep’ and ‘that any rational and informed person wouldn’t have made financial decisions based upon promises’.

Recall that his tax increase was retroactive to the beginning of the year…..

IMO, the reality of the facts on the ground regarding immigration and many other issues are beginning to become clear to administration officials and the public. The longer the administration insists upon pushing philosophical views that might be fine in an academic debate but that clash mightily with reality the further the administration will have to deviate from their philosophy in order to adapt and implement solutions that actually work.

Immigration is but one example where the public views reality while the administration placate the ideological beliefs of the extremists.

Eventually they’ll be taking full credit for the wall and claiming that Trump was the one standing in the way the whole time.

The way the few leftists I still come in contact with these days react to the MSM, I would not be surprised if they bought that lie. These people are so far down the rabbit hole that they’ll believe anything from the approved “news” sources.

There’s zero chance this will happen. At the very least, it will be mitigated down to the height of a little league baseball field and called the Kamala Harris Cackling bunny hill of Inclusivity and Mocking of Whiteness

Today is Day 78 of the Biden Administration and no one has asked Barrett or Kavanaugh if they or their families are being threatened, and if they are, where the threats are coming from.

Day 78 and no one in congress has asked Pelosi how she knew about the Nov.3 Big Steal. She admitted so.

Day 78 and no one on either side of the media is expressing outrage at the barbed wire around DC.

Department of Homeland Security Secretary Alejandro Mayorkas is about to be out of work! He cannot take a position other than “joes” stupid one.