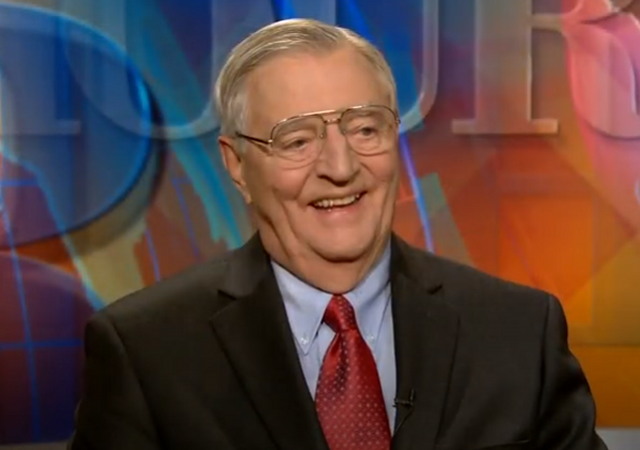 Walter Mondale served as vice president under Jimmy Carter and lost the 1984 presidential election to Ronald Reagan in a landslide.

He passed away last night at the age of 93.

Walter Mondale, a former vice president and progressive icon who once staged an unsuccessful bid to unseat Republican rival Ronald Reagan for the presidency, died Monday at age 93.

Mondale’s family said in a statement that he died in Minneapolis, the Associated Press reported. No cause of death was given.

“Today I mourn the passing of my dear friend Walter Mondale, who I consider the best vice president in our country’s history,” Carter said in a statement. “During our administration, Fritz used his political skill and personal integrity to transform the vice presidency into a dynamic, policy-driving force that had never been seen before and still exists today.”

“He was an invaluable partner and an able servant of the people of Minnesota, the United States, and the world. Fritz Mondale provided us all with a model for public service and private behavior. Rosalynn and I join all Americans in giving thanks for his exemplary life, and we extend our deepest condolences to his family,” the statement added.

Statement from Jimmy Carter on the passing of Walter Mondale is below. pic.twitter.com/SOqAmTSYo6

Saddened to hear of the death of Walter Mondale. I covered his 1984 presidential campaign from the primaries all the way to election day. I privately disagreed with his policies but I had the highest regard for him as a person. He was a great guy. RIP

History buffs will recall the ‘drop the mic’ moment Reagan had with Mondale during a presidential debate:

What a very different time this was in American politics.

On day after his 53rd birthday – Jan. 6, 1981 – he announced his defeat in the electoral college:
“Walter F. Mondale has received 49 votes."
Ovation.
Mondale to Tip O'Neill: "A landslide"
O'Neill: "Very impressive"pic.twitter.com/fSbyuRy9YI

This is what the dems deprived us of this year, our landslide.

Mondale knew how to unite the country.

49 electoral votes’ worth, at least.

I still remember as a teenager, watching the election results and how jaw droppingly one sided it was. I don’t think I’ll ever see something like that in my lifetime.

Not with a GOP winner, unfortunately.

Wally and The Beaver!

I notice none of the comments are like the sick detritus the left puts up when people like Limbaugh die.

The only politico I said, “GOOD.” when he died was Ted Kennedy. There isn’t a level low enough in Hell for him.

Harry Reid comes close. Waiting for that moment too.

Another dead politician. I really don’t care either way.