One Dead, One Officer Injured in Shooting at Tennessee High School

One Dead, One Officer Injured in Shooting at Tennessee High School

A Knoxville police “officer was struck at least one time and transported to the UT Medical Center with injuries that are not expected to be life-threatening.” 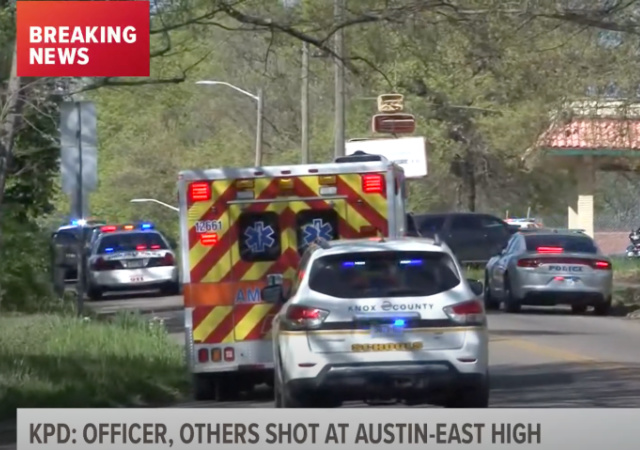 ***I will update this post as more information comes out.

Based on the preliminary investigation, Knoxville Police Department officers responded to Austin-East Magnet High School on the report of a male subject who was possible armed in the school. Upon approach of the subject, shots were fired.

A KPD officer was struck at least one time and transported to the UT Medical Center with injuries that are not expected to be life-threatening. One male was pronounced deceased at the scene, while another was detained for further investigation. There are no other known gunshot victims.

The superintendent tweeted shortly after KPD received the report that they secured the school. They then released students not involved in the shooting.

The school building has been secured and students who were not involved in the incident have been released to their families.

The Tennessee Bureau of Investigation is currently “gathering information and conducting interviews. Hopefully, agents will have an update later.

TBI agents continue to investigate what led to an officer-involved shooting inside Austin-East HS Monday afternoon.

Agents are at the scene gathering information and conducting interviews.

A media briefing will be held at 8:00 ET. We will announce the location soon. pic.twitter.com/MYd2OvGWB7

But I thought if Biden was elected America would become a better, kinder place!

better that it be cindered than destroyed by de Toqueville’s notion majority rule.

This school is in a street named for MLK, 87% minority, math proficiency under 5%.

I note it’s a magnet school. To pick up what, exactly?

Does that mean the school ‘s purpose to to attract all the want to be gangsta duds?

I don’t know this particular school. It is more common than I would like, but some places with some version of school choice have trouble eliminating schools abusing the system. It happens that sometimes school receive XX amount of money per kid (my school gets about 8.5K per kid) and funnel that money into paychecks for relatives, contractor work to relatives to “fix up” the school, other contracts to provide for the school, etc.

The state won’t know they are being robbed until somebody (usually the local public school who was trying to pull a version of the same scam) reports the abusing school and the state takes the time to investigate.

seems to me that we have had more shootings in the last 4 months – coincidentally, the same 4 months Xiden has been in office – than we have the last 4 YEARS. Am I wrong?

Whenever a Democrat gun ban bill is in the hopper, shootings mysteriously peak.
Tinfoil hat? Maybe, but explain this sort of thing.
The article doesn’t mention that the FBI was present in person, watching the perp, knowing full well what he planned, and did nothing to stop him.

Anyone notice a pattern?

Were there actually more shootings, or just more news reports about shootings?

good question. but it is not like the media wouldn’t have blamed it on Trump

I’m happy to hear that the leo will survive, at least.

Making the case for teachers to carry guns, one shooting at a time.

As with any other horrific event like this, the Communist politicians and their toadies in the media won’t allow us to mourn and come together as a nation. Get ready for the white supremacist / gun control / Trumpkin insurrection opportunism to drive us apart even more.

Last night I noted a reference to the shooting happening just after the Governor signed “Constitutional Carry” into statute with an effective date in July IIRC. What that has to do with a school shooting was not offered in way of explanation (of course).

Shootings? It is an intentional discharge of a firearm. Until the media calls a spade a spade they’ll continue to be ignored. Buttheads.

why was the ATF on the scene?

Another punk on the Thugvon path. Thugvon was trying to get a gun, there were indications that dad may have been involved.

What were the indications that you were involved, or were you really not there?

??? It was reported that Thugvon texted with his sort of father about acquiring a gun, clearly this punk actually acquired one.

Another news outlet (CBS-local there) informed us that the magnet school is oriented to the “performing arts” and has about 650 students and 150 teachers and support staff. It also added that 4 other students of this school had been shot dead so far this year. It did not give any info on these events, such as at the school or elsewhere, or about the circumstances surrounding said shootings. It seems high for what one might imagine the general nature of “performing arts”-types might be.

Then I realized that rap is often included in “performing arts”, and it did not seem so strange any more.

Not a peep about this on 2 of Indy’s news sites. (Didn’t check out the others)