Few events have put a better perspective on the exaggerated level of COVID risk than this one. 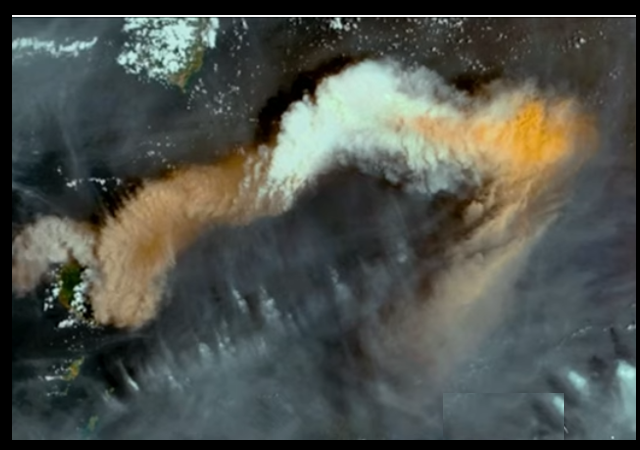 Last week, La Soufriere, an active stratovolcano on the Caribbean island of Saint Vincent, began to erupt. Unlike Iceland’s recent fissure eruption, the volcano has been explosive, sending out hot gas and ash and creating potentially deadly conditions for its residents.

La Soufriere volcano fired an enormous amount of ash and hot gas early Monday in the biggest explosive eruption yet since volcanic activity began on the eastern Caribbean island of St. Vincent late last week, with officials worried about the lives of those who have refused to evacuate.

Experts called it a “huge explosion” that generated pyroclastic flows down the volcano’s south and southwest flanks.

The National Emergency Management Organisation, or NEMO St. Vincent and the Grenadines, said on Facebook that the Monday blast took place around 4:15 a.m. and was visible on radar from the nearby island of Martinique.

The pyroclastic flows of superheated ash and gas are deadly as they travel down the slopes of volcanoes. Anyone caught in them dies instantly. The flows are so fast (100-200 km/hour) that there is no way to outrun them.

The island’s political leaders consider the coronavirus, which is survivable by 99.5% of people under 70, a bigger risk to human health and safety. The nation’s prime minister announced that people being evacuated to certain neighboring islands only if they’ve been vaccinated against COVID-19.

Cruise ships have been dispatched to the island that is being partially evacuated after the 4,000-foot high volcano La Soufrière erupted on Friday.

But people have to be vaccinated before they board the cruise ship, Ralph Gonsalves, the prime minister of St. Vincent and the Grenadines, said at a press conference the day after the eruption.

“The chief medical officer would be identifying the persons already vaccinated so that we can get them on the ship,” Gonsalves said.

I wonder if they will force people who have only received the first shot to remain on the island a full 3-4 weeks before finishing with the second before they are permitted to leave? But those who have been recently evacuated to catch a bit of a break: Those only recently vaccinated would have to wait “a day or two” after receiving the jab before being transported to other nations.

Meanwhile, the cruise lines are trying to be a bit more flexible:

A spokeswoman for Celebrity Cruises told The Independent they will only require a negative PCR test for evacuees to board.

“Our ship remains off the coast of the island awaiting word on whether or not we will be needed,” she said.

Several companies that have offered ships for evacuation have also been contacted but did not immediately respond by the time of publication.

While the majority of people evacuated before the first eruption, the cruise ships called to help evacuate 136 farm workers stranded on the island after a flight was cancelled from the first explosion. They arrived in St Lucia on Saturday, according to the Associated Press

“Anybody who would have not heeded the evacuation, they need to get out immediately,” Erouscilla Joseph, director of the University of the West Indies’ Seismic Research Center, told the outlet.

I must note that the latest explosion is equivalent is the event of 1902 that killed about 1,600 people. Interestingly, the 1902 event was followed a few hours later with Mount Pelée’s eruption on Martinique that killed 32,000 and essentially wiped out any remaining Carib culture.

Few events have put a better perspective on the exaggerated level of risk poised by the coronavirus than this one. Prayers for the safety of all the people in the region – vaccinated or otherwise.

The insanity, and stupidity, continues.

Anyone who wonders how the Nazi death camps and the Soviet Gulags and Pol Pot’s killing fields could have ever existed need only study the exploitation of Covid-1984 by power hungry authoritarians and bureaucrats, and their supporters and enablers, around the world. Including in the nation formerly known as ‘The Land of the Free’.

This includes the sheep who say nothing.

If they were teachers in Michigan and wanted to go on vacation, it would be no problem.

No justification for this on earth.

No one should be tested for anything at this point. Save them and then worry about it.

Is Zeke Emmanuel behind this, by the way? This smells like death panels.

No vaccination? No problem! You still won’t die from covid because we’re going to leave you to die from the volcano.

It’s all part of the plan to flatten the curve. You’re welcome!

Sorry, but we only evacuate “acceptable” people. If you haven’t gotten your experimental shot, or you have a positive PCR test (which is NOT the same as having “covid,” mind you), well too effing bad. Die, you scum….

Because COVID, with its 99.9% + survivability rate, is much more dangerous than a volcanic eruption.

This policy preference wasn’t elegantly expressed to say the least. Though it is instructive of the sort of decisions officialdom chooses to make. These guys are living up to the hype: ‘ I’m from the govt and here to help you’.

Nothing says we hate you more than telling you to die.

I am pretty sure no one has allowed children to be vaccinated yet. Are they leaving all the children of the island to die? Or are they taking custody of them and leaving their unvaccinated parents to die?

At this point, let them die. After all, we must sacrifice more than 1,600 people to a volcano so that the COVID Gods are pleased.

Looks like the “Progressives” have REGRESSED the world back to the Stone Age.

Legal liability. You people of all people should know better. The cruise ships are one of several departure sources, and they don’t want to be sued by anybody who picks up a case of Covid a week later. It’s going to be a requirement for anybody to work or ride on a cruise ship for the next year at least: verified vaccination or you don’t set foot on board. Frankly, I don’t blame them. The cruise industry is suffering, and political Karens all across the globe are looking for any excuse to exercise their muscle and shut them down.

covid lawsuits have to stop. You couldn’t sue a business because you got the flu there, so why can you sue if you get covid?

Exactly. Ambulance chasers are no doubt part of the reason for all these silly corporate mask policies enforced by Nazi Karens.

Point understood but this is an unusual circumstance demanding an unusual response.
.

So if these non-vaccinated people die from the earthquake fumes, the official cause of death will be listed as Covid.

So “my body, my choice” only applies to abortion?