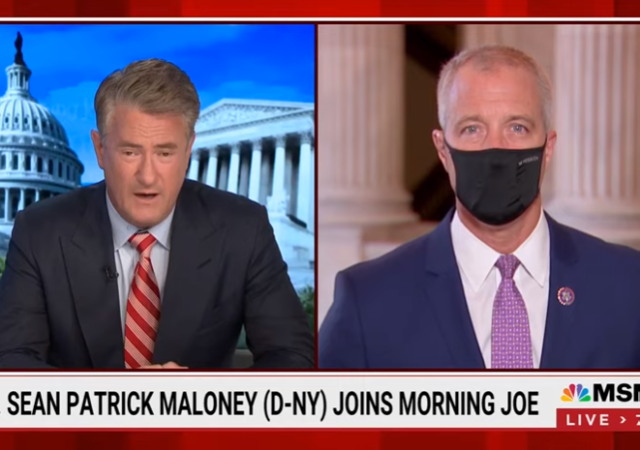 Rep. Sean Patrick Maloney (D-NY), who is also the chair of the of the Democratic Congressional Campaign Committee, appeared on Morning Joe today and showed exactly why Democrats are in danger of losing the House in 2022.

Joe Scarborough was trying to help him but Maloney reacted by becoming angry and defensive.

Scarborough reminded Maloney that House Democrats suffered major losses in 2020 and that their majority is now razor thin. He asked Maloney how they are going to respond to accusations of socialism, packing the Supreme Court, cancel culture and the defunding of police.

Instead of providing a rational answer, Maloney accused Scarborough of repeating Republican talking points. He then launched into Democrat talking points about fighting for racial justice and tried to paint the GOP as the party of QAnon.

Julia Manchester of The Hill has details:

Rep. Sean Patrick Maloney (D-N.Y.) and MSNBC host Joe Scarborough on Friday got into a heated exchange over Democratic messaging ahead of the 2022 midterm elections.

In an appearance on MSNBC’s “Morning Joe,” Maloney, the chairman of the Democratic Congressional Campaign Committee, was pressed by Scarborough repeatedly about Democratic messaging on the issue of defunding the police in 2020, to which Maloney said the party was committed to fighting racial injustice.

“My argument is what are you doing about racial justice?” Maloney asked. “Our party is going to do something about it.”

“The answer is no,” Maloney responded. “And you are asking the question and you’re repeating a Republican talking point for reasons I don’t know.”

This is a little over eight minutes long, but worth watching in full:

It’s hilarious to watch Maloney say with a straight face that Democrats don’t want to defund the police. He clearly needs to check in with other members of his party and celebrity supporters.

It wasn't an accident. Policing in our country is inherently & intentionally racist.

Daunte Wright was met with aggression & violence. I am done with those who condone government funded murder.

No more policing, incarceration, and militarization. It can't be reformed.

All that funding and reform hasn’t stopped the police from killing people or made our communities safer.

The problem is systemic and it requires systemic solutions.

A lot of people who feign outrage when we talk about divesting from systems that perpetuate violence, trauma & death were quiet about the above policy violence.

Our hearts are heavy over yet another shooting of a Black man, Daunte Wright, at the hands of police. It’s important to conduct a full and transparent investigation, but this is also a reminder of just how badly we need to reimagine policing and public safety in this country. pic.twitter.com/sgcbRjlApr

The murder of #DaunteWright is rooted in white supremacy and results from the intentional criminalization of Black and Brown communities.

This system can’t be reformed.

It must be dismantled and a real system of public safety rebuilt from the ground up.#DefundThePolice

We are dealing with millions of acres of rotten apples…#DefundThePolice

Let’s not forget this gem from December.

It’s a test of their developing doublespeak skills. And of how successful their Orwellian public school indoctrination efforts have been.

Yes, diversity (i.e. color judgment) politics, not limited to racism. That said, while bias is intrinsic, prejudice is progressive.

The Democrats DON’T CARE if it’s a losing message.

They already cheated their way to victory in the Presidency AND the Senate. Even the weak Georgia bill was OMG RACIST.

They don’t care if a message is winning or losing because they don’t plan on losing ever again. And thus far, they’re right.

No, they don’t. When they lose an em-pathetic appeal, when secular incentives fail to influence the vote, they will use intimidation, force, and social justice to override the outcome.

The conventional explanation for the Dem’s unhinged radicalism was that they expect to lose at least the House in 2022, so they are ramming through the most radical possible agenda while they can.
I believe the truth is as Olinser has stated above:
They don’t care about attracting votes, because they have figured out how to permanently rig elections in their favor. It’s a little more complicated at the House level, since there are 435 seats, but they only need to win the closely contested ones by a few thousand votes at a time.
God help this country.

Even if they lose the House and can’t get their Elect Democrats Forever bills passed, they are cramming through trillions of dollars worth of kickbacks on our taxpayer dollars, and their re-election funds will be overflowing with dirty dollars.

Defund the policy implies delayed secondary response times to a trans/bisexual attacking a trans/homosexual club, to a black supremacist attacking the community, to a disgruntled Democrat attacking people on a baseball field, to a student off his medication, to an employee attacking people at random, to a mother who believes that Choice is the only viable relief for her burden(s), etc.

They are eating their own… The sooner the better.

How dare you ask me a question that implies opposition to the leftist agenda is in anyway legitimate. These people are demanding a one-party state, whether they admit or not.

Yes, defund the police in all major metropolitan areas. Have them stop responding to calls in high crime areas. Have them refrain from attempting to arrest any suspect who tries to resist. Let the big city progressives accept the full insanity of their positions.

It’s hard to imagine why cops still answer those calls even now. I guess they are ordered to and they haven’t qualified for pension yet. I recall that in NYC the Mayor made some special order that the cops had to go out and expose themselves to these impossible situations, they couldn’t retreat to their cars or the police station, and Dunkin Donuts is probably closed due to Covid.

I have more respect for the squad than what I do for Rep. Maloney. I do not agree with the squad’s politics one bit. But at least the squad is honest about their policy goals unlike the mealy-mouthed Rep. Maloney.

Yeah he sure as hell didn’t run for election or reelection to the House on this racial justice platform. He was about bringing home the goodies to the district.

At least the squad is actually telling us what they are going to do.
Going forward until the Democrats lose a election I will have doubts they will, they have cheating down to a science.

I wonder when the celebrity hypocrites plan to defund their own personal security?

So why does Gavin Newsom have 8 million Californians in a an unemployment black hole saying they can’t prove their identity when they did. Go read Reddit UE forums. They are becoming homeless after 9 months of being told that your California Drivers Lic is not a government issued ID.

Yet you don’t need a government issued ID to vote.
Talk about a losing message.

De-funding the police is a backdoor attempt to bring back capital punishment. Without the police, there will be no gray area here.

LOL on that Joe Scumborough interview. He did some of the most pathetic grovelling to that Maloney character that I have ever seen. Pathetic. I wouldn’t be surprised if Scumborough kissed Maloney’s shoes when it was all over and he begged forgiveness.

These dems are just the worst sorts of bottom feeders … but that’s not news. I, for one, want absolutely nothing to do with any of them. They are no countrymen of mine. I am looking forward to a national divorce, to be rid of these lowlifes.

That’s my congresscritter. Ugh. I don’t recall him running on “racial justice” in 2020, 0r 2018. He was the Clinton protege candidate, which means he controlled the Dem machine in Westchester County, and the vote counting in our area has suddenly started electing every Dem candidate no matter what. 2017 and 2018 were particularly egregious.

They “held the House in a particularly difficult cycle”? He would probably claim Biden defeated the incumbent president, and generally that “cycle” business applies to the Senate where there are 3 different “classes”, not the House where they run in every even numbered year. So he’s making up incoherent nonsense and getting all morally fake-righteous about it.