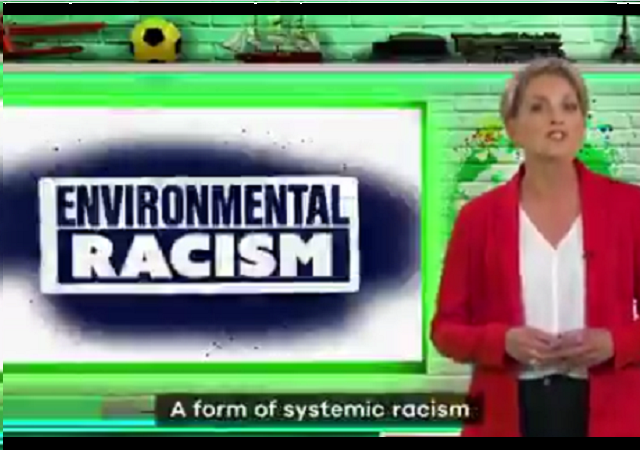 Nickelodeon has jumped on the woke ‘Critical Race Theory’ bandwagon with a new video explaining what “environmental racism” is for all those kiddies out there who might be pondering, even agonizing over, race in America.

Like all CRT-acolytes, Nickelodeon treats “environmental racism” not as a theory to be considered (before being roundly rejected) but as a fact that cannot be disputed. And it’s ten kinds of cringe.

Most cringey of all, perhaps, is that Nickelodeon knows it’s peddling propaganda to children, so to avoid any blowback, they’ve disabled the comments on the tweet.

I did check other Nickelodeon tweets to ensure this wasn’t just their weird policy for social media “engagement.” It’s not. Here’s a tweet before this “environmental racism” drivel was posted:

your top 3 favorite nick characters of all time… go

As you can see people been able to reply to Nickelodeon’s tweets . . . except the one pushing a divisive, racist narrative that is destroying our country and our children.

Silly Nickelodeon doesn’t seem to understand how to Twitter. Here are just a sampling of the reactions to the video and to Nickelodeon’s cowardice in refusing to allow feedback.

If you have kids that still watch Nickelodeon, turn it off. They run the racial and lefty bs all the time. Aimed right at your kids. https://t.co/G8sgSqZMwS

I remember when Nickelodeon didn't indoctrinate our kids. https://t.co/IUU9pBmgDd

Nickelodeon is brainwashing your children while you’re not paying attention and letting the television babysit. https://t.co/y8awqSNcZ8

@Nickelodeon just lost my grandkids! No more watching the racist channel in my house and no more racist merchandise for birthdays and Christmas! https://t.co/P88BpTCJp9

The US has so many weird terms. Environmental racism is a very strange term.

“The US?” This isn’t some term that’s being used in the US except by a very small minority of the far left. Its use is hardly something unique to the United States, something you could determine in ten seconds with a Google search… if you could be bothered.

It’s a term that originates from the US and that I’ve only ever heard in context in the US. And yes a little googling seemed to refer the US for the most part. So no your criticism seems a tad presumptuous

Originates? Perhaps. However, that conclusion requires the ability to discern origin and expression.

I think you are right that all of this Critical Race Theory nonsense does originate in the U.S., and it is completely insane. What you can ponder, though, is how BLM and other CRT worshippers are bringing this destructive nonsense to the UK. I am endlessly amused to see BLM protests against slavery (!) over there. After all, the only slavery that ever happened ever in the history of the planet was in the U.S., and it was all African slaves (no Irish ones, for instance). It’s all a load of BS, and you do get that, so for that, I give you credit.

There is an element of it for sure. Its pretty localised, Statues and renaming seems to be the sum of it. The removal of historical characters for one aspect of there historical wrongs seems daft. It seems to be a form of whitewashing ie erasing the images of the wrongs of the past, which seems stupid why not acknowledge the past and discuss it?

Slavery has been pretty prevalent through the course of human history. Britain was guilty for a long time for sure, but banned in 1833. Random fact for you Britain paid for releasing all the slaves and took out huge loads to pay for it only just paid that bill in 2015 (I only found that fact out a few moments ago). Yes I’m a geek ha.

Well thank you Fuzzy, I appreciate that

Well, if we were to get technical and historical and stuff, the U.S. didn’t exist until it won its independence from the Emglish crown. Circa 1776, so all that pesky slavery stuff up until that date . . . not really the US, was it? I think that slavery stuff is on the UK, actually. After all, who owned the U.S. (such as it was, circa 1619, since the U.S. didn’t exist except as a British colony at that point)? Slavery was big business for you Brits, right? And we New World colonists were just British subjects then, so . . . yeah, I’m thinking you Brits are the racist pro-slavery lunatics. If we hadn’t won our freedom from you slave-trading racist Brits, we would never have broken free from your racist tyranny. And stuff.

Yeah, I’m pretty sure that the UK is the most onerous slavery-championing country ever. Look at all your colonist overrule. Where does the U.S. ever insist that the U.S. president is supreme and should be plastered on the colonized money? Oh, wait, never. You Brits colonize, we don’t. We leave a people to rule themselves, to have their own leaders’ faces on their money (and this is, of course, huge). We don’t colonize, we free peoples.

Your country is a disgusting, centuries-long defiler of human rights and freedoms. Deal with that, mark311, before you point your silly little finger at us. We are tens times the country your ridiculous, tyrannical disaster ever was. The sun never set on the British empire . . . until the people demanded freedom from the racist yoke of the Brits. Deal. WIth. Your. Own. Crimes against humanity and freedom. Before you dare point a finger in the direction of my country.

I thought “environmental racism” was Kermit singing, “It’s not easy being green.”

He was obviously exerting his green privilege, you Nazi!

/sarc (in case anyone was stupid enough to wonder)

An environment of diversity. A climate of deceit. The construction of a narrow frame of reference to entrap people, and force them to take a knee. Beg. Good girl.

Aren’t we yet getting close to where this Tower of Babel collapses?

It’s already collapsed, and we’re living under the rubble.

Nothing says racism like calling everyone but your a racist.

We turned off Nickelodeon more than a year ago because they would push all kinds of woke messaging. This is not new for them.

The fact is that the business that have potential or visible harm are almost always sited in areas where property is less valuable.

That is a wise business decision to limit costs. This occurs locally and nationally. The Federal government did the same. Why are the Army bases and AFB located where they are? Cheap land. Same for business.

It is economic not racism. That doesn’t mean that damage isn’t real. It does does mean no one sat around plotting a way to locate a pollution source based on race.

If the folks in the east coast and west coast want to get all hot and bothered how about construction of power generation in those blue States and cities? Maybe each State should be producing its own power instead of relying upon another State to pollute its air/water and then string transmission lines hundreds of miles.

How much energy is consumed v produced in NYC or SF or LA? While we are at it how about DC?

Here’s who to boycott, along with this putrid channel:

-The streaming service of ViacomCBS, Paramount+ (houses much of Nickelodeon’s library),

– Nickelodeon Hotels, which is in association with Karisma Hotels and Resorts

– Nickelodeon at Sea, in partnership with Norwegian Cruise Line.

Norwegian Cruise Line in business with Norwegian Jewel and Norwegian Epic liners, as part of Nickelodeon at Sea.

Vote with your pocketbooks!

Not surprised at all, wonder why it took this long