Netanyahu: Israel will “not cooperate” with the ICC in its “war crime” probe against soldiers involved in anti-terror operations. 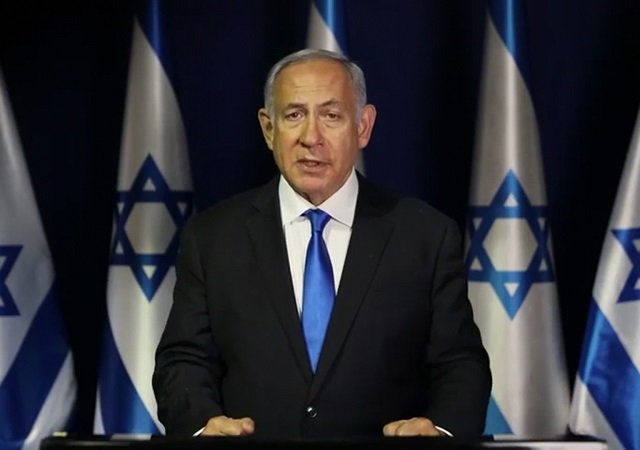 Prime Minister Benjamin Netanyahu is expected to tell the International Criminal Court (ICC) that it had “no authority” to proceed with its war crimes probe against Israel.

The letter to this effect will be sent to the Hague-based court, Israeli Prime Minister’s office said on Friday. Israel “expects the court to refrain from violating its sovereignty and authority,” the statement from his office read. Prime Minister Netanyahu’s government had agreed “to not cooperate” with the tribunal, the statement concluded.

The formal Israeli reply to the ICC is in response by the tribunal’s ruling in February to allow its prosecutors to open an investigation against member of the Israel Defense Forces (IDF) for carrying out defensive military actions against the Palestinian and jihadi terrorist groups.

The Times of Israel news website reported the prime minister’s response to the ICC:

Israel will tell the High Court of Justice that the court does not have the authority to probe alleged war crimes by Israel and Palestinian terrorists.

In its formal response to The Hague-based court’s decision to open the war crimes probe, Israel will say it won’t cooperate with the investigation, according to a statement Thursday from the Prime Minister’s Office.

“In the letter, it will also be noted that Israel completely rejects the claims that it is carrying out war crimes,” the statement said.

The Prime Minister’s Office said Israel’s stance has been made known to the court by “central countries and world renowned experts” and stressed the Jewish state is “committed to the rule of law” and capable of investigating itself.

In March 2020, ICC lead prosecutor, Fatou Bensouda, opened a similar “war crimes” probe against the U.S. troops fighting jihadi terrorist groups the Taliban and Al Qaeda in Afghanistan. Neither the U.S. not Israel are members of the tribunal, putting both countries outside the court’s jurisdiction.

Israel may not receive the same level of support from the U.S. as it did under former President Donald Trump. Earlier this month, the Biden administration lifted Trump-era sanctions and travel bans on ICC top prosecutor Bensouda and other officials. Bensouda is the driving force behind the ICC’s campaign to launch war crimes investigations against U.S. and Israeli military personnel engaged in war against terrorism.

While the Trump White House was willing to take the ICC head on for its attempts to prosecute U.S. servicemen who are fighting terrorism abroad, calling it a “kangaroo court,” the Biden administration has markedly shifted the tone. Secretary of State Antony Blinken called President Trump’s countermeasures against ICC “inappropriate.”

Not surprisingly, the ICC probe against Israel has been welcomed by Palestinian terrorist groups who are waging war against Israeli soldiers and civilians alike. In February, Gaza-based Islamic terrorist group Hamas praised ICC’s “credibility and integrity” for launching the witch-hunt against the Jewish State. The probe was “necessary steps to hold the Zionist war criminals accountable in international courts,” the jihadi outfit declared.

Israel should criminally charge the ICC with aiding and abetting terrorism.

National sovereignty is important. These international organizations are not above it.

We really should stop flushing good money into the US’s cesspool.

A more proactive approach to Palestine terrorist’s would be good, Starting with a DMZ zone created with a string of fuel-air bombs.

Every terror action should be met with widening the DMZ.

Good. Don’t give an inch or an ounce of legitimacy to the vile Jew-haters and supporters of Arab Muslim supremacism, totalitarianism and belligerence.

It’s time to hold the followers of the pathology-laden ideology of “Submission” accountable for their behavior.

The Dhimmi-crat Jew-haters will no doubt use this situation to continue to vilify Israel and attempt to dishonestly/fallaciously cast it as an alleged “oppressor.” To hell with these reprobates. They’d do it, anyway. That’s their goal — to absolve Arab Muslims of any personal responsibility for their willfully made choices in inciting Jew-hate and in continuing their perpetual campaign of belligerence against Israel, while vilifying Israeli Jews for possessing the temerity to resist Arab Muslims’ genocidal aspirations against them.

Fatou Bensouda comes from an Islamic Country, The Gambia which shares historical roots with many other West African nations in the slave trade, which was the key factor in the placing and keeping of a colony on the Gambia River, first by the Portuguese, during which era it was known as A Gâmbia and later taken over by the British.