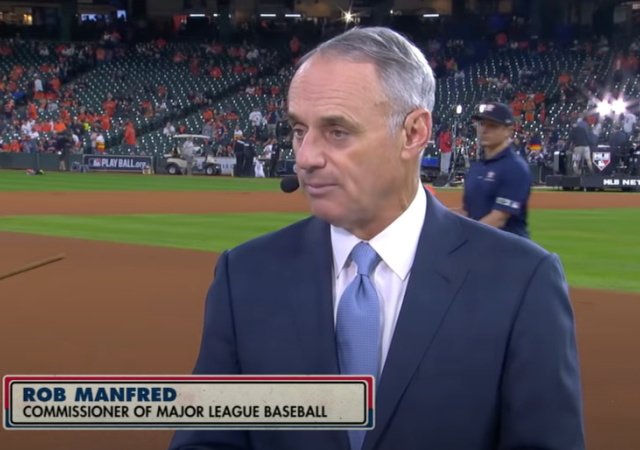 The league chose Denver, CO, to host the game. A city with only a black population of 10% and a state with voter ID laws.

Rob Manfred has been a joke since he took over for Bud Selig. He loves being a clown, doesn’t he?

You can’t make this up at all.

The left erupted because Georgia’s new law requires you to include your driver’s license number when you vote by mail. I wonder what it’s like in Colorado.

The left is all about diversity. Atlanta, GA, is a great diverse city! How about Denver?

Oh (emphasis mine): “All voters who vote at the polls must provide identification. If you are voting by mail for the first time, you may also need to provide a photocopy of your identification when you return your mail ballot.”

Colorado requires voter ID to vote in person — either a driver’s license, an IRS issued ID card, a valid passport, or a valid employee card with a photo. @MLB better be ready to explain why this is more acceptable than Georgia after that absurd political statement. https://t.co/QT1wDkTboY

Like GA, Colorado specifically outlaws electioneering/ campaign workers in campaign gear from handing out food and water to waiting voters.

In GA, anyone can give water/snacks to poll workers to distribute.

MLB is moving the allstar game to Colorado, which requires photo ID to vote in person, requires signature verification for mail in ballots (which Georgia got rid of), and prevents campaign workers from giving food/water to voters within 100 ft if they’re wearing campaign apparel pic.twitter.com/HwYByz0ye3

It was all for appearances. MLB really did not care.

I hope we all remember this next time they want voters to approve a Billion Dollars for a new stadium.

It’s why it’s called “virtue signaling“.
And the same voters who put 0bama, Biden, and Harris in the White House will gladly vote for someone else’s money to build that new stadium.

If the objective was to attract more African-Americans to baseball, they have (again!) failed miserably.

Yes, Colorado…the state that invalidated your vote for President by stating their Electoral votes will go to the candidate that wins the national majority. Literally taking votes away from “Blacks” (and all others!).

Colorado laws on voter ID,, not providing water, early voting, etc are not “racist” like Georgia laws because Colorado has fewer blacks to disenfranchise.

My long memory tells me how a new Colorado law back in the ’90s allegedly caused the reconception of a “Cheers” spinoff: “Frazier” was supposed to be set in Denver, not Seattle.

What goes around, etc…

This is a message to any state that would attempt to remove corruption from the election process. Colorado voting laws are already in place.

The Dems do not care about the many black-owned small businesses they hurt in Atlanta. This is about power and control – sorta like slave owners think…

And, Stacey Abrams may not be the dumbest person on the planet, but she had better hope that AOC has a long life.

Clearly, MLB is not about baseball as entertainment. MLB uses baseball as a tool for political power..

MLB….meh. Not the best decision to pull out of GA. They could have simply made the argument that this is a policy issue and ‘we play baseball, we don’t interfere in local policy decisions’.

They could have even stated the ‘work from the inside to make things better’ argument. Nope they simply condemned a set of policies in GA. Unfortunately for MLB these policies in one form or another are widespread. They can’t simply run away. If they do they will find that their replacement choice has some variation of the policy or even worse is much more restrictive than GA: see Delaware or New York.

Once the Dems turn a state blue, the laws don’t matter because the voting doesn’t matter. Would you really want to board an airplane with a corporate mentality that never READS anything just “FEELS”. Note to Delta and American…. your aircraft are flown by the book not by feel.

. . . and your Kansas City Monarchs jerseys.

This is how they’ll likely spin the choice of Colorado: The Rockies were one of the finalists for the 2022 all-star game, along with the Cubs and the Rangers (the Dodgers got the nod). So Manfred can just say that Colorado had already been vetted last year. Easy peasy. They certainly weren’t going to put in in Texas, and MLB has something against putting it in Wrigley (haven’t hosted since 1990).

But it’s safe to say MLB brass were already talking with other teams behind-the-scenes before they pulled the plug on Atlanta, so I’m sure the Rockies, city officials, and state officials had already done most or all of the pandering they needed to do to get the game moved there.

I wandered over to the Denver Post’s website earlier and the comments overall are about much what I expected: A lot of “Haha! Stick it, Georgia!” from posters who have no idea what Colorado’s election laws are nor do they care.