We may never know how much damage Swiss billionaire and leftist mega-donor Hansjörg Wyss’ “philanthropy” has really caused our republic. 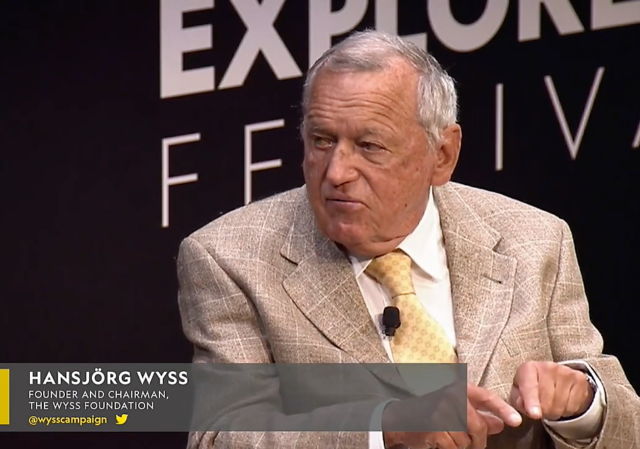 New York Times reporter Ken Vogel recently revealed the efforts by Swiss billionaire and leftist mega-donor Hansjörg Wyss to purchase the parent company of the Chicago Tribune and other failing newspapers around the country. It’s laudable to see such genuine investigative journalism—especially since it likely led the billionaire to withdraw his $100 million bid. When so many framed Wyss as a liberal white knight bent on saving a venerable American industry, the reality couldn’t have been more different.

The Swiss-born Wyss made his fortune as the head of Synthes USA, a major medical implants and biomaterials manufacturer he built from practically nothing and sold to Johnson & Johnson in 2012 for $19.7 billion. Today, Wyss is worth an estimated $8.5 billion.

Yet his success is marred by ghoulish controversy. In 2009, Synthes USA—with Wyss at its head—was charged by Philadelphia’s U.S. attorney with running an illegal clinical trial on humans: Injecting them with a cement that turns to bone inside the human skeleton. The Food and Drug Administration (FDA) reportedly told the company not to use the cement during spine surgeries. Synthes ignored the warning, and five people died as a result.

Four of Synthes’ top executives were ultimately sentenced to prison. One wonders if liberal billionaire privilege saved Wyss from sharing the blame—he wasn’t charged by prosecutors—but he’s been accused of purposefully ignoring clinical trials and of being a “hands-on,” “forceful,” “800-pound gorilla” who allowed little dissent in the ranks.

Despite his highly questionable ethics, Wyss is beloved among activists as a major donor to left-wing causes through his Wyss Foundation (2018 assets: $2.2 billion). Yet far from practicing old-fashioned philanthropy, the Wyss Foundation is as political as they come—just take its ties to the $731 million “dark money” network run by Arabella Advisors in Washington, DC.

Arabella runs four in-house nonprofits, all of which specialize in attacking Republicans, tilting elections, and passing radical legislation. Each of these nonprofits manages a host of “pop-up” groups, websites designed to fool viewers into believing they’re grassroots activist groups. To date, Capital Research Center has identified hundreds of such “pop-ups.”

What’s clear after studying this network over the past two years is that it’s the height of professional left-wing activism. When a donor goes to Arabella, they’re expecting a political payoff.

The Wyss Foundation has funneled nearly $57 million into the New Venture Fund, Arabella’s flagship 501(c)(3), since 2009.

Little is known about how that money was spent. But a 2015 document created for the Wyss Foundation outlines a plan for a “communications hub”—intended to support the foundation’s “core issue areas,” “drive measurable change,” and achieve “significant wins” “leading to implementation of policy solutions at the local, state, and federal level”—which is strikingly similar to an existing Arabella group, the Hub Project.

Politico reports the Hub Project aided Democrats on “health care, taxes and the economy” in the 2018 midterm elections. The Atlantic cheerfully credits the Hub Project with doing “remarkable damage” to President Trump’s reputation among Wisconsin voters in the lead-up to the 2020 election. In April the group hired a campaign director whose last job was flipping the Senate in 2020 for a top Democratic PAC.

Yet because it’s a project of the Arabella-run Sixteen Thirty Fund, the Hub Project doesn’t disclose its funding and budgets or file Form 990 reports with the IRS. Arabella’s activism is the very definition of “dark money” that so many liberals claim to dread.

Arabella’s darkness also obscures just how much Hansjörg Wyss—a would-be media magnate who could use the Tribune to influence election outcomes—poured into this partisan group. Wyss has done it before: In 2019, his foundation granted $1 million to States Newsroom, a bundle of partisan attack sites posing as impartial news outlets that was spawned by Arabella.

Add to that this foreign national’s track record of meddling in American elections, contributing $41,000 to Democratic PACs in violation of the federal government’s strict ban on foreign nationals giving to U.S. political campaigns.

What could he do with one of the nation’s most powerful newspapers at his disposal?

Just four years ago, the threat of foreign nationals influencing our elections through fake news outlets was the worst conceivable horror on Earth. It’s liberals who should have been the loudest opponents of Wyss’s efforts to take over the media. So where were they? With the powerful exception of Mr. Vogel, they were nowhere to be seen.

We may never know how much damage this foreign billionaire’s “philanthropy” has really caused our republic. But what should be obvious is that, to the Left, politics is philanthropy—and if liberal billionaires get their way, it’s coming to a newspaper near you.

Hayden Ludwig is a Senior Investigative Researcher at Capital Research Center. He is also a columnist at the Washington Free Beacon. Ludwig is a native of Orange County, California, and holds a Master’s of Public Policy from George Mason University. This article originally ran at the Capitol Research Center website, and is reprinted with permission.

With a dash of Mengele.

And he’s apparently one of Jackson Hole’s billionaires, the people who made that area too leftist and too expensive for respectable millionaires.

That “cement” cost more than 5 lives…The complications were many.

Great, a guy who wants to play God – even using cement in human guinea pigs. Perfect poster child for the loony Progressive Marxists.

The seeming ease with which people with tons of money to affect “free and open elections” is a direct threat to democracy.

Being ruled by laws, rule of law as it’s commonly understood is not able to protect individuals from an oppressive majority. The courts have to respect it, and In his Constitution of Liberty, it’s not enough to have laws and statutes on the books. Sure, people who don’t obey them I’ll suffer consequences, but the main arguments should not be those that treat particular laws, voting in an up or down fashion; rather the arguments need to be those which decide should be in the first instance.

Democracies can be as oppressive and as corrupt as straight out authorities regimes.

Did anybody here participate in any vote giving consent that the best way to insure individual freedom is simply by counting heads? I was not asked.

Maybe the Founders believed the 9th and 10th amendments would provide protection. Have they?

I don’t know enough to say how federalism died, but I think it is dead.

If there is any method, any institution, to protect citizens from overweening intrusions into day to day lives, I do t know what they are.

“what forms those laws should take.”

Moneyed people are working overtime buying politicians is my view of the situation.
High time we had a wealth tax on anyone with over a billion dollars net worth. Say 20%, maybe more. Depends on how much they want to steal our freedoms.

Just what we need, more banks telling their customers what to do.

why are foreign citizens allowed to set up tax exempt political organizations to destroy our country? do all of people in D. c. favor Suicide for the country?

These kinds of human debris could not function in a uncorrupted society. Our govenment, our schools, our media – all are corrupted.

Secession is our only hope. America is too far gone.