The judge did not dismiss on the merits. He dismisses the case because the two transgender female athletes and two of the four plaintiffs graduated. 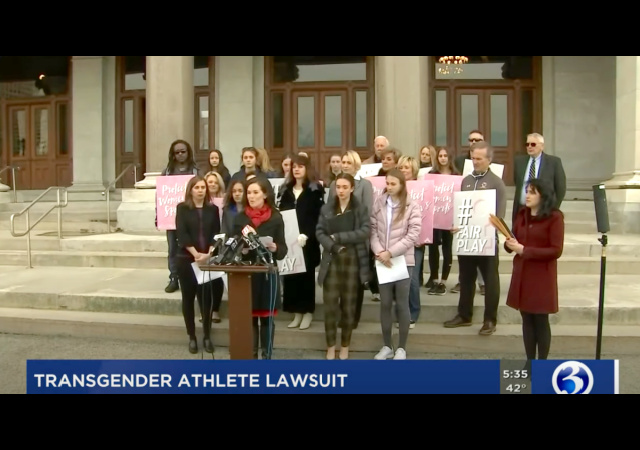 But Chatigny’s ruling might not hold up due to a recent SCOTUS decision.

From The Hartford Courant:

“I conclude that the plaintiffs’ challenge to the CIAC policy is not justiciable at this time and their claims for monetary relief are barred and dismiss the action on this basis without addressing the other grounds raised in the joint motion,” Chatigny wrote in a ruling released Sunday.

Chatigny stated that because the two transgender athletes, Terry Miller of Bloomfield and Andraya Yearwood of Cromwell, have graduated and the plaintiffs could no longer identify any other transgender female athletes, there was no further dispute to resolve.

“I conclude that the request to enjoin enforcement of the CIAC policy has become moot due to the graduation of Yearwood and Miller, whose participation in girls’ track provided the impetus for this action,” he wrote. “There is no indication that [two of the plaintiffs Alanna] Smith and [Ashley] Nicoletti will encounter competition by a transgender student in a CIAC-sponsored event next season.

“Defendants’ counsel have represented that they know of no transgender student who will be participating in girls’ track at that time. It is still theoretically possible that a transgender student could attempt to do so. Even then, however, a legally cognizable injury to these plaintiffs would depend on a transgender student running in the same events and achieving substantially similar times. Such ‘speculative contingencies’ are insufficient to satisfy the case.”

So Chatigny left open a possibility for the plaintiffs to bring forth “a new challenge if additional transgender athletes were to compete during the coming year.”

Athlete Chelsea Mitchell said: “It’s discouraging that the court ruled to dismiss my right to compete on a level playing field. Today’s ruling ignores the physical advantages that male athletes have over female athletes. Female athletes like me should have the opportunity to excel and compete fairly. No girl should have to settle into her starting blocks knowing that, no matter how hard she works, she doesn’t have a fair shot at victory.”

So if other transgender females try to compete then Alanna Smith and Ashley Nicoletti, both juniors, can file another lawsuit.

Chatigny also did not revise “the placement of Miller and Yearwood in races they ran.” He did not award any monetary damages to the plaintiffs.

Students who sue lose their “standing” after they graduate.

However, Chatigny’s ruling might not hold up thanks to a SCOTUS decision in March.

In 2017, a student sued his school for allegedly violating his free speech rights. The case lingered and the student graduated.

SCOTUS ruled on the case on March 8. From Professor Jacobson’s post:

The U.S. Supreme Court issued an Opinion authored by Justice Thomas on March 8, 2021, in the case, with the issue turning on whether someone who claimed only “nominal” damages was able to sue. The Court held that such a free speech denial was actionable, with only Chief Justice Roberts dissenting.

Justice Thomas and seven other Justices agreed the student could maintain the lawsuit. From the Thomas majority opinion:

At all stages of litigation, a plaintiff must maintain a personal interest in the dispute. The doctrine of standing generally assesses whether that interest exists at the outset, while the doctrine of mootness considers whether it exists throughout the proceedings. To demonstrate standing, the plaintiff must not only establish an injury that is fairly traceable to the challenged conduct but must also seek a remedy that redresses that injury. And if in the course of litigation a court finds that it can no longer provide a plaintiff with any effectual relief, the case generally is moot. This case asks whether an award of nominal damages by itself can redress a past injury. We hold that it can.

It seems that ant controversy which might be “mooted” by running out the clock provides too easy an out for the judges. They know the circumstance can recur, and the issue should be addressed, but are too afraid to tackle it.

No. You fundamentally misunderstand the role of the courts. Judges do not decide cases when there is no real interest at stake any more. LEGISLATURES decide those types of questions. Nowadays, everyone wants the courts to decide all political matters. Both left and right, by the way, and then they condemn the courts when the courts stay in their rightful lane, and refuse to decide what are essentially political matters. Here, the state legislature should address the abomination of transgender athletes, and ban them. However, everyone is so lazy these days. No one wants to do the work of being a citizen. So we all sit home complain and do nothing, rather than complain like hell to the legislatures, who are supposed to have the real power in our system.
It is a very good thing when courts refuse to be legislatures. That is what conservatives have been fighting for for years. In this case, the issue as to these plaintiffs simply ceased to exist on their graduation. So there is no more LEGAL case. There is still a POLITICAL case, and people had better start getting involved in being citizens again and pressure legislatures, rather than demand the Courts do everything.

The claim in the case is that the Connecticut Interscholastic Athletic Conference’s transgender policy is in violation of existing federal law – Title IX. The athletes were not asking the court to legislate, they were asking the court to enforce existing law as they understood that law.

Nope, it is fredx3 that doesn’t have a clue. The judge ran out the clock on this case and did so purposely. The suit was filed well over a year ago, and was still valid regardless of the graduation occurrence.

This is just another activist judge pushing the destruction of the established culture in this country.

The only cure is for a bunch of male track stars to feel like women and compete against the losers pretender to women and beat the stuff out of it.

Oh so this is why people hate lawyers.

If time heals all wounds why have judges? Why, that murderer killed his victim 20 years ago! No need to prosecute him, he’s old now and the victim has been gone all this time!

Pathetic newow for these judges.

Courts are not supposed to decide all issues in our system. You simply wanted a court to make a political decision that you wanted. The Court refused to make any decision, because if nothing is at stake here, there is no longer any case.
A few weeks ago, as the article above indicates, the Court made a very bad decision, written by Justice Thomas. Although he is a great judge, he goofed in that decision. Because under that ruling, ANY case, no matter how dead, can be resurrected by simply claiming you want “nominal damages”. That is, you want the court to award you a symbolic one dollar in damages. Justice Roberts warned that this would distort the legal process, because the courts would no longer be able to get rid of conflicts that no longer existed. All you had to do is claim you wanted your one dollar in damages.
The writers here at legal insurrection point out, quite rightly, that all these girls need to do in future to make sure the court is forced into making political decisions is ask for their one dollar.

The political decision was made years ago. It is the courts that are required to settle disputes of the law.

fredx3 just likes the decision, wants little boys with mental issues to compete with the girls. That’s the only political part here.

The judge is just another activist judge, intent upon the destruction of the rule of law and the culture of our country.

Which has then been said. Just keep bringing cases, is the expressive point.

The solution is for all the higher performing boys to all enter as trannies when this happens to ensure the individual causing the problem does not accomplish what they sought.

In some meets you might see the entire boys teams from both schools doing this and freeing up the boys field completely for the females to do the same. That’s what modern chivalry looks like.

Interesting thought, but unfortunately, flawed. The reason the lower performing boys want to play with the girls is because they can’t play with the boys. If all of the other boys pretended to be girls, the low performers would just revert to the (now less competitive) boy’s sports. Still no home for girls.

I have no skin in this game, but I can’t wait to hear the crying from ONE Liberal friend. I am going to laugh in their face, and tell them they voted for this. I hope some LeBron James bodied guys take over Soccer so we can retire the hateful little blond boy that kneels on the girls team now.

Time doesn’t erase all of the effects of testosterone. Once the body habitus is created by the hormone, that can’t be altered. Male pelvis superior to female pelvis for running as an example.

It is easier than that.

Or, we could just check below the belt: Yep that one has a dick, he competes with other boys.

See how easy that is?

The court is merely following the Donald Trump Litigation Standard:

Not yet. Not yet. Too late. Gee you’re slow.

Not transgender. Homosexuals do not enjoy disparate advantage from their divergent sexual orientation. Not even neo-masculine, since the physical advantages are not conferred to the female sex on an equal basis. This issue is limited to neo-feminine individuals or male sex, who have structural advantages, including: lung capacity, musculature, bone density, etc. Trans-social issues, including cross-dressers, are a separable category of divergence and progressive conflict.

That said, society has compelling reasons to discern and normalize a favorable juxtaposition of the sexes: male and female, and sex-correlated gender (i.e. physical and mental attributes): masculine and feminine, not limited to physiological differences in physical competition.

too bad there isn’t an WNFL

Perhaps the solution is to do away with “men’s” and “women’s” sports. Instead we have the “penis league” and the “vagina league”… in other words, we don’t care how you identify, we care what equipment you bring to the game.

I know about that, but at the high school level anyway, that isn’t an option and will at least protect our kids.

When Gladstone and MLK said that “justice delayed is justice denied,” I wonder if cases like this where it was so literally true occurred to them?

Empowering mental illness, to the detriment of others.

It’d hurt, but if I was on a school board deciding where money went, sports would be cut off totally all the while making it crystal clear losing sports was completely due to transgenderism.
Hopefully it would make the transgenderists (probably making up words but y’all understand I’m sure) shiver in fear that every male athlete would be so ticked off that being out past dark might unhealthy for a certain subset of sexually confused idiots.

I am just waiting for a woman to stand up in the starting blocks after the gun, take off all of her clothes, and wave a banner that says, “This is what a woman looks like.”

They strip down for every other cause, but here it would actually be relevant for a change.