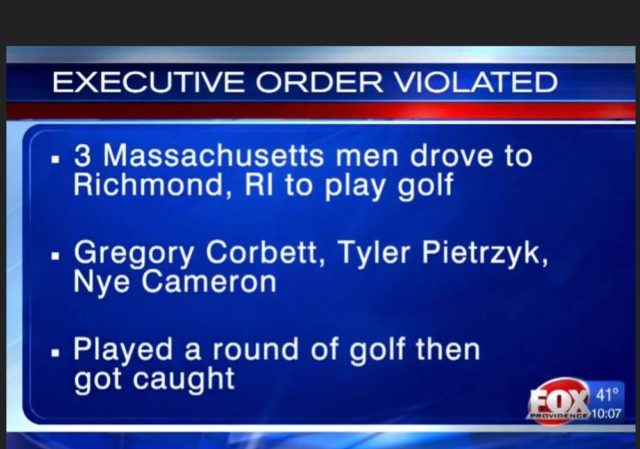 About a year ago, Legal Insurrection published an essay I wrote titled Golf Can Be An Act of Civil Disobedience During the Coronavirus Crisis.

After almost everything closed in Massachusetts in March of 2020, there was little to do recreationally-speaking. One exception was golf. Driving ranges and courses remained open because they are outdoors and, ipso facto, socially distant.

Soon enough, however, Coronavirus hysteria claimed golf, too, and from the end of March and all of April everything related to golf was shut down. Yet neighboring Rhode Island kept its courses open, and Massachusetts golfers sought the opportunity to play where they could. Rhode Island caught on quickly and banned out of state play.

The inevitable happened within days. Three Massachusetts golfers were arrested when they met a friend from Rhode Island, who took them to play. I was unable to learn the fate of these desperados, but I’m guessing they were asked to pay a small fine and that’s where it ended.

Within Massachusetts many began thumbing their noses at the stay at home orders, too. Players were sneaking onto public and private courses, and police found it hard to warn them out.

To me, the act of golfing, whether in or out of state, was a growing form of civil disobedience. I was proud of my fellow golfers who would not be denied their right to triple bogey a short par three. I was proud of myself for bringing attention to precious liberties, such as freedom of movement and the right to assemble. I was proud I was able to link Henry David Thoreau’s landmark essay “Civil Disobedience” to my favorite pastime.

After my essay was published and interest died down, I remember feeling events were moving so quickly the argument I made would soon become only the quaint, cute cry of a citizen who still had some faith in appeals to just causes. How correct and naïve I was.

Over the course of April and May, more restrictions and conditions on movement were put in place, in addition to the implementation of mask mandates. Civil disobedience, golf course play or otherwise, had not yielded any results.

But who could see coming what happened at the end of May 2020? George Floyd died in police custody on May 25, 2020, and everything we knew about protest changed overnight. At this point, a new brand of civil disobedience was established: if you were marching against police brutality and systemic racism, in violation of gathering edicts, that was permissible (and lauded) and not a lethal undertaking. Play golf, or, worse, rally to save your business, and you were a moral reprobate and a super-spreader.

My charming observations about golf and civil disobedience at the beginning of April 2020, already feeling passe, lay in absolute ruin as the coming months passed.

Double standards will always be with us, but the other side used to at least pause before flouting them. The Black Lives Matter protests, no matter how worthy in spirit, proved you could hold two contradictory opinions at exactly the same time and not display any shame about the intellectual pretzel into which you had twisted yourself.

An important corollary to recognizing and judging soberly your own speech is listening to what others say. Civil disobedience is often a method employed to prick up ears, but when the opposition covers its own and labels you a “dupe” or an “agent” of something nefarious for speaking, is the tactic of civil disobedience useful any longer?

And it gets worse than simply not listening. The Left, more than ever before, uses its powers of cancellation to frighten those who might employ the unacceptable kind of civil disobedience. Big tech and government censorship have made it harder for those who would arrange, announce and report on acts of civil disobedience to do so. The Capitol remains surrounded by razor wire and the National Guard. Surely some of the current Congress’s bills would have engendered rallies or protests, but under the guise of ‘we can expect an attack any day now,’ no one can get to the most important place one should go if one wants to practice civil disobedience—or even have a legally permitted march!

In my April 2020 essay, I concluded by quoting Thoreau in “Civil Disobedience” when he wrote, “I was not born to be forced. I will breathe after my own fashion. Let us see who is the strongest.”

Today, Thoreau’s words are empty. Not empty because they aren’t a grand aspiration and boldly uttered—but because anyone who believes in those words has lost. We have been forced. We cannot breathe in our own fashion. We were not strong enough.

In 2020 and 2021, on multiple fronts, Democrats smelled blood in the water and wanted to ensure the fundamental transformation of America Barack Obama promised. And what are hundreds of hypocrisies and double standards if progressives’ could shift the landscape of American politics irreversibly to the left? Once there was no backlash to be feared over the reaction to the two types of civil disobedience occurring early on in the pandemic, the Left never looked back

Is it is bleak as all that? As I’ve written elsewhere, golfers are eternal optimists. If you have a poor round, you will play better the next time. If you have a good round, your next one will be great. Many complain about the game’s difficulty, but few give in.

The citizen in me feels we may have turned a corner, but the golfer in me –the optimist—says no.

With the Derek Chauvin trial upon us, I fear (if he is acquitted or convicted of only a minor charge) yet another brand of civil disobedience: the government-sanctioned riot. We’ve already experienced this to some degree, but it might make what happened this past summer seem like a small disturbance.

But then there’s the golf course where, last time I checked, you don’t have to produce a vaccine card to play and your race doesn’t determine your tee time. Perhaps golf can be the uniter everyone seems to pine for.

Going a little further I might ask: can golf, in some way, push back on the push back? If it was reasonable to believe civil disobedience to coronavirus lockdowns began on the golf course, might it not also be reasonable to believe the counter revolution to what we are going through could start on the links?

If I were to begin my essay from last year now (in April of 2021), even with all the evidence for pessimism arrayed before us, I still might look to golf for an answer. Like a ball hidden in deep rough, you know it’s there though you can’t see it from a distance. But you will find it, and even with a difficult play forthcoming you will take that hack . . . and hope.

Randy Steinberg lives in the Boston area. He has a master’s degree in film/screenwriting from Boston University. He has been a film and television reviewer for Blast Magazine.com since 2011. He has published golf essays in Sport Literate and Aethlon: the Journal of Sport Literature. His golf handicap is 8.

I work for the police department. My office is right behind the front desk and the door between us is always open. Before COVID, listening to the officers at the front desk deal with people coming in who are emotional/angry/batshi*t crazy was my entertainment that helped make the time go by quickly.

Since COVID struck and our lobby closed, the entertainment is listening to the often exasperated officers dealing with the public on the phone. That and listening to Bruce Willis’s mother, who volunteers answering the phone, and who is quite a character, talking to the public in a way which sworn officers are not allowed to do.

Two of my favorite recent, long, drawn out calls involved COVID. Neither would stop badgering the officer to do what they wanted.

One was a woman complaining that she had just driven by a group of four people standing on a street corner not social distancing. She wanted officers to go and arrest them immediately.

The other was a woman insisting we send out a car because her neighbors, the family next door, were in their backyard and not wearing masks! I kid you not.

I’ve chuckled as crazy people have come to our front desk in the past; the elderly woman who claimed she just robbed a bank. The woman who would come in every week and claim she’d just been raped, always by a different man she could never describe well. The man who claimed he had worked for years for the CIA who were now trying to kill him. The woman who claimed voices were coming from her cellphone … when the officer asked, “Someone is repeatedly calling you and harassing you?” she replied, “No, the phone is harassing me.”

I could go on and on. But recently I see that outside of the obviously mentally ill who constantly pester our officers, a not unsubstantial portion of the general population is susceptible to paranoia and complete irrationality depending on unusual social circumstances, such as COVID.

History teaches us that human nature is a constant so I shouldn’t really be surprised. Nonetheless it’s shocking to see how otherwise sane people can become during a period of unfamiliar conditions.

I’m to the point where I’m perfectly willing to say “Arrest the people calling in complaints about failing to kowtow to these unconscionable diktats (or failure to cower in fear before a virus that just doesn’t kill all that many people who catch it)”. They’re wasting police time.

First they came for the golfers …

Come to Florida!
Our golf courses never closed even during the worst of the pandemic.
Outdoor shooting ranges were also never shut down.
Business here is booming, restaurants, beaches, shopping malls, theme parks are all open and packed.
Hospitals have plenty of empty ICU beds and all the elderly who want to have all been vaccinated.
Florida Governor Ron Desantis for President in 2024!