Even Snopes debunked their conspiracy theory. 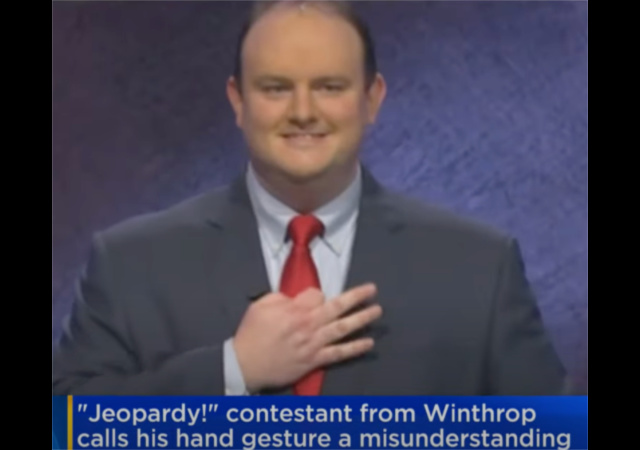 Yes, the hand gesture in the above photo is supposedly a white power sign:

Tuesday, April 27, was a more widely felt misstep. During his on-camera introduction, Kelly made a gesture with his hand that he has since claimed was an indication that he had won three games. He had, on previous episodes, indicated with one finger and two fingers that he had won one and two games, and no reasonable person would have interpreted those gestures differently. However, this gesture was not a clear-cut symbol for the number three. He held his thumb and forefinger together with his other three fingers extended and palm facing inward, and he tapped his chest. This, whether intentional or not, resembled very closely a gesture that has been coopted by white power groups, alt right groups, and an anti-government group that calls itself the Three Percenters. In a public Facebook post that has since been deleted, Kelly states, “That’s a 3. No more. No less.” His public Facebook profile also featured a cover photo of Frank Sinatra making a similar gesture. This was either erased or made private on Wednesday morning, along with hundreds of public comments on his few “Jeopardy!”-related posts. Regardless of his stated intent, the gesture is a racist dog whistle. Some of the first people to notice this were not affiliated with “Jeopardy!” in any way — they were viewers who couldn’t believe what they’d seen, captured it on video, and shared it to Twitter. Among them were people of color who, needless to say, are attuned to racist messaging and not appreciative that the show allowed this symbol to be broadcast.

The group also complained that Donahue “has not publicly apologized for the ramifications of the gesture he made.” They imply he meant it as a racist dog whistle because if they “misconstrued” the gesture then he should apologize and “disavowal of any connection to white supremacist doctrines.”

Guess what he. Donahue did just that on Facebook.

Snopes even debunked this stupid conspiracy, especially since he didn’t make the gesture in the “OK” sign people have made a white supremacist sign now:

We note that in this case, Donohue wasn’t even necessarily making the “OK” gesture because his palm was facing his chest and his thumb and forefinger appeared to be tucked in:

In context, it appeared to be nothing more than a gesture signifying his status as three-time winner, and there was never any evidence offered to the contrary. However, on April 29, Donohue posted a statement on Facebook in which he stated, “I reject and condemn white supremacy and all forms of bigotry for the evil they are,” and added, “I deeply regret this terrible misunderstanding.”

Even the ADL said people shouldn’t assume people are using it as a white power sign “unless other contextual evidence exists to support the contention.”

The former contestants also had a problem with Donahue answering a clue with the word Gypsy instead of Roma or Ramani.

You’ve gotta be f-ing kidding me.

I have a white power sign for them, my middle finger.

He should tell them to pound sand.

Not should. Must. Never ever apologize to these chuckleheads.

Exactly. The alternative is to take a knee, beg, good boy.

Contestant: “I’ll take libel and defamation for $1,000, please.”
MC: “These people levy senseless and baseless charges against white people to stir up hate and discontent to increase their political power.”
Contestant: “What is a liberal?”
MC: “No, I am sorry. That is incorrect. The correct answer is, “What are liberals and Democrats?”

And I heard that in Alex Trebeck’s voice and timbre. =o(

These trivia spouting morons need to get over their bad selves. It’s not a white power sign, you chuckleheads. If it is, you need to censure Lebron James while you’re at it.

Tell that to Anita “Mao Is My Hero” Dunn, who occupies a position of great power in the Demented/Ignorant Slut administration.

Last weekend we watched the documentary “For the Love of Spock” on Netflix.

In explaining where the Vulcan hand gesture for “live long and prosper” came from, Nimoy said he’d observed his father among others using the gesture during Temple, which he understood was a sign for the Hebrew letter “shin”. The significance in the Hebrew language / to Temple goers – is that “shin” is the first letter in Shaddai – or the name of G-d Almighty (El Shaddai).

It strikes me that the hand gesture for the Hebrew letter “shin” looks remarkably like the english letter “w”.

So how soon before the progressives/cancel culture crowd come for Spock and the “shin” hand gesture? Was Nimoy flashing a (Vulcan) white power sign back in the 60’s?

These idiots who declare Buckwheat to be racist

The character or the flour?

“The character or the flour?”

Is it time to cancel Eddie Murphy?

If you can hear the dog whistle, you’re the dog.

This is a line in the sand issue, the ok symbol is not a white supremacist symbol and it never has been the leftist media arbitrarily declared it was when an aid to a supreme court justice nominee used it to show her support for the judges confirmation.

We need to stop letting the left control the culture and fully push back.

OK. through today [and back on April 27] Anderson Cooper is/was the guest host on Jeopardy. Whiter-than-Albino-White Anderson Cooper. Lefter-than-Trotsky-Left CNN Demi-god Anderson Cooper. And given that it is White Leftists who scream the loudest about racism against anyone who actually does the work entailed in a task [like actually winning Jeopardy], surely we can blame him for creating an atmosphere where racism is encouraged. Use their own rules against them. /very limited sarc

To the 450 prior contestants:

Ignorance can be educated, Crazy can be medicated, but there ain’t no cure for stupid.

Oh yes, there is. 150 grains of a dense metal, delivered at high velocity.

I was thinking a .22 short through the left or right ear. Does the job, but never leaves the skull. Saves a lot on cleanup.

Also, the montage on the news channel refused to show him holding up three fingers. Guilty as charged, I guess. Can’t be showing a guy holding up 3 fingers to signify his 3rd win on a game show. That would be racist!

These people are so dumb. That looks nothing like the “WP” symbol! It’s obvious he’s making the “3 percenter” symbol!
(/sarc for the slow people out there)

If he said, “Seig Heil!” and raised his right arm in the Nazi salute, we’d have something.

So would I. Then, pester their employers to fire them, just like the leftists do to those expressing their view of wrong-think.

He shouldn’t have responded at all. .

People like this who create problems where none exist really piss me off sometimes.

While these morons obsess over non-problems, the rest of us are dealing with things like births, deaths, cancer, remission, lost jobs, and new careers.

I often wonder if this sort of hypersensitive behavior over what amounts to nothing is way for some people to avoid the harsh realities of the world (while simultaneously missing out on the finer things in life).

I think a lot of it is their up=bringing. Participation trophies, every child an honor student, helicopter parents. Another thought: it may not be related but I think it may be: too much leisure time, especially in their youth. Minimum wage laws and paperwork burdens on potential employers means the kids can’t find jobs like sweeping out the store after school, or, the 21st century version of jobs like paper routes. The kids aren’t seeing a correlation between work and reward, whether it is pushing a broom to afford the new (latest gadget), or getting top grades just for showing up.

Remember the gentleman who got into trouble for being the first person to stop applauding when Stalin spoke? This is quite similar.

When they call, they start off with an ad hominum accusation “Hello, Mr. Smith. I suppose by now you heard about the racist Nazi who appeared on Jeopardy” and transition to an appeal to peer authority “Many other Jeopardy winners have gotten behind our campaign to shame this disgraceful individual” then a concealed threat “I’m certain you’re willing to add your name to theirs” (with a hidden ‘or else’) And once they get even grudging acceptance, the bail out before they say something to backtrack. “Thank you, Mr. Smith. I’ll pass your name along to add to the others, and you have a nice evening.”

“an anti-government group that calls itself the Three Percenters.”

A pro-constitution philosophy with zero racial agenda that calls itself the Three Percenters. FIFY.

Unlike Antifa, III is really a an idea, not an organization.

Compare to the Crying Boehners, or the backstabbing Bushes and Romneys, or the corrupt McConnells.

How stupid are we to continue to tolerate these rino hacks running OUR political party?

GOP Chair Ronna McDaniel May Be Sabotaging The Trump Campaign And Administration
https://toresays.com/2020/05/09/gop-chair-ronna-mcdaniel-may-be-sabotaging-the-trump-campaign-and-administration/

I know my mother will never get over it.

Just when you think that the vile Dhimmi-crats’ are incapable of plumbing lower depths of manifest stupidity and infantile, vindictive spite, they prove you wrong.

This is a beautiful story. It shows the contempt that the media has for its’ audience. If there is still anyone left that believes the media is here to keep you abreast of facts than I think we should lobotomize you. “Frontal lobe be gone!”lol.