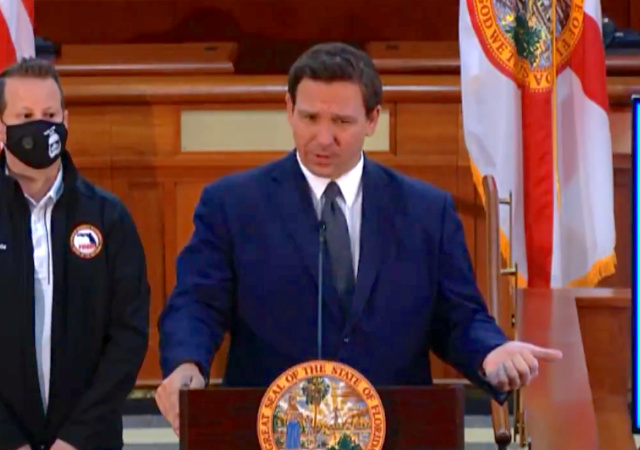 I have noted that any Republican politician with any presidential aspirations should #Resist the current administration quite vigorously.

So far, Florida’s Governor Ron DeSantis has been the #Resistance leader. He continues with his defense of one of the critical industries in the state.

Florida Gov. Ron DeSantis announced Thursday a lawsuit against the federal government over the cruise industry shutdown during the COVID-19 pandemic.

Tens of thousands of Floridians depend on the cruise industry for their jobs, DeSantis said at a news conference at the Port of Miami, where he announced the lawsuit while flanked by cruise employees.

“So, today’s a day for us to fight for them, to fight for our friends and our neighbors, who just want to go back to work,” DeSantis said at the press conference.

The Centers for Disease Control and Prevention issued new guidelines last week for companies on how to respond in the event of COVID-19 cases but has so far not lifted its no-sail order.

The lawsuit says the new guidance doesn’t take into consideration another CDC statement made that fully vaccinated people can now travel at low risk to themselves. It also says the new rules increase the frequency of reports of COVID-19-like illnesses and require agreements be made between cruise companies and all U.S. ports and local health authorities where ships have to dock.

With vaccinations currently being distributed and the national reproduction number at one, the time for draconian measures is over.

DeSantis said the no-sail order is outdated and hurts the state as the industry generates billions for the economy and employs tens of thousands of Floridians.

“We don’t believe the federal government has the right to mothball a major industry for over a year based on very little evidence and very little data,” the Republican governor said at a news conference at the Port of Miami.

The Cruise Lines International Association (CLIA) is also making a plea for the US to reopen ports, as some lines are already canceling sailings as the shutdowns continue.

Nearly half a million workers and tens of thousands of businesses in the U.S. are “continuing to financially suffer” following the cruise industry shutdown, CLIA said in a statement on April 5, making a renewed call for the lifting of the CDC’s latest order.

Since cruising was halted, Florida’s seaports have recorded a loss in operating revenue of almost $300 million. This figure is projected to reach nearly $400 million by July, according to the aforementioned Federal Maritime Commission report.

Several cruise lines have canceled their U.S. cruises due to the industry shutdown, including Carnival Cruise Line and Disney who both announced cancellations of U.S. sailings through June on Tuesday.

Christine Duffy, president of Carnival Cruise Line, said the company “may have no choice” but to pull out of voyages from the U.S. altogether due to the CDC order blocking cruises in U.S. waters.

CLIA stated on Monday: “More sailings originating in the Caribbean and elsewhere are likely to be announced, effectively shutting American ports, closing thousands of American small businesses, and pushing an entire industry off-shore.”

Hey, can’t they all get jobs in the green/ solar industry

Heck, our Trans secretary says there will be 19 million new jobs created with the passing of the transportation cultural BLM bill!

Oh, him. When you said “Trans secretary” I was thinking of somebody entirely different.

I paused a moment myself.

It’s incredible to me that we’re not seeing retrospective analyses on how the economic misery that is plaguing working-class Americans and small businesses (but, not major corporations, such as Amazon) as a result of the Wuhan virus is entirely self-inflicted, the result of the vile Dhimmi-crats’ choice to politicize Wuhan virus for self-serving political gain, and, of course, their obnoxious, totalitarian ethos and instincts.

The Dhimmi-crats have destroyed people’s businesses, livelihoods, mental health and their ability to be self-sufficient. Where is the outrage that should rightfully be directed at the vile Dhimmi-crats, for their utterly callous and indefensible Wuhan virus totalitarianism?

The misery is a feature, not a problem. When a people are afraid and suffering they tend to look to the government to “fix” the problems. That is exactly what all the Wuhan ChiCom Flu fear and resulting misery is about, encouraging the people to ask for more government intervention (particularly from the Socialist/Communist Party Nanny State). That Party believes many/most of the people aren’t quite smart enough to figure out who or what is causing the misery, particularly when the most frequently used sources of news and information are working hand in glove with the Socialist/Communist Party. I can’t categorically state they are totally wrong in their belief.

On what ship? There are no cruise ships leaving U.S. ports.

A cynic might think the US cruise industry is being punished for the crime of having a Republican governor in Florida, but the Harris-Biden administration wouldn’t do that, would they?

The cruise companies are working around the ban by simply cruising to and from the Bahamas, which cuts out a large number of US jobs and income. No doubt a certain larger percentage of their cruises will remain out of the US grasp in future years. Thanks, Joe.