As a federal judge, Hastings was tried and acquitted on charges of conspiracy to solicit a bribe in 1982, but in 1988 he was impeached by the then Democratic lead House on charges of bribery and perjury. The Democratic Senate convicted Hastings in 1989. 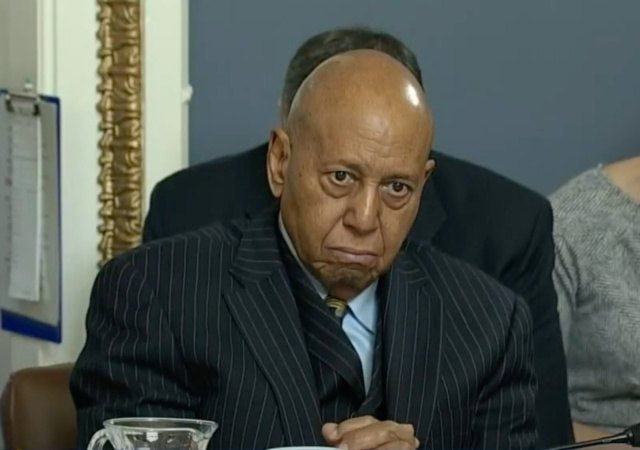 Longtime Democrat Congressman Alcee Hastings passed away after being diagnosed with Stage 4 pancreatic cancer. Hastings was elected to represent FL-23 from 1993 until 2013, and FL-20 from  2013 until his death.  The Congressman’s passing was announced on his official Twitter account this morning.

Prior to serving in Congress, Hastings was Florida’s first black federal judge. He was nominated by President Jimmy Carter in 1979 and impeached 10 years later, in 1989. Hastings was tried and acquitted on charges of conspiracy to solicit a bribe in 1982, but in 1988 he was impeached by the then Democratic lead House on charges of bribery and perjury. The Democratic Senate convicted Hastings in 1989.

According to Politico, Hastings was also investigated last session by the House Ethics Committee for having a relationship with a staffer.  The investigation was closed after Hastings married the staffer.

Hastings’ death has been met with both praise for his efforts in the civil rights movement and reminders of his tumultuous career.

I had the misfortune to hear NPR's brief report on this man. No mention of his shady past. A year or so ago a major Florida newspaper published a long & severely honest article about Hastings. What a crook!

.@RepHastingsFL was a civil rights leader, gun reform advocate, and a proponent that was instrumental in instituting positive change. We need more leaders working as hard as Rep. Hastings did Congress. He pushed the issues that mattered to Floridians. He will be missed. #Florida

U.S. Cong. Alcee Hastings (Fl) had more Articles of Impeachment filed against him than any other person in U.S. History. His passing is sad, for his friends and family, but let’s not go crazy with the “professional accolades.”https://t.co/rZtN2XjySy

Sending my sincere condolences to the family, friends, and staff of Rep. Alcee Hastings.

He was a beloved member of the Congressional Black Caucus who fought tirelessly on behalf of his district. He will be deeply missed.

Hastings’ death decreased the Democrat majority in the House, 218-211.

Thanks for the notice. Poured myself a double shot of the good stuff tonight — not to celebrate the old gun-grabbing bas*rd’s life, but to congratulate him on finally surrendering it.

Hastings was as crooked and racist as they come.

The CBC will miss him.

How did he hold office after being impeached and convicted? Does that rule only apply to Republicans?

At least at the time of his Senate convictions the ban wasn’t considered mandatory*. The Senate could separately consider whether to institute a lifetime ban on holding Federal office. The Senate did so and declined.

* I’m unsure whether this has changed or whether it only would have been mandatory should Donald John Trump have been convicted in either of his Senate Trials on House passed Articles of Impeachment.