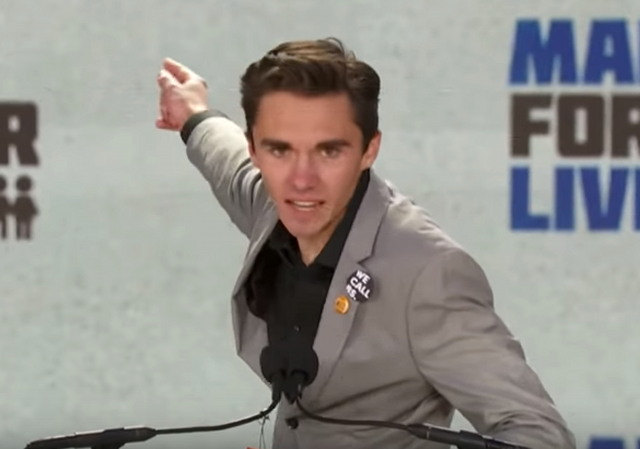 Back in February, anti-Second Amendment activist and wokester David Hogg launched into a pillow fight with MyPillow founder Mike Lindell and vowed to put him out of business with a line of progressive pillows.  Yeah, it was stupid.  And now, it’s over.  At least Hogg’s role in it is, anyway.

Hogg announced his decision to quit the woke pillow venture on Twitter.

8: The reasons for my departure rest entirely with me and my own personal commitments and I truly wish Will nothing but the best.

Parkland shooting survivor David Hogg says he’s giving up his role in the pillow company he launched to compete with conservative MyPillow CEO Mike Lindell — and going back to activism.

Hogg, 20, announced on Twitter Saturday “resigned and released all shares, any ownership and any control of Good Pillow LLC” effective immediately.

“The reasons for my departure rests entirely with me and my own personal commitments and I truly wish (co-founder William LeGate) nothing but the best,” he wrote.

“Over the next several months, I will be taking some time to focus on my studies in college and advance the gun violence prevention movement with March For Our Lives and personally.”

Hogg — who was a Marjory Stoneman Douglas High School student during the slaughter in 2018 — said in early February that he was working with LeGate, a tech entrepreneur, on a rival pillow firm.

He claimed the “progressive competition” could put Lindell, who hawks patented foam pillows on infomercials, out of business.

The so-called pillow fight had been greeted with ambivalence by Lindell himself, who had responded to Axios that there’s “nothing wrong with competition that does not infringe on someone’s patent.”

As you can imagine, people have thoughts.

ie, The self promotion side was running out of steam and all that was left was the hard, risky, and thankless grind of running a new busines.

Actually you're just a dumb fuck with no talent for anything but spouting unsubstantiated rhetoric. Thanks though; I had a grid bet with some friends and 3 months was one of my squares. I won $240! I just got home from a party with 7 buddies. I spent the money on a Wagyu steak.

Translation: when you learned it would take actual work to run a successful business, you tucked your tail and ran.

1) Correction David Hogg was not at school when the shooting occurred therefore cannot be a “survivor” by definition.
2) Wagyu steak. Nice!!

Totally missed the icepick. The icepick would have been:

Hogg looks like he’s auditioning for a remake of “Saturday Night Fever”.

1) Correction David Hogg was not at school when the shooting occurred therefore cannot be a “survivor” by definition.

That is not true. The truth about this kid is bad enough, there’s no need to lie about him. By doing so you’re doing the same as him.

I will concede to you that he was on campus during the shooting. But he is NOT a “survivor.” He was no where near where the shooting took place. Under his definition, I can say I was a survivor of a car accident that only involved cars that were on a different road than the one I was on.

But nice job continually carrying on the David Hogg narrative.

The fact of the matter is that Camera-Hogg removed himself from this company because he is an agitator who cannot understand the work it takes to build a company from scratch and make it profitable. If he ever intended to make it profitable.

He should find a nice liberal sugar momma.

I’m thinking the crazy one from Who’s the Boss.

Oh what a pair.

A long-forgotten television series of some sort.

Yeah that’s the one!

They said the same thing about Jayne Mansfield.

Grizz…. most of these folks are not old to know who she was!

That occurred to me after I clicked Submit.

Oh, well… nothing toose our heads over.

to lose… I can’t even make a tasteless joke with a typo to wreck it.

He’s had one for years: Shannon Watts.

I know this kid’s not trying, but if he tried, he couldn’t be more of an idiot.

He IS trying, VERY trying!

I hope Harvard is happy with the results. Virtue signaling sometimes comes with a big cost.

More like a pompous ass, that seems to be his natural talent.

Hope he pissed away a lot of other people’s money. Money ‘invested’ by the leftwing fools who financed him.

How green. If only money mattered. This is a currency cause. Biden et al are set to redistribute trillions, even before the Green new deal.

More likely it is salted away in some numbered account.

Why doesn’t he begin a campaign to keep the “Woke” policies out of the public schools? After all, it was Obama’s and Arne Duncan’s Promise Program that caused the problem in the first place. Maybe little Davey isn’t well versed enough in reading comprehension to be able to read and understand what the Promise Program was all about and why it caused the senseless deaths of his classmates at MSDHS! Instead, he listens to the rags in the MSM “Fake News” and believes every lie they tell! Read on the programs little boy and you might just learn something. I realize that it requires both time and effort and assumes that you can comprehend simple English but it is all there in print. I read it first on your district webpage shortly after the mass murders. I also read in your local paper about the times the Sheriff’s department “visited” with the murderer but were told to stand down because of the agreement between the “woke” school system and the department. Bet they regret doing that. Or maybe they don’t. I never did read or hear that either Obama or Duncan had any remorse for their deadly policy.

Little Davey was getting “woked “” in an Advanced Placement Envíronmental Science class at the time the shooting started. His first thoughts while secreted in a closet were how quickly he could get home and get his camera to record the aftermath and also how he could get on Fox News to trash the “NRA types”
Never let a good crisis go to waste!

I’m woke and drowsy. What do you mean “work”. That said, social justice anywhere is injustice everywhere.

A university that has evolved into a punchline.

Your next needs to be something a little more modest, like joining a boy band.

But first, you may want to buy a MyAutotuner from Mike Lindell.

Davey needs an adult to manage and exploit him properly, like Greta has. Then he might avoid these embarrassments.

Shannon hasn’t been doing a bad job of leashing the boy, but it’s not an easy task. Michael Moore actually had to physically snatch the mike out of his hand when he started earnestly soliciting a Canadian audience to donate to the campaigns of US Democrat candidates (a federal crime).

I would not be surprised if Moore’s problem was that it was public, they may well have had a different conversation in private.

What a sad, hollowed out, and angry young man…

I guess the tier one funding dried up with no tier two in the offering, ie, fooled once, shame on you, fooled twice, shame on me.

As a survivor of Marjory Stoneman Douglas High School (I wasn’t even in Florida but I did survive to tell the tale), this clown is offensive.

I am a survivor of the Marjory Stoneman Douglas High School shooting, too! I was in Highland Beach a few days before. I had the same chances of getting hit by a bullet as David did.

Of course, I haven’t seen you at any of the Parkland shooting survivor support group meetings. I meet some very interesting people there, and the snacks are fantastic! I met one young lady who is a bit wacky, yet HOT AF!!! Her name is Marla Singer.

Oh, wait. I met her at another survivor support group meeting… there are sooooo many!

Hogg is destined to be a Democratic politician. Another hustler among many. If only Democrats would give up the hustle. He will be like that lady in Texas, Wendy Davis, with her pink filibuster sneakers.

Reminds me of Jon Ossoff and Pete Buttgieg but he can’t speak like Buttgieg, yet. If he learns how to string together a.stream of pretty words with no real meaning, he will join these winners.

Little Ms Priss needs a pillow for his “throne” companion.

In a way it’s kind of a shame. I would have liked to see this young man become acquainted with the work of actually producing something tangible that’s of real use to his fellow man. It would have benefitted him to learn what goes into being an employer and a business owner, what it means to be responsible for the livelihoods of families. It would have made for a better education for him than remaining in the orbit of “activists” and “influencers”.

If you want to reflect on just how bad America is screwed up today, realize that we apparently all read the phrase “woke pillow venture” without stopping to realize how hilarious the phrase itself is.

Daughter started college at 15, graduated at 19, Masters in Math before reaching age 21. Applied at Penn and Dartmouth but not good enough for them – maybe not the right demographic or a Leftist Freak like Hogg. LOL