Report: Capitol Hill Suspect Described Himself as a ‘Follower of Farrakhan’

Report: Capitol Hill Suspect Described Himself as a ‘Follower of Farrakhan’

One officer passed away. 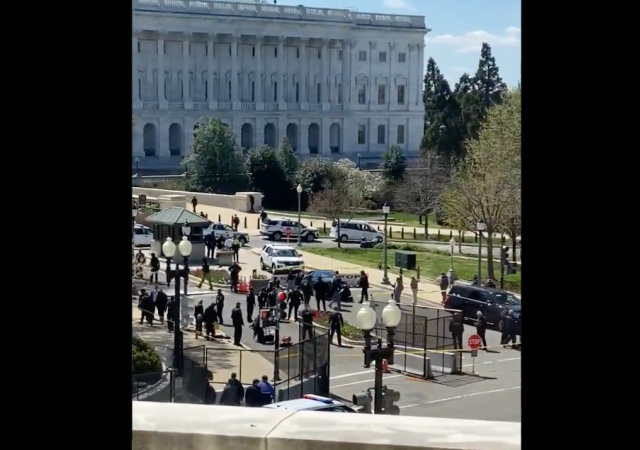 The U.S. Capitol Police stated that two officers received injuries after someone rammed a vehicle into the barricade along Constitution Avenue.

***This is breaking news. We will update as more information comes in.

Reports indicate the suspect was a follower of Nation of Islam:

Noah Green, 25, who may have been living in Virginia, described himself as a “Follower of Farrakhan” on his Facebook page, in reference to Nation of Islam leader Louis Farrakhan.

“I was on the right track and everything I had planned was coming into existence. It required long hours, lots of studying, and exercise to keep me balanced while experiencing an array of concerning symptoms along the path (I believe to be side effects of drugs I was intaking unknowingly),” he wrote on March 17, signing the message Brother Noah X.

“However, the path has been thwarted, as Allah (God) has chosen me for other things. Throughout life I have set goals, attained them, set higher ones, and then been required to sacrifice those things,” he continued.

“This has been an extremely difficult time for US Capitol Police after the events of January 6, and now the events that have occurred here today. So, I ask that you keep our US Capitol Police family in your thoughts and prayers,” Pittman said. One police officer died as a result of the Jan. 6 Capitol riot, and two subsequently died of suicide after the attack.

Chad Pergram with Fox News tweeted “the suspect go out of car with knife and was shot by USCP.” They shot him after he hit the officers with his car.

CRITICAL INCIDENT: USCP is responding to the North Barricade vehicle access point along Independence Avenue for reports someone rammed a vehicle into two USCP officers. A suspect is in custody. Both officers are injured. All three have been transported to the hospital. pic.twitter.com/4TXIdulJc6

Due to the external security threat at the North Barricade of the U.S. Capitol, the following road closures are in effect:

Appears that a car smashed into the barrier. Two people are on stretchers. Can’t see whether it’s an officer or civilian pic.twitter.com/Ud5WYGyKFu

I’ve grown so cynical, my default thinking is false-flag incidents to justfiy more clamping down on freedom.

This may not be a Reichstag Fire – level of incident… maybe just the German soliders in Polish uniforms invading a radio station,

The MSN has already started with the insurrectionist storyline and the incident happened only about an hour ago.

BTW, the external security threat tweets started coming after this happened; they’ve got the Capitol and its office buildings locked down so they’re telling people inside the buildings they can’t leave and anyone outside they can’t get in until they determine for certain this was an isolated incident.

MSM, which I’m sure will include MSN, so it’s not that much of a typo.

They have already ruled out terrorism without any investigation at all and so we can assume the driver wasn’t a white man. Good chance his first name was Mohamed too.

No, his name was Noah Green. I say “was” because he was shot dead. Of course, if he had been a white person he wouldn’t have been shot. But there you go. (<–that was sarcasm if you didn't realize it. 😁 )

Close. He was a member of the Nation of Islam. You know, the group that preaches racial tolerance and the respect for other religions (/sarcasm).

This story story will be gone from the MSM rotation by tomorrow morning.

Nation of Islam is also has a deep affection for Jewish people.

A person of color was shot by a cop and all the person of color had was a knife! Where are the largely peaceful protests? Where is the condemnation? Al Sharpton – where are you in our moment of need to correct and heal the nation from this institutional racism?

The MSM and MSN et al have become the boy who cried wolf.
Absolutely nothing they report can be taken at face value without deep suspicion.

Strange that it was a different narrative when nut jobs where trying to get onto the grounds when Trump was in office. I remember the Twitter “resistance’ groups applauding any attempt on him. Wonder what changed??

During Trump leftists rejected the election based on Hillary Clinton’s/Comey’s/Biden’s RUSSSIIIAAAAAAA!!!!!! attack which is identical to Trump’s “stolen by voter fraud I won” lie (both have zero merit and are told by horrible people who lost elections) and if this turns out to be political it just might turn out both inspired violent attacks by people who believe in them because the prospect of your country being conquered and an election loser installed gives enough rage that evil starts looking like good.

Watch them try to spin this into some white supremacy “insurrection” b.s. Wouldn’t surprise me one but.

Or even one bit.

…a media leftist learning yet another “white supremacy” incident wasn’t.

Being a media leftist these days must be like belonging to one of those doomsday religions. So much disappointment.

“Watch them try to spin this into some white supremacy “insurrection” b.s.”

Easy. He is living in a white supremacist nation founded on white supremacy in which every institution and habit is founded upon the singular idea that the white race must rule over each and every other race that exists, in the collective mind of the white USA, to serve the white race. After all, the President lives in the White House. The Capitol is a big white domed building. The Washington Monument, a tribute to the Father our Our Country, is a huge erect white phallus. Living under such oppression, Mr. Green, who was not actually Green, by the way, had no choice but to physically and forcibly strike out at the white supremacy in a positive and constructive act of anti-racism. And yet, for this, he was shot – shot dead by this very white supremacists and institutionally racist country he sought to make better.

Being a sanctimonious liberal is easy. You can make up and stupid detached from reality drivel you want.

My condolences to the dead and injured, and their families and friends, to include Mr. Green, who was either mentally unbalanced or incited into a froth of murderous derangement by the vitriolic, malicious, and wrongful rhetoric of those who hate our country, its people, traditions.

They’ll likely turn him into some “victim” of white supremancy therefore, his actions while terrible, are justified. If only a social worker had been on scene, he’d at least be alive. (Dripping with sarc)

It appears the suspect is a non white male who exited the vehicle with a knife and was shot. Probably memory holed by the weekend.

Black who identifies as white?

Well, don’t know how he chooses to identify, but he is Black.

The late alleged assailant used to identify as black.

Sorry, should have said, “was carrying a semi-automatic assault knife.”
Come on, man, the Democrats need to find something here.

Memory holed….After the communist clergy in the media notes he was no doubt enraged by white supremacy, white privilege, and systemic racism. Collectively these ‘root causes’ were formerly referred to as ‘capitalism’.

The important thing here, is if he was a white perp doing the same thing , he would have been shot.

Can’t wait for Lester Holt to “filter” this for use, so we will know what “really” happened.

For what it’s worth, from the Daily Mail;

“The suspect has been named by NBC as 25-year-old Noah Green from Virginia. According to his Facebook page, he is a follower of Nation of Islam”.

It is a shame real Muslims can’t sue those racialist fascistic frauds for use of their name and real Jews can’t sue the Black Hebrew Israelites for the same thing.

I wonder if the cops he targeted with his car were white.

The dead officer was White.

“The dead officer was White.”

That’s supposed to be a good thing, right? Or does the color of a dead police officer not matter as long as they are dead? Or is it the color of the perpetrator that is supposed to cause revulsion? Or is it some combination of the above? These are confusing times. It’s hard to keep up. Please do not rely upon me for expert opinion on these matters.

“Please do not rely upon me for expert opinion on these matters.”
That’s not very brave Sir Robbin.

A.black named Noah. A cultural appropriation if ever there was one.

Time for a national conversation on black racism.

That should have started when blacks and their allies were going after Zimmerman.

From the police report… “At least one officer drew their weapon…”. One officer = their? Is that the pronoun thing?

Yes. The officer might identify as an X-Wing Fighter.

Caveat: The Nation of Islam is itself a mental breakdown….

How will the media make this into Trump’s fault?

Pittman: “One police officer died as a result of the Jan. 6 Capitol riot”

Is this a verified fact?

No. It is not. A largely peaceful protestor was shot and killed by a police officer. This is confirmed.

And it’s not even assured that his death was connected to the riot in any way, since it occurred after he came home and acted completely normal for some time. Though the Democrats are demanding you agree that it was.

Source that he died at home coming shortly?

So this is fake news from Fox. Shameful.

I think it is worth remembering the race based ideology of Nation of Islam got the man so angry that this looked like a good thing to him, but I doubt it was just Nation of Islam.

Could part of the lies he was fed that made him furious enough to think this was good have been the white cops gun down unarmed black men narrative? Or perhaps the systemic racism narrative; if you succeed as a black man it is despite society and you would have done much better otherwise, if you fail it is because you never had the chance, or the idea that half the country hates you cause your black….

We need to stop giving the left grace for when their lies and misinformation cause murder, and start talking about the ways they incite violence.

The worst example of systemic racism are blacks.

Had this been a white male suspect, the manipulative media’s narrative would justify and support the need for Capitol Hill security. A white male would have been the media’s preferred narrative.

However, with the disturbed suspect’s race and ideological characteristics are now identified by independent sources, The press will soon drop the story, and the story will disappear quickly.

There are nut jobs of every political persuasion, but many more of them are on the left. Most likely, Noah Green will join James Hodgkinson, Ahmad Al Issa, the men who murdered Donald Trump supporters in Portland and Denver, and many others in the media memory hole.

Will the Congressional Democrats include Mr. Green and his mentors in their “9/11 style” investigation into attacks on the U.S. Capitol?

After all, Mr. Green, unlike the protestors of January 6, actually murdered a D.C. Capitol police officer.